If there is such a target, similar to NTRK gene fusion, which is rare, but exists in pan-solid tumors, and there are drugs available, would you know about it?

What is the probability of a positive NRG1 gene fusion?

How do you define a rare target?

2. Low frequency: less than 5% (or lower than ALK frequency);

3. Functionally must be a driver gene;

4. There must be medicine available.

NRG1 is a protein,  Plays an important role in healthy organizations!

NRG1 is the abbreviation of NeuReGulin 1 (Neuromodulin 1), sometimes also called HRG (HeReGulin, regulatory protein). NRG1 can refer to the NRG1 gene or the NRG1 protein. Healthy cells throughout the body use the genetic information in the NRG1 gene to produce NRG1 protein, which has multiple functions and is essential for the development of the nervous system and heart. 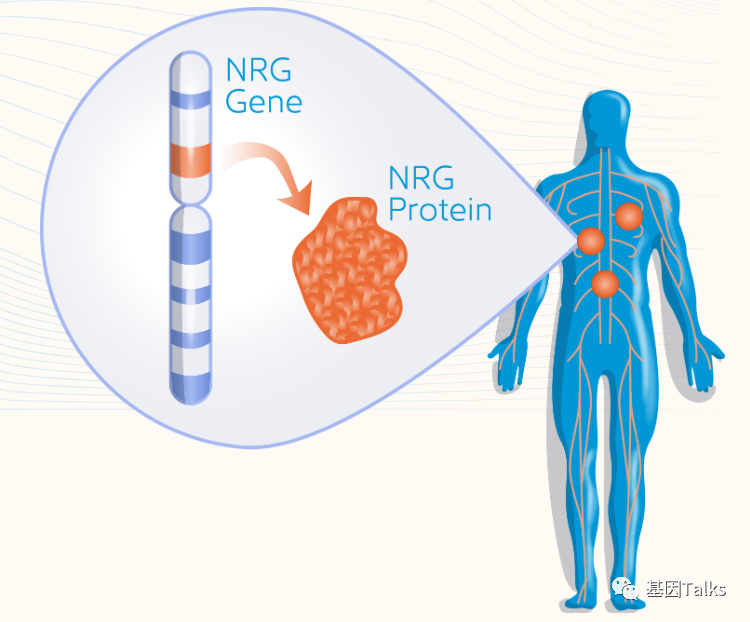 NRG1 rare fusion mutation, It will cause cells to produce NRG1 fusion protein by mistake!

NRG1 fusion can activate the HER3 pathway by degrees, Turn normal healthy cells into cancer cells!

The NRG1 protein mainly binds to the HER3 (ERBB3) receptor on the cell surface, and then sends a signal to the cell to perform certain actions that are essential for its survival and proliferation.

Normal cells usually regulate the production of NRG1 protein to avoid uncontrolled growth. However, in-frame fusion of NRG1 gene can lead to excessive accumulation of NRG1 fusion protein on the cell surface (activate and retain the EGF-like domain of NRG1 protein), and activate HER3 (no kinase domain) when it should not be activated, and HER3 can interact with HER2 (with kinase domain) binds to form a heterodimer, which activates downstream signaling pathways (MAPK and mTOR). This unregulated activation may lead to cell proliferation and differentiation, thereby promoting tumor occurrence. 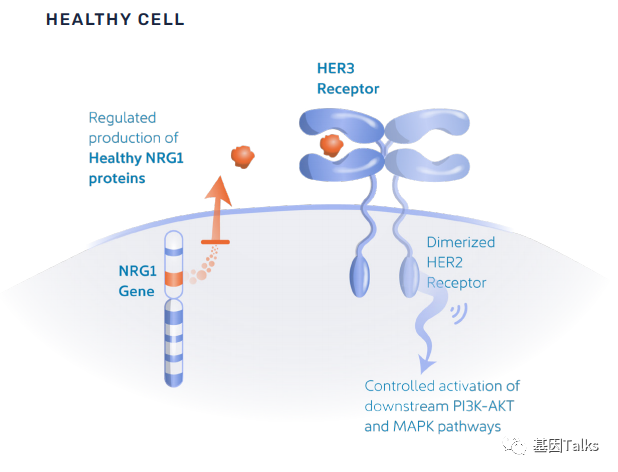 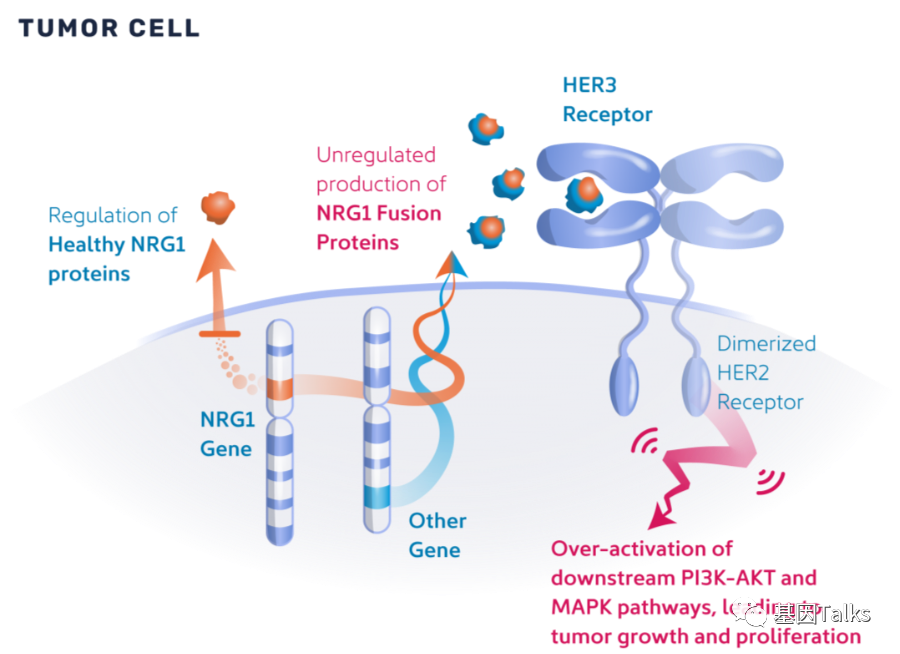 The identification of driver gene mutations has changed the treatment of cancer. Whenever a new driver gene is found, new therapies can be developed to specifically target them and precisely inhibit tumor growth and survival. 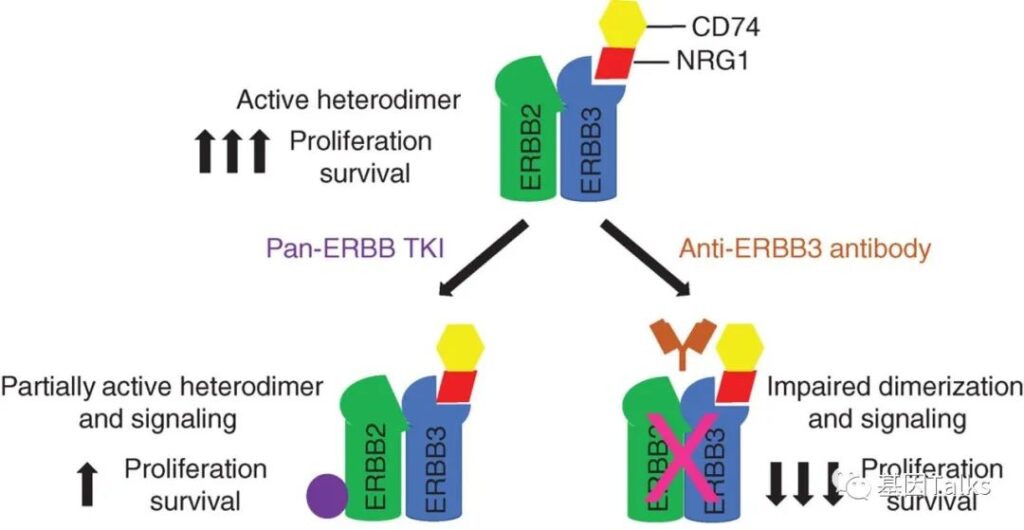 Currently, the FDA/NMPA has approved a variety of targeted therapies to inhibit known driver gene mutations, such as EGFR, KRAS, BRFA, ALK, ROS1, MET and other mutations. In the past two years, two TRK inhibitors have been approved by the FDA for the treatment of pan-solid tumors caused by NTRK gene fusion mutations. This approval is based on data from clinical trials that show targeted targeting that matches the driver gene mutation. Compared with the traditional standard treatment, the treatment significantly improved the patient’s prognosis.

NRG1 driving gene fusion mutations have now been determined to require new targeted therapies. Patients with NRG1 fusions usually do not respond well to treatment with standard chemotherapy, chemotherapy immunotherapy, or new immune checkpoint inhibitors (such as PD-1/L1 monoclonal antibodies, etc.). NRG1 fusion is also associated with poor overall survival and disease-free survival. For patients with NRG1 fusion, treatment with HER2 inhibitors (indirect) or HER3 inhibitors (direct) in clinical trials may be an important way to prevent tumor growth. 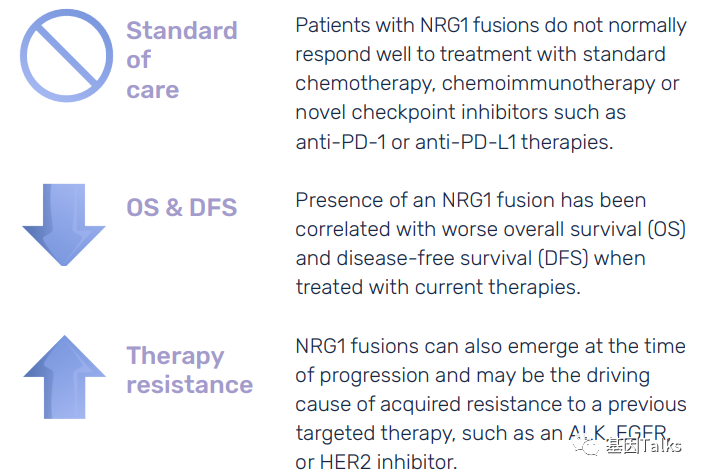 Afatinib and Seribantumab, etc., It is a targeted therapy for patients with NRG1 gene fusion!

In principle, afatinib, a targeted drug targeting the kinase domain of HER2 (ERBB2), is a targeted drug that can inhibit the continuous activation of the ERBB2/3 pathway due to NRG1 gene fusion.

Secondly, monoclonal antibodies targeting HER3 are also feasible, such as the HER3 monoclonal antibody Seribantumab. When Seribantumab binds to HER3, the NRG1 fusion protein cannot bind to HER3, thereby preventing the HER3 signal that maintains tumor activation. By blocking the homodimerization or heterodimerization of ErbB, the downstream signals that lead to cell growth can be blocked, thereby inducing tumor cell death. 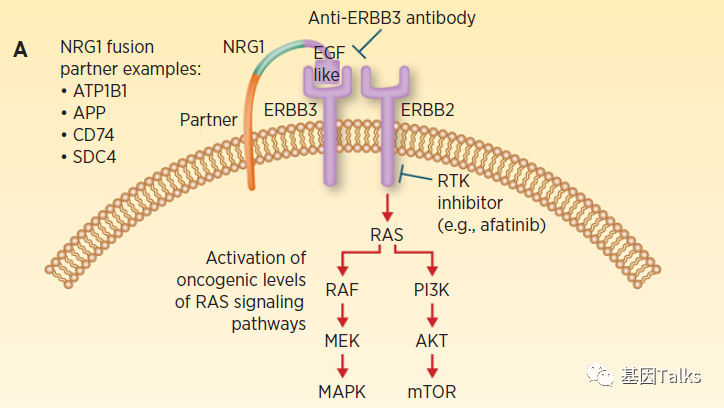 NRG1 fusions have been found in more than 10 solid tumor types, including many tumors that are resistant to standard treatments, such as breast, ovarian, colorectal, kidney, bladder, and sarcoma. Nowadays, NRG1 gene fusion is considered to exist in all solid tumors, with an overall incidence rate of 0.2%.

Emerging studies have shown that certain cancer subtypes may have a higher NRG1 gene fusion rate, such as invasive mucinous adenocarcinoma of the lung (IMA), which occurs in 27-31%, and pancreatic ductal adenocarcinoma (PDAC) Among them, the incidence is 6%. With the improvement of testing methods and more patients receiving NRG1 testing, the detection rate of NRG1 gene fusion is expected to increase.

Recently, the FDA has begun to recognize some “non-tumor related” precision targeted therapies for oncogenic driver gene mutations, which means that they may be effective no matter which organ the tumor is located in. Therefore, once the NRG1 gene fusion is detected, it can be considered to be included in a HER2 inhibitor or HER3 inhibitor targeted therapy clinical trial.

Tumor genetic testing,   This is the only way to confirm the NRG1 gene fusion!

At present, if it is necessary to determine whether a tumor patient carries the NRG1 gene fusion, the only way is to perform genetic testing on the tumor. 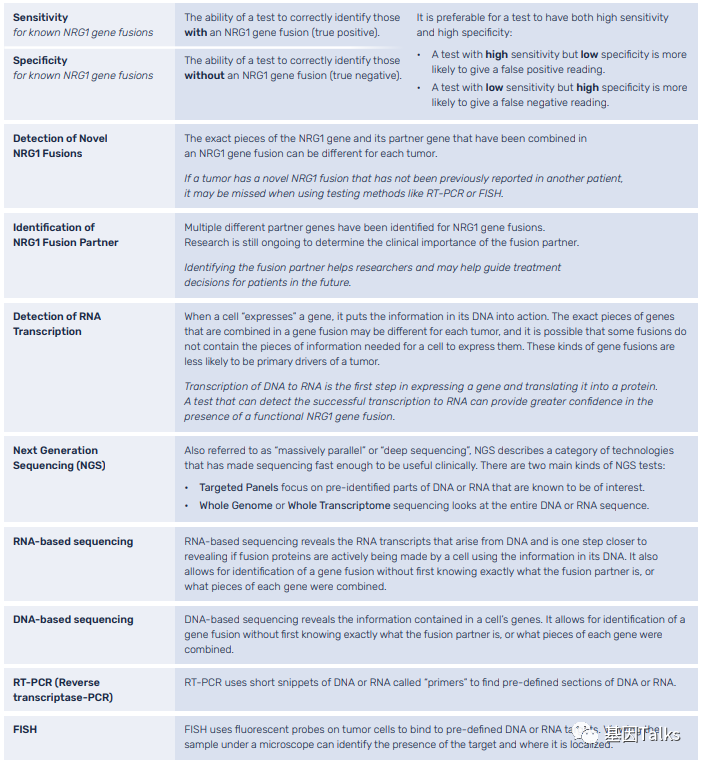 NRG1 gene fusion, new hope for targeted therapy!
The oncology community must be aware of its existence!