The most complete cancer driver gene summary. The most comprehensive collection of cancer driver genes: 28,000 tumor samples, 66 cancer types covering 568 driver mutation genes. Understanding the mechanism of cancer cell transformation is the key to developing cancer screening methods and treatment methods. The key to achieving this goal is to identify mutated genes that can drive tumors.

Today, the editor is sharing with you a paper entitled: A compendium of mutational cancer driver genes published by the research team of the Institute of Science and Technology in Barcelona, ​​Spain in Nature Reviews Cancer.

This work identified 568 cancer driver genes by analyzing the genomes of 28,000 tumor samples from 66 cancer types.

The main feature of cancer is abnormal and uncontrolled cell growth caused by genetic mutations. These mutations are called driver genes because of their ability to drive tumorigenesis, and their mutant forms affect the steady-state development of a series of key cell functions.

One of the main goals of cancer research is to find these cancer driver genes in different types of tumors. The identification of key oncogenes is closely related to the development of targeted cancer therapy, and directly affects cancer prognosis and treatment.

The article is mainly divided into two parts: 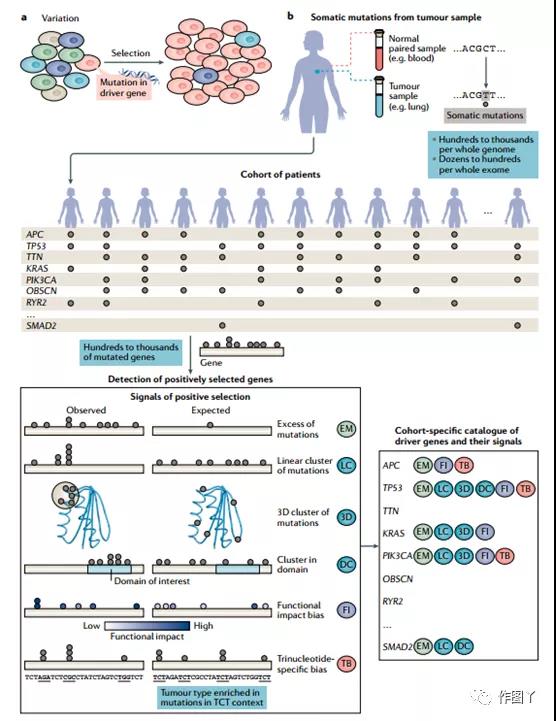 In order to identify driver genes in a comprehensive and systematic manner, this work collected 221 data sets of 66 cancer types, totaling 28,076 samples.

Tumor samples of the same cancer type are sequenced and analyzed uniformly. The number of coding mutations in a tumor varies with the type of cancer, and a certain degree of heterogeneity is also observed in a given tumor sample. 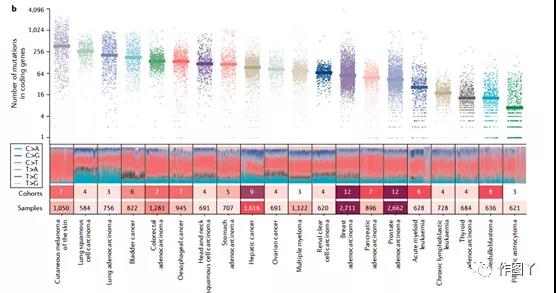 As early as the early 20th century, Peyton Routh was able to use cell-free extracts from diseased animals to spread tumors to healthy birds, indicating that units smaller than cells are the cause of tumors.

In the decades from 1940 to 1980, advances in biochemistry and molecular genetics promoted the development of laboratory methods such as positional cloning, reverse transcription, and Sanger sequencing. The application of these methods in cancer research identified the first cancer driver gene, named after the mutation that drives tumorigenesis.

Although there are normal alleles in the cell, the introduction of defective oncogene copies is sufficient to produce transformation, so it can be concluded that the mode of action of oncogenes is dominant. By the mid-1980s, it was recognized that there was a second cancer gene, the tumor suppressor gene.
Unlike oncogenes, cell transformation is caused by the inactivation of tumor suppressors, which usually requires the loss of activity of two alleles of the gene.

The view of tumorigenesis is that only a few driver gene mutations are considered to be the origin of malignant tumors.

Therefore, the vast majority of tumor mutation genes have nothing to do with tumorigenesis: that is, most mutations in tumors (passengers) are not drivers.
The principle behind driving mutations is that tumorigenesis follows Darwinian evolution characterized by mutation and selection.

Different types of mutations occur at different frequencies in different cancer types, and the mutation rate of the human genome is highly heterogeneous, so the driving detection method is affected by the heterogeneity of the background mutation rate.

Schematic diagram of the IntOGen method: divided into three levels

(1) Pre-processing steps: ensure that the input is received in the correct format and operating parameters (deduplication of samples extracted from the same tumor, or deletion of samples with abnormal proportions of non-synonymous mutations or hypermutation phenotypes).

(2) Seven driver gene identification methods (dNdScv, OncodriveFML, CBaSE, OncodriveCLUSTL, HotMAPS, smRegions, Mutpanning) each method is combined through weighted voting to generate a list of driver genes for each queue. The result is more sensitive than a single method. High, the specificity remains unchanged. 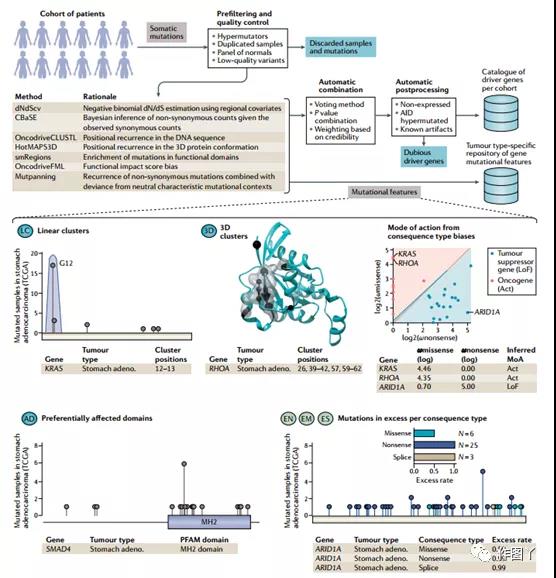 The Cancer Gene Census (CGC) database serves as the “gold standard” (‘ground truth’) for this work. Three-quarters of the 568 mutation driver genes identified have been annotated in the CGC. Figure a shows the number of cancer driver genes for each tumor type (overlapped with CGC).

The article identified 152 potential new driver genes (unannotated genes in CGC).
For many classic driver genes, this work reveals their role in a wider range of cancer types. (For example: The somatic mutation pattern of KMT2C is shown to drive in 31 tumor types. However, it is only a type of medulloblastoma that is annotated in CGC.) 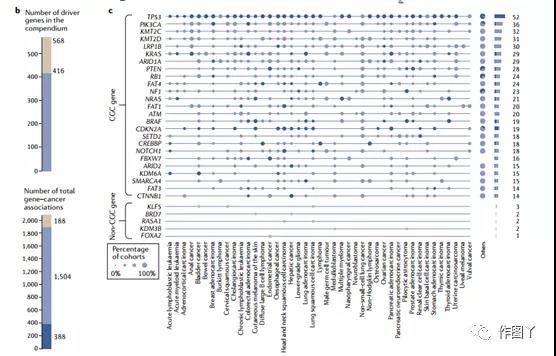 Some genes play a driving role in many cancer types, while others tend to act on specific cancer types. Most genes act as a driving mechanism only in one or two tumor types, and only a small group of genes can act as driver mutation genes for more than 20 malignant tumors. 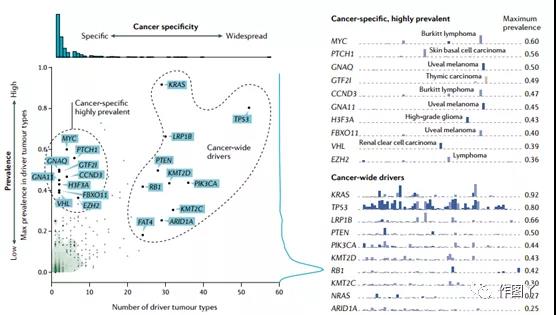 Certain protein domains affected by some driver gene mutations can affect the occurrence and development of more than 10 cancer types. The DNA-binding domain of p53 is clearly enriched in somatic mutations in the group of 42 different cancer types, more than any other protein domain, although this is only driven by TP53. 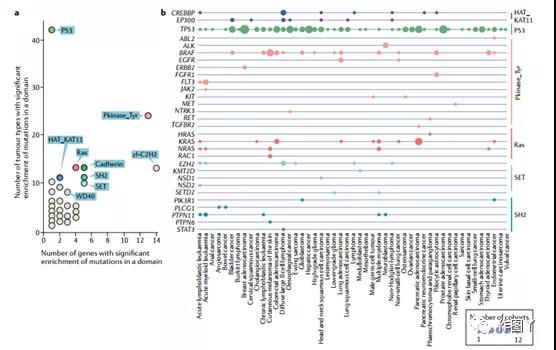 05 The past, present and future of cancer genomics

(1) In this review, the author deliberately focuses on driver mutations that affect protein-coding genes.

(2) Although driver genes are independently identified through positively selected signals, tumors are actually caused by a series of driver mutations.

(3) Finally, it is a challenge to understand how other characteristics besides somatic mutations work together in tumorigenesis. Although almost all tumors contain genomic driver mutations, these are not enough to explain the complete process of cell transformation. 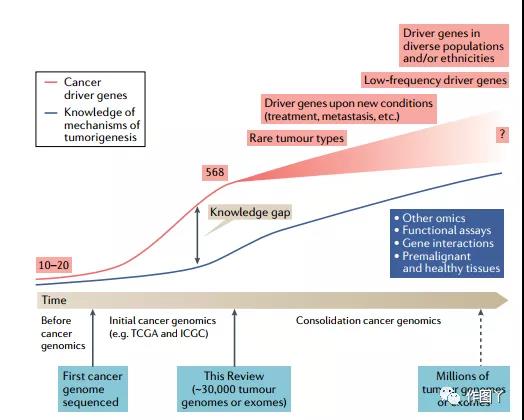 (1) The article is mainly divided into two parts to systematically explain the identification of cancer driver mutations. The first part is mainly a historical review of cancer genomics. The second part mainly explains the working principle and analysis content of the developed IntOGen method. Finally, the work is analyzed and evaluated through the heterogeneity of driver mutations in cancer and the comparison with oncogenes in the CGC database.

(2) The article elaborates on the development history and future prospects of cancer genomics. Insights into the impact of driver mutations on cancer will be the basis for transforming cancer genomics into precision cancer medicine.

Finally, attach the IntOGen website: https://www.intogen.org/search
All 586 driver oncogenes and driver genes corresponding to each cancer type can be downloaded.