Summary of Mechanism and Strategy of Gene Therapy in Disease Treatment

Summary of Mechanism and Strategy of Gene Therapy in Disease Treatment.

Gene therapy is often described as a treatment method that manipulates defective genes by transferring DNA to an individual to alleviate diseases that do not respond to drug therapy.

Therefore, the prospects for the success of gene therapy may have a positive impact on the lives of millions of people. This article reviews the principles of gene therapy, various methods involved in gene therapy, clinical applications, and its advantages and disadvantages.

The gene delivery system consists of three components, as shown below, based on the plasmid gene expression system, which regulates the function of genes in the cell, and the gene represents the target protein. The success of gene therapy depends on the stability of foreign gene molecules in host cells.

In many systems of the human body, there are many kinds of cells used for genetic modification, such as epithelial cells (Table 1). 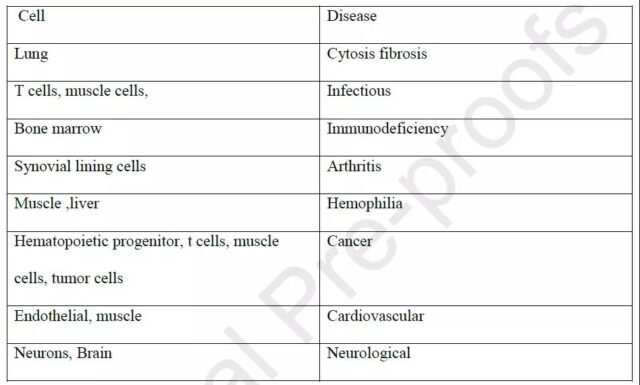 It should be noted that there are different options for gene therapy, each with its own special characteristics, including somatic cells, reproduction, and prevention techniques (Table 2). Somatic cells refer to the delivery of a gene to body cells, which is not conducive to reproduction; germline strategies require a piece of DNA to be placed in the human body so that it can produce sperm or eggs in the human body; vaccine gene therapy involves disease Repair mutated genes associated with specific diseases before development. 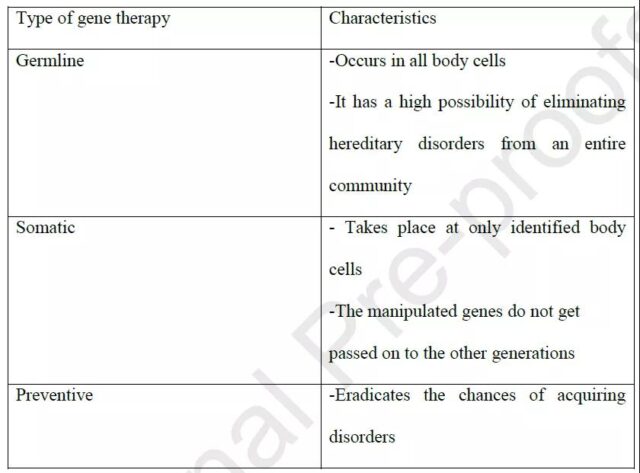 Somatic cell gene manipulation can be divided into in vitro and in vivo techniques: in vitro means that cells are manipulated outside the human body and then injected back into the body, while in vivo means that the process of replacing defective genes occurs inside the cells in the body.

Gene therapy uses a variety of techniques, including enhancement, suppression, and cell destruction. Enhancement and suppression are in vitro gene manipulation techniques because they do not need to eliminate the defects shown in Figure 1. 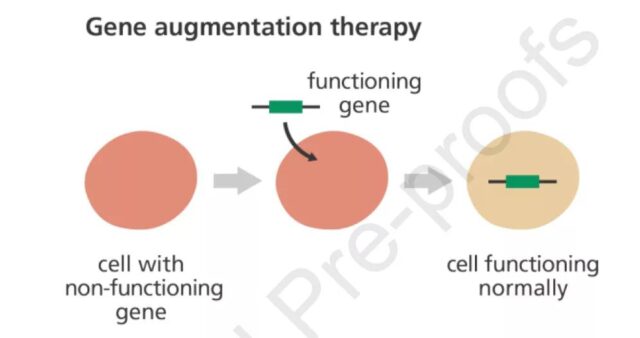 Figure 1: Shows the process of gene amplification in human cells

The significance of gene therapy is that it involves manipulating genes in body cells to treat or control diseases. Genes contain DNA that regulates the functioning of the human body.

This shows that when genes are defective, it can promote the development of diseases. There are three stages of gene manipulation. The first stage of gene therapy is to assess the cause of infection; the second step is to create duplicate DNA matching the defective gene to solve health problems; the last step is to create a system that can introduce new genes into patients The human body, Figure 2 illustrates the entire process of genetic manipulation. 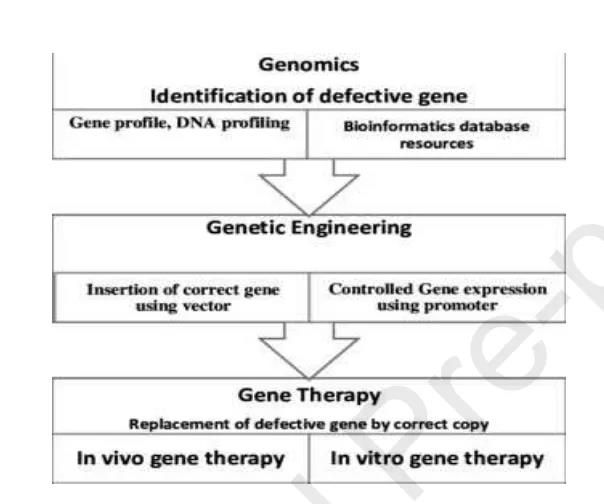 Figure 2: The three stages of the basic process of gene therapy

There are three types of gene delivery systems, including viral, non-viral and mixed. Viral delivery methods use viruses to bring DNA into human cells; the advantage of non-viral delivery mechanisms over viruses is that they can more effectively transfer DNA to the human genome through physical and chemical methods; hybrid methods require multiple features Of genetically modified viruses, and lack of restrictions such as minimum storage capacity.

The method of transferring DNA involves the use of vectors to store replacement genes. Viral vectors are the most common vectors because they can carry normal DNA. The main types of viral vectors are RNA and DNA.

RNA viral vectors use reverse transcription technology to add them to human cells (Figure 3), such as retroviruses and Lentivirus; DNA viral vectors directly introduce genes into the host genome, such as adenovirus, adeno-associated virus, herpes simplex virus and poxvirus. Table 3 below shows the types and properties of viral vectors. 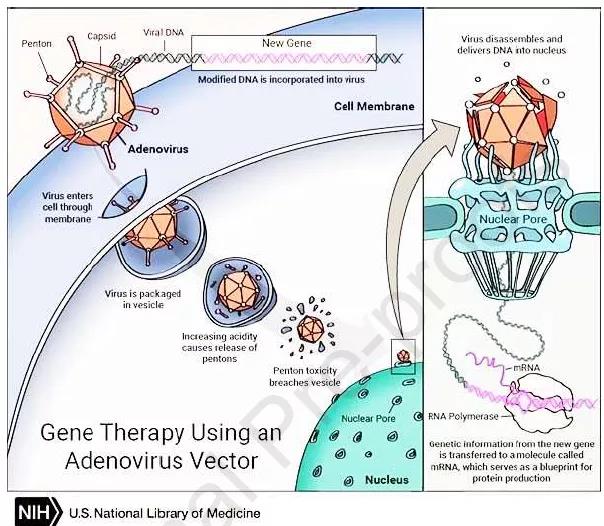 Figure 3: Shows the process of implanting the carrier into human cells 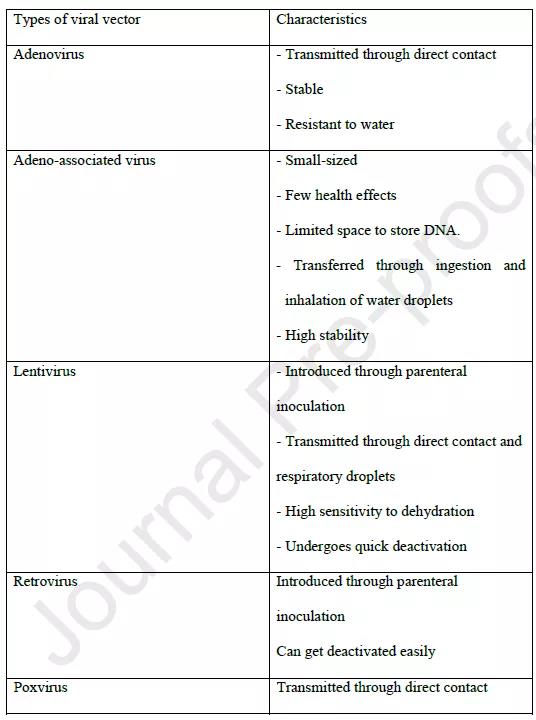 Many factors can cause damage to human DNA, such as bases, radiation and hydrocarbons.

Figure 4 shows that various bases in oxidation genes can promote the development of damage, thereby promoting brain-related infections. When exposed to chemicals such as carcinogens, the influence of bases will accelerate. 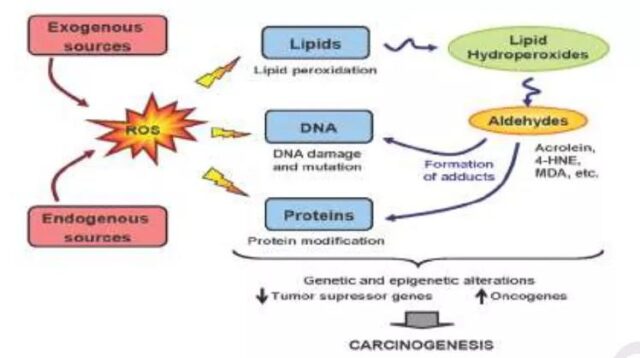 Figure 4: The effect of oxidation on genes

Using gene therapy has several advantages as shown in Table 5. It can prevent congenital disability because germline technology can provide treatment for developing embryos.

Gene therapy includes the use of multiple strategies, such as editing and silencing, to eliminate a wide range of diseases in humans. In the case of defective genes being replaced by functional DNA, it avoids the transmission of diseases, such as breast cancer from generation to generation.

Another generation. Studies have shown that adeno-associated virus vectors eliminate the risk of premature death, heart disease and fibrosis, as shown in Table 4. 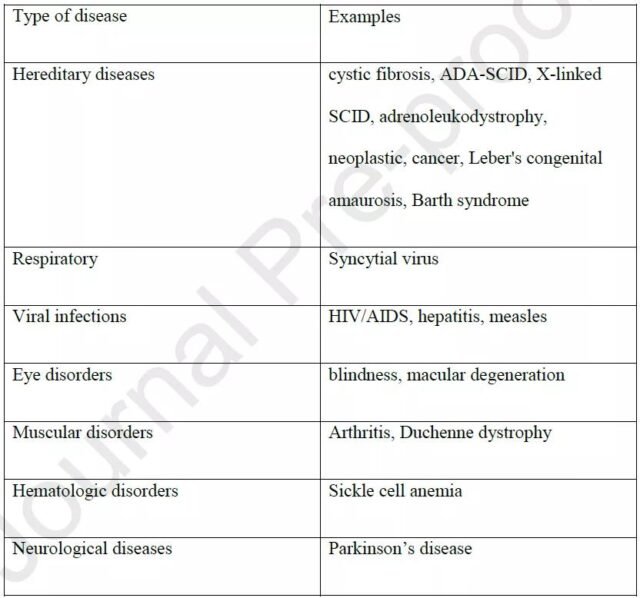 These animals cannot guarantee the success of the operation when the operation is introduced into humans. However, research shows that the use of genetic manipulation for prevention offers hope.

Table 5: Illustrates the advantages and limitations of gene therapy

Nowadays, few vectors can be used in gene therapy. For example, clinical trials rely on AAV-2 vectors when evaluating the impact of this technology on various diseases.

There should be a wide range of highly efficient carriers. When introduced into somatic cells, the effect of automation will be enhanced. This shows that the top precision carriers will make it possible for medical experts to actively target and deal with complex diseases.

The researchers’ goal is to increase the size of the vectors to maximize the number of genes they can bring into the human genome.

Currently, globally recognized gene therapy products, such as Gendicine, Oncorine and Kymriah, have been produced to help control the growth of cancer in patients. The US FDA approved the use of Luxturna in 2017, which has promoted the eradication of retinal infections. Experts are still evaluating to determine gene therapy.

Due to its insecurity, the agency has established guidelines and regulations to ensure the protection of analysts when conducting clinical trials. Scientists may create delivery technologies to introduce new genes directly into patients’ somatic cells without the use of vectors, and may use DNA manipulation in human embryos, which will eliminate genetic diseases before further development.