Nature: Gene therapy can alleviate cancer and dementia? This discovery of the scientist takes you to uncover the mystery!

Gene therapy refers to a means of modifying genetic material (DNA or RNA) to achieve the purpose of treatment.

Compared with traditional drugs, gene therapy has the advantages of good targeting and more thorough treatment, and is considered to be a new type of treatment with broad prospects in the future.

At present, some gene therapies have been approved, and the treatment targets include genetic diseases, cancer, etc., while gene therapy for many other diseases is undergoing extensive clinical trials.

Recently, researchers at the University of Sheffield discovered a new approach to gene therapy, revealing an important regulatory mechanism that helps our genome stay healthy.  This approach can protect us from cancer, dementia and other life-threatening and life-shortening serious diseases.

Scientists recently discovered a new approach that can not only help humans prevent these two diseases to a large extent, but also provide enlightenment and new effective methods for how to treat cancer patients and dementia patients.

They published the results of this research in an article titled “USP11 controls R-loops by regulating senataxin proteostasis” in the journal Nature Communications: 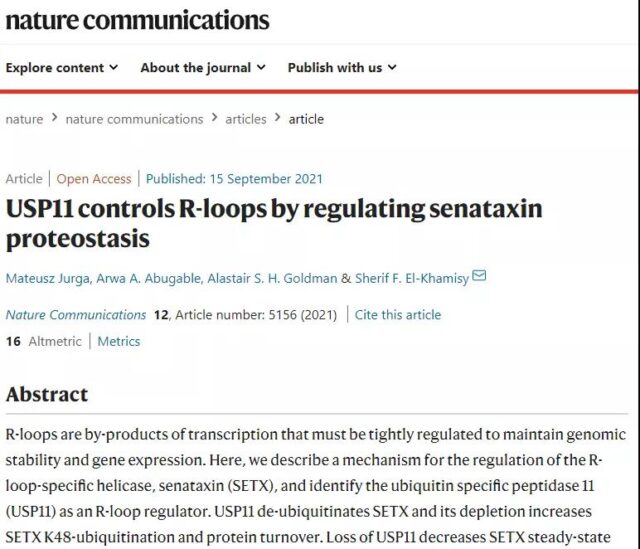 Scientists have discovered that when the cells in our body read DNA to build proteins, they often make mistakes. These mistakes can cause our genome to be destroyed and eventually bring us diseases such as cancer and dementia.

However, by studying how cells repair DNA damage in order to maintain our health, scientists have discovered the benefits of three proteins working together and working together.

By understanding how cells avoid making mistakes and thereby avoiding certain high-risk diseases in humans, scientists can modify the behavior of these proteins to ultimately achieve the goal of promoting people’s health.

This discovery can help scientists develop diagnostic testing methods and drugs that target one or more proteins for early detection and early treatment of certain types of cancer and neurological diseases; development of the ability to regulate one or more protein levels The new drug is expected to provide new treatments for cancer and dementia patients.

Professor Sherif El-Khamisy, co-founder and deputy director of the Institute of Healthy Life, University of Sheffield, and Professor Sherif El-Khamisy of the School of Biological Sciences and Institute of Neuroscience, University of Sheffield, said: “These findings are not only important for our research, they are important for future clinical trials. The significance of treatment is also particularly significant, because we are now in the stage of being able to develop drugs to control this microscopic change.

The drugs we develop will help kill cells, which is what we do when treating elderly cancer patients. Another use of these drugs is to reduce the extent of genome damage, thereby helping to alleviate diseases such as dementia. “