Bluebird Bio recently announced that the European Commission (EC) has approved Skysona (elivaldogene autotemcel, Lenti-D), which is a one-time gene therapy for the treatment of children under the age of 18, carrying ABCD1 gene mutations, There is no HLA-matched sibling hematopoietic stem cell (HSC) donor available, and patients with early cerebral adrenoleukodystrophy (CALD).

It is worth mentioning that Skysona is the first and only one-time gene therapy approved by the European Union for the treatment of CALD. CALD is a rare neurodegenerative disease that occurs in childhood and can quickly lead to progressive and irreversible neurological loss and death. In July 2018, EMA granted Skysona’s Priority Drug Qualification (PRIME) for the treatment of CALD, and previously granted Orphan Drug Qualification (ODD).

CALD is a devastating neurodegenerative disease. Previously, the only available treatment option for CALD patients was the transplantation of stem cells from donors, called allogeneic hematopoietic stem cell transplantation (allo-HSCT), which was associated with serious potential complications and mortality, when there was no matching sibling donor ( The risk is increased in CALD patients with matched sibling donor (MSD). It is estimated that more than 80% of patients diagnosed with CALD do not have MSD.

The approval of Skysona for listing marks a major milestone in CALD treatment. The treatment goal of the drug is to prevent disease progression in children with CALD without MSD to prevent further neurological decline and improve the survival rate of these young patients. Skysona uses the patient’s own hematopoietic stem cells. So far, there have been no reports of graft-versus-host disease (GVHD), graft failure or rejection, or transplant-related death (TRM) in clinical studies.

Bluebird Bio President Andrew Obenshain said: “Skysona is the first and only one-time gene therapy approved by the European Union for the treatment of CALD patients. The disease is a devastating neurodegenerative disease. We are very grateful to everyone who brought us here. People of this milestone. The mission of Bluebird Bio is to develop a therapy that recodes CALD at the genetic level. Today’s approval represents more than 20 years of research and development, which lays the foundation for future gene therapies. .”

Adrenal leukodystrophy (ALD) is a rare X-linked metabolic disorder that mainly affects men; worldwide, it is estimated that one in every 21,000 male newborns is diagnosed with ALD. This disease is caused by mutations in the ABCD1 gene, which affects the production of adrenal leukodystrophin (ALDP) and subsequently leads to the toxic accumulation of very long chain fatty acids (VLCFA), mainly in the adrenal glands and white matter of the brain and spinal cord. About 40% of boys with ALD will develop CALD, which is the most severe form of ALD.

CALD is a progressive and irreversible neurodegenerative disease that involves the destruction of myelin, which is the protective sheath of nerve cells in the brain responsible for thinking and muscle control. Symptoms of CALD usually occur in childhood (median age 7 years), with rapid and gradual decline in cognitive function and physical function. Early diagnosis of CALD is very important because the outcome of treatment varies with the clinical stage of the disease. Therefore, treatment must be performed before the disease progresses rapidly. Without treatment, nearly half of patients will die within 5 years from the onset of symptoms.

Skysona is a one-time gene therapy that uses Lenti-D lentiviral vector (LVV) for in vitro transduction and adds a functional copy of the ABCD1 gene to the patient’s own hematopoietic stem cells (HSC). The addition of the functional ABCD1 gene can produce ALD protein (ALDP) in the patient’s body, which is believed to help the decomposition of VLCFA. The expression of ALDP and the role of Skysona are expected to last for life. The purpose of Skysona treatment is to prevent the progression of CALD, thereby preserving nerve function as much as possible, including preserving motor function and communication skills. Importantly, with Skysona treatment, there is no need to obtain a donor HSC from another person.

Previously, the only available treatment option for CALD patients was the transplantation of stem cells from donors, called allogeneic hematopoietic stem cell transplantation (allo-HSCT), which was associated with serious potential complications and mortality, when there was no matching sibling donor ( MSD) patients are at increased risk. It is estimated that more than 80% of patients diagnosed with CALD do not have MSD. 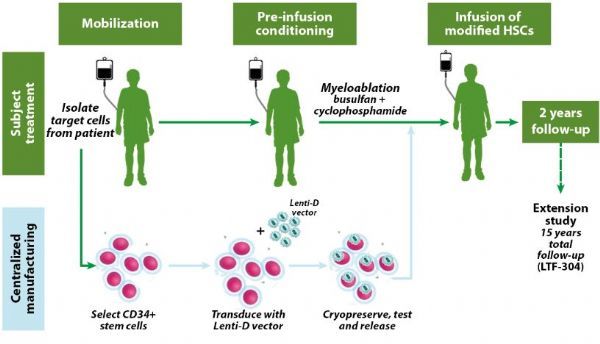 The European Union approved Skysona based on the efficacy and safety data of the Phase 2/3 Starbeam study (ALD-02). In addition, the Phase 3 ALD-104 study (N=19) is ongoing. All patients who have completed the ALD-102 study and those who will complete the ALD-104 study will be required to participate in the long-term follow-up study (LTF-304).

The primary efficacy endpoint of the key ALD-102 study is survival 2 years after treatment without any of the 6 major dysfunctions (MFD), not receiving the second allogeneic hematopoietic stem cell transplantation (allo-HSCT) or The proportion of patients who were given rescue cells and did not withdraw or lose follow-up within 2 years. Six MFDs are serious disabilities commonly found in CALD and are considered to have the most profound impact on the patient’s ability to live independently: loss of communication, cortical blindness, need for gastric feeding, general incontinence, wheelchair dependence, and complete loss of autonomous mobility.

As of October 2020, 32 patients have received Skysona treatment in the ALD-102 study, and 30 of them can be evaluated at the 24th month of follow-up. As of the data cutoff date, 90% (27/30) of patients reached the MFD-free survival endpoint at month 24. As mentioned earlier, two patients withdrew from the study based on the investigator’s judgment, and one patient experienced rapid disease progression early in the study, leading to multiple sclerosis and subsequent death.

Skysona showed a lasting effect on MFD-free survival. Most patients (26/27, 96.3%) who participated in the LTF-304 study were still alive and remained MFD-free at the last follow-up. The median follow-up time was 3.2 years (38.6 months; minimum: 13.4 months; maximum: 82.7 months). Fourteen patients were followed up for at least the fifth year. One patient who entered the LTF-304 study refused further follow-up.

In this study, the safety/tolerability of treatment options (including single cell mobilization/collection, conditioning, and Skysona infusion) mainly reflected the known effects of mobilization/apheresis and conditioning. The adverse reactions of Skysona observed in clinical trials include viral cystitis, pancytopenia and vomiting.

In clinical studies (ALD-102/LTF-304 and ALD-104) in 51 patients who received Skysona treatment, no graft-versus-host disease (GVHD), graft failure or rejection, and transplant-related death (TRM) were reported , Replication active lentivirus. Clonal expansion that led to clonality was found in patients treated with Skysona. Although there have been no reports of lentiviral vector-mediated insertion mutations causing tumors, including myeloproliferative disorders, leukemia or lymphoma associated with Skysona, there is still a theoretical risk of malignant tumors after Skysona treatment.