FDA removes the trial restrictions of Novartis Gene Therapy Zolgensma.  Novartis‘ gene therapy Zolgensma achieved US$634 million in the first half of the year, and its development into another “blockbuster” drug from Novartis is just around the corner.

As the FDA lifts part of the clinical shelving of Zolgensma spinal injection preparations, the market will be full of more expectations in the future, whether for Novartis or gene therapy, as well as the current hot gene-editing CRISPR therapy.

Spinal muscular atrophy (SMA) is a rare genetic disease that can cause progressive muscle weakness, paralysis, and even death. Without treatment, most children with severe SMA can only survive permanently on mechanical ventilation by the age of 2 or eventually die.

Just two weeks ago, on July 23, the multinational pharmaceutical giant Novartis announced the first half of 2021 financial report, with net sales of US$25.4 billion (+7%) in the first half of the year. Among them, the gene therapy Zolgensma achieved sales revenue of 634 million US dollars (+69%). Although it has not yet become Novartis’s core drug, it has a high probability of becoming Novartis’ future performance in terms of its strong growth momentum and the potential to cure certain diseases. The most powerful support. 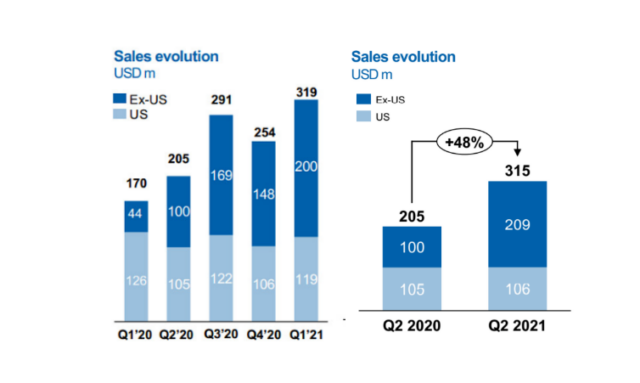 On August 3, Novartis announced that the FDA has lifted part of the clinical hold on Zolgensma spinal injection preparations and will restart the STEER clinical trial that was suspended in October 2019.

Since Novartis Zolgensma was approved by the FDA in May 2019, the progress has not been as smooth as expected. In addition to the controversy caused by the drug’s price of more than 2.1 million U.S. dollars, Novartis was suspected of concealing the gene therapy Zolgensma data manipulation scandal in July 2019 and not notified the FDA until Zolgensma was approved.

Especially in October 2019, the drug suffered another setback. The reason for the suspension was that a small preclinical animal study conducted at that time found that the monocytes of the animal’s dorsal root ganglion (DRG) were inflamed and sometimes accompanied by degeneration or loss of neuronal cells.

Since the safety of human test data cannot be fully guaranteed, the FDA requires Novartis to terminate Zolgensma’s trials in the United States. After nearly 2 years of trial and adjustment, the project has finally been restarted.

The restarted STEER clinical trial is a global, randomized, double-blind, sham-controlled phase 3 registration study, mainly for patients with late-onset SMA who still have a large number of unmet needs. The trial evaluated the clinical efficacy, safety and tolerability of OAV-101 intrathecal injection in patients aged 2-18 years who were able to sit down but had never walked. .

The STEER trial will be based on the Phase 1/2 STRONG study. The Phase 1/2 study showed that the intrathecal administration of OAV-101 resulted in a significant increase in the HFMSE score, which was almost equal to the baseline median score of 5.9. 2 times the clinical significance threshold, and the median follow-up time was 9.3 months. HFMSE is a widely used motor function scale in clinical or clinical trials to evaluate the physical ability and motor function of patients with SMA type 2 and 3 who cannot walk and can walk. The results of the study showed that the therapy produced a clinically significant response in the type 2 SMA patient population ≥2 years old and <5 years old.

In addition, STEER will add clinical data and new realistic evidence for the use of gene therapy to treat SMA. Since Novartis’s intravenous preparation Zolgensma was approved in May 2019, it has been approved in 41 countries and regions for the treatment of children with SMA under 2 years of age. More than 1,400 patients have been treated with Zolgensma IV worldwide, including in the European Union, South Korea and Canada. Regulatory approvals in these countries include dosage guidance for infants and young children under 21 kg.

In the United States, the drug is currently only allowed to treat children under 2 years of age. Novartis has always hoped that Zolgensma can extend its indications to children under 5 years of age and complete its marketing application in 2021. If the new intrathecal injection version is approved, it could more than double the number of patients available to Zolgensma, which, as Novartis CEO VasNarasimhan said, represents a “billion dollar” market.