Novartis recently announced that the U.S. Food and Drug Administration (FDA) has granted ligelizumab (QGE031) breakthrough drug designation for the treatment of patients with chronic spontaneous urticaria (CSU) who have insufficient response to H1 antihistamine therapy.

It is worth mentioning that ligelizumab is the first drug granted by the FDA to treat H1 antihistamine CSU patients with BTD. Currently, there are limited treatment options for CSU patients. BTD qualifications indicate that ligelizumab has the potential to provide substantial benefits over existing therapies.

BTD is a new drug review channel created by the FDA in 2012. It aims to accelerate the development and review for the treatment of serious or life-threatening diseases, and there is preliminary clinical evidence that the drug is in one or more New drugs that have significantly improved clinically significant endpoints. BTD-obtained drugs can receive closer guidance including high-level FDA officials during development, ensuring that new treatment options are provided to patients in the shortest time.

Angelika Jahreis, MD, Global Head of Development for Immunology, Liver Diseases and Dermatology of Novartis, said: “Chronic spontaneous urticaria is a debilitating disease that can have a significant impact on the lives of patients. Because the treatment options available are too numerous. Patients are looking for more and better treatments to control their diseases. FDA’s breakthrough drug qualification recognizes the need for more effective treatments for this unpredictable, systemic and debilitating disease .”

CSU is also known as chronic idiopathic urticaria (CIU), which is an unpredictable serious skin disease, which is typically manifested as urticaria (pruritus, painful wind mass) without specific external stimuli, Swelling (angioedema) or both. Due to its severity and unpredictability, CSU can be challenging or frustrating for patients. The disease usually lasts 1-5 years, but in some patients it lasts longer and can negatively affect the quality of life. The pathogenesis of CSU is not yet fully understood, but it is currently known that most patients are involved in autoimmune mechanisms.

At present, CSU is treated with second-generation antihistamine drugs. When high-dose antihistamine treatment fails, the anti-IgE monoclonal antibody Xolair (omalizumab) is usually added as the third-line therapy, even so many The patient still cannot fully control the symptoms.

Xolair is jointly developed and promoted by Novartis and Roche Genentech. This is a monoclonal antibody drug that targets IgE and is administered by subcutaneous injection. The drug was first approved in 2003 for the treatment of uncontrollable asthma. The patient was approved again in 2014 for chronic urticaria (CSU) refractory to H1 antihistamines. In the United States and Europe, Xolair has lost its patent protection, and Novartis is currently actively promoting the clinical development of ligelizumab. 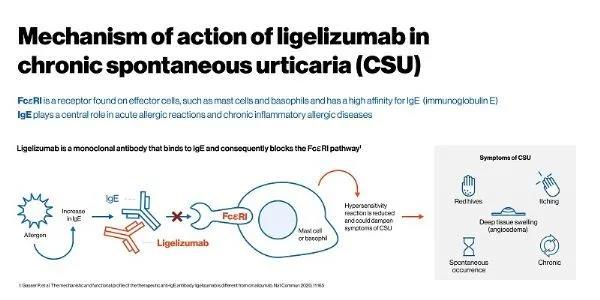 Mechanism of action of ligelizumab

Ligelizumab is a new generation of humanized anti-IgE monoclonal antibody that can block the IgE/FceR1 signaling pathway, which is a key driving factor in the inflammatory process of CSU. Ligelizumab has a higher affinity for IgE than Xolair and is currently in phase III clinical development for the treatment of CSU patients who cannot be treated with H1 antihistamines. The drug’s Phase III project includes two Phase III clinical studies (PEARL 1, PEARL 2), and more than 2,000 patients were recruited in 48 countries around the world.

Novartis expects to submit a marketing application for ligelizumab to the US FDA in 2022. As the successor to Xolair, if ligelizumab is successfully listed, it will help Novartis defend its franchise in the field of CSU treatment.