Gobal gene therapy products on the market.  According to Evaluate Pharma’s seller consensus forecast, from US$1 billion in 2017 to US$44 billion in 2024, the compound annual growth rate of the global market for cell therapy, gene therapy and nucleic acid therapy will reach an astonishing 65%.

With such a market value estimate, in the past few years, gene therapy has become and will continue to be one of the most concerned pharmaceutical fields by business development groups and industry observers. 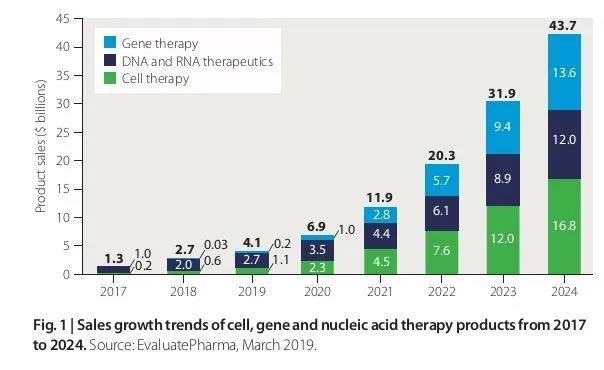 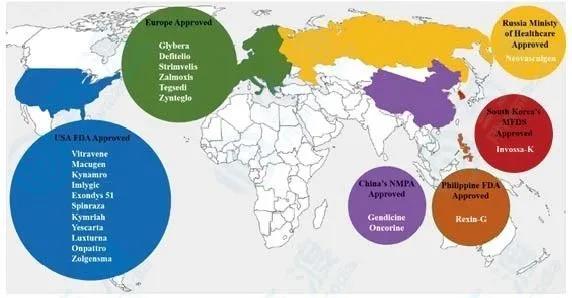 As shown in the figure, there are more than 20 gene therapy products on the market worldwide (two of them have been withdrawn from the market). The product types involve oligonucleotides, oncolytic viruses, CAR-T therapy, stem cell therapy and other cell-based Gene therapy.

These treatments use harmless viruses to bring good genes into cells, which insert them into the existing genome, thereby eliminating the effects of harmful mutations in another gene.

Gendicine: Recombinant human p53 adenovirus injection (Gendicine®/Jinyousheng®) is a recombinant replication-defective human type 5 adenovirus that carries the wild-type p53 gene developed by Shenzhen SiBiono. By expressing the tumor suppressor gene p53, it can stimulate the body to produce specific anti-tumor immune response, up-regulate multiple anti-oncogenes and down-regulate the activity of multiple oncogenes, thereby cascadingly enhance the tumor suppressor effect and specifically cause the programmed death of tumor cells, thereby To achieve the purpose of killing tumors [7]. The drug is an intratumor injection and was approved for marketing in China in 2003. It is mainly used to treat squamous cell carcinoma of the head and neck. It is the world’s first anti-tumor gene therapy product.

In the special issue of “Human Gene Therapy” in 2018, it recorded the first approved cancer gene therapy drug: Recombinant Human Adenovirus Injection (Gendicine), which is another 12-year clinical review.

In the 12 years from 2004 to 2016, Sibiono produced 41 batches totaling 169,571 Gendicine (1.0×1012 virus particles each). All medicines comply with the China Food and Drug Administration’s QC /QA standard. Based on an average of 5 medicines used by each patient, more than 30,000 patients, including nearly 10% of international patients from more than 50 countries, received Genagasei Gendicine’s single treatment or combined with radiotherapy, chemotherapy, hyperthermia, and other multiple treatments. A combination of various therapies.

On the whole, in various clinical applications and clinical studies, the use of Jinhuasheng treatment has achieved 30-40% complete response rate (complete response CR), 50-60% partial response rate (partial response PR), and total effective rate (CR + PR) reached 90-96%, which is consistent with the clinical data of Phase II and Phase III approved by CFDA. So far, the most common side effects in the treatment with Genagasei Gendicine are fever, joint pain and muscle pain after drug injection. About 50-60% of patients develop fever (37.5-39.50C) 24 hours after the injection of Jinsheng Gendicine, which lasts only a few hours.

The first gene therapy approved in the European Union for the treatment of lipoprotein lipase deficiency (LPLD), a rare genetic disease that can cause severe pancreatitis. The drug inserts the lipoprotein lipase gene into muscle cells. However, because LPLD occurs in a very small number of patients, the drug is not profitable. By 2017, its manufacturer refused to renew its sales authorization; Glybera was no longer on the market.

The drug has been approved in China, the United States and the European Union and can be used to treat melanoma in patients who have skin recurrence after the initial surgery. Imlygic is an improved gene therapy in which a viral vector is inserted directly into a tumor, where the gene replicates and produces a protein that stimulates the immune response to kill cancer cells.

Kymriah was developed for B-cell lymphoblastic leukemia (a cancer that affects white blood cells in children and young adults). Kymriah was approved by the FDA in 2017 and the European Union in 2018. It works by introducing new genes into patients’ own T cells so that they can find and kill cancer cells.

This drug was approved by the FDA in 2017 and approved by the European Union in 2018 for the treatment of patients with a rare form of hereditary blindness called biallelic RPE65 mutation-related retinal dystrophy. The disease affects 1,000 to 2,000 patients in the United States, and these patients have mutations in both copies of the specific gene RPE65. Luxturna delivers a normal copy of RPE65 to the patient’s retinal cells, enabling them to make the proteins needed to convert light into electrical signals and restore vision.

In Europe, about 15 patients are diagnosed with severe immunodeficiency every year, which is a rare genetic disease called adenosine deaminase deficiency (ADA-SCID). The body of these patients cannot produce the ADA enzyme, which is essential for healthy white blood cells. Strimvelis was approved in the European Union in 2016, and its working principle is to introduce the gene responsible for the production of ADA into stem cells extracted from the bone marrow of patients. These cells are then reintroduced into the patient’s blood, and then transported to the bone marrow, where they begin to produce normal white blood cells that can produce ADA.

Yescarta is specifically developed for the treatment of cancer called large B-cell lymphoma. It was approved by the FDA in 2017 and the European Union in 2018. It is currently undergoing clinical trials in China. Large B-cell lymphoma affects white blood cells called lymphocytes. The therapy is part of a method called CAR-T cell therapy, which uses viruses to insert genes encoding chimeric protein receptors (CARs) into the patient’s T cells. When these cells are reintroduced into the patient’s body, CAR enables them to attach and kill cancer cells in the blood.

In May 2019, the FDA approved Zolgensma for children under 2 years of age with spinal muscular atrophy, a neuromuscular disease that affects approximately 10,000 people worldwide. It is one of the main genetic causes of infant death. Zolgensma can deliver a healthy copy of the human SMN gene to the patient’s motor neurons in a single treatment.

Zynteglo was approved in the European Union in May 2019 to treat a blood disease called beta thalassemia, which reduces the patient’s ability to produce hemoglobin, a protein in iron-containing red blood cells that can be life-threatening Anemia. The therapy has been approved for individuals 12 years and older who require regular blood transfusions. It uses a virus to introduce healthy copies of genes into hemoglobin, allowing hemoglobin to enter the patient’s stem cells, and then reintroduce these cells into the blood and transport them to the bone marrow, where they begin to produce healthy red blood cells that can make hemoglobin.

This method uses synthetic strands of RNA or DNA (called oligonucleotides), which can be attached to specific genes or their messenger molecules after they are introduced into the patient’s cells, effectively inactivating them. Some treatments use an antisense method named after a strand of DNA, while others rely on small interfering RNA strands, which block the instruction molecule from the gene to the cell’s protein factory.

This medicine contains a mixture of single-stranded oligonucleotides obtained from pig intestinal mucosa. It has been approved (with restrictions) in the United States and the European Union in 2017 for the treatment of severe venous occlusive disease in patients undergoing bone marrow transplantation. Venous occlusive disease is a disease that causes obstruction of small hepatic veins.

Due to some controversies about its efficacy, the FDA approved Exondys 51 in 2016. Two members of the FDA review team resigned to protest the decision. The therapy aims to treat Duchenne muscular dystrophy caused by RNA mutations, which encode proteins that help connect the cytoskeleton of muscle fibers to the surrounding matrix. Exondys 51 can effectively treat about 13% of the Duchenne population.

Age-related macular degeneration is the main cause of vision loss in people 60 years and older. This is due to the deterioration of the center of the retina due to blood vessel leakage. Macugen has been approved in the United States to treat the disease by inhibiting the growth of these blood vessels under the retina.

After receiving FDA approval in 2016, Spinraza became the first gene-based spinal muscle atrophy therapy. Hereditary diseases are caused by low levels of SMN, which is a key protein for maintaining motor neurons. Spinraza binds to RNA from a “spare” gene called SMN2 and converts that RNA into instructions for making a fully functional SMN protein.