Eating more than an egg daily will increases the risk of death?

Eggs are a good source of high-quality protein, vitamins and other biologically active nutrients (such as lecithin and carotenoids) and are recommended as part of a healthy diet in the 2015-2020 American Dietary Guidelines.

However, due to the high cholesterol content of eggs (approximately 186mg cholesterol per egg), in the past few decades, it has been recommended to limit the intake of cholesterol in the diet to 300mg/day to prevent cardiovascular disease. Therefore, many people choose not to eat eggs (each egg is about 50g) or egg yolk, but some people say that it is okay to eat a few more eggs.

Although in recent years there have been many studies on the fact that eating eggs can increase cholesterol levels in the body and increase the risk of cardiovascular disease, there are few data from large-scale cohort studies.

Today we are going to introduce this NIH-AARP Diet and Health Study published in PLOS MEDICINE, which assesses the association between egg and dietary cholesterol intake and all-cause mortality and cardiovascular disease mortality.

Next, let us look at this research together.

The NIH-AARP study is a large-scale prospective study, from 1995 to 1996 from six US states (California, Florida, Louisiana, New Jersey, North Carolina and Pennsylvania) and two other large Urban areas (Atlanta, Georgia and Detroit, Michigan) recruited 521,120 participants (mean age 62.2 years, 41.2% women) and were followed up to the end of 2011.

The study assessed the intake of whole eggs, protein/substitutes and cholesterol through a validated food frequency questionnaire, and stratified energy intake according to quintiles. 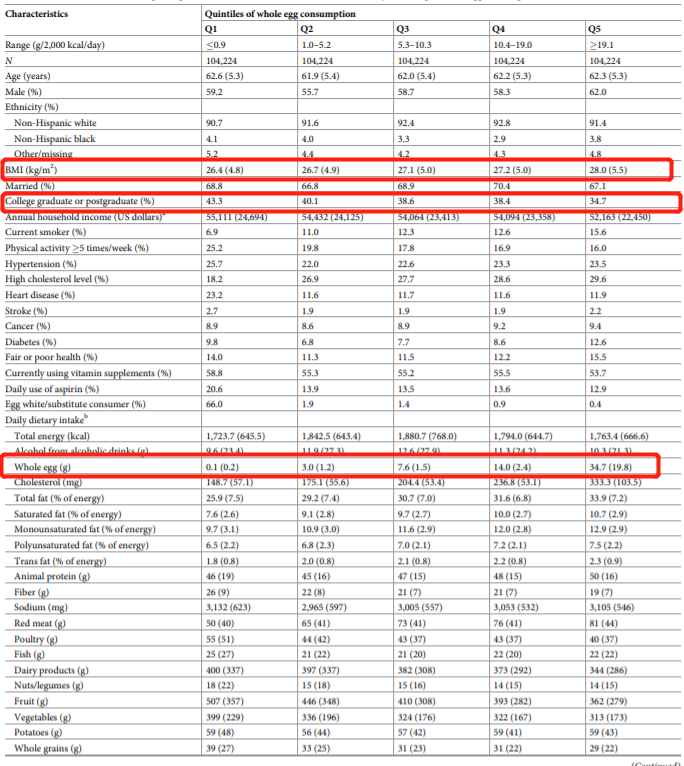 Not only that, they are also less educated, less physically active, more likely to smoke, higher cholesterol levels, and higher intake of red meat; intake of fruits, dairy products, and sugar-sweetened beverages The amount is even less.

Research data shows that during an average follow-up of 16 years, a total of 129,328 deaths occurred. In the age- and gender-adjusted model, eating whole eggs was closely related to higher all-cause mortality (model 1, P<0.001).

After further adjusting other demographic characteristics and dietary factors (P<0.001), the positive correlation between eating whole eggs and higher all-cause mortality is still significant. However, after further adjusting the cholesterol factor (P=0.64), the positive correlation between the consumption of whole eggs and the risk of death from all causes was not significant.

From this point of view, whole eggs will lead to an increase in all-cause mortality, which does have a certain relationship with cholesterol. In contrast to eating whole eggs, in the multivariate adjusted model, the consumption of egg white/egg substitutes was significantly associated with lower all-cause mortality (P<0.001). 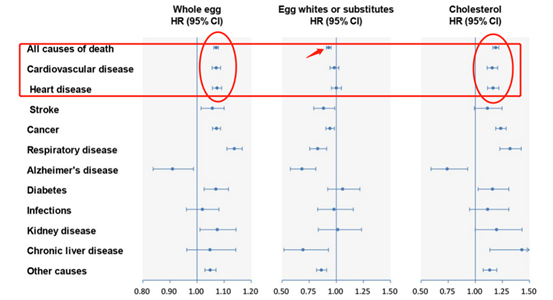 Let’s take a look at Figure 1. Figure 1 shows that for every additional half an egg/day, egg white/substitute/day, or every additional 300 mg cholesterol/day, the mortality changes due to different causes such as cardiovascular disease.

That said, eating less eggs and cholesterol, and increasing your intake of egg whites or egg substitutes is beneficial.

Table 2: Data source of Figure 1. According to changes in the intake of eggs and cholesterol, all-cause deaths and other deaths.

After reading all-cause mortality, let’s talk about the risk of death from cardiovascular disease. 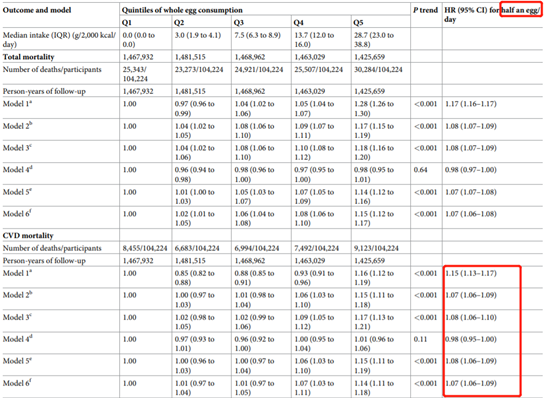 Note: The multivariate models in the text are:

Table 4: The relationship between intake of 300mg/2000kcal/day cholesterol and cardiovascular disease mortality 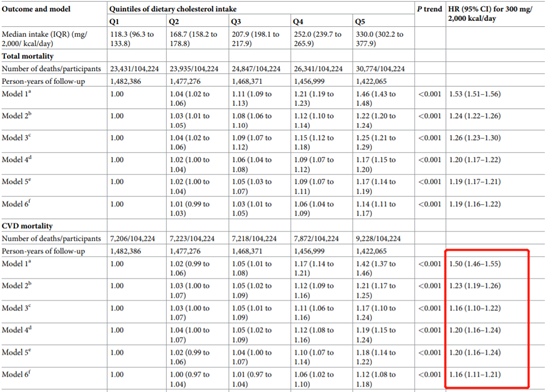 After multivariate adjustment, the intake of whole eggs and cholesterol was positively correlated with CVD mortality (P trend <0.001), while the correlation between intake of egg white/egg substitutes and cardiovascular death did not seem to be significant (P= 0.40). So it seems that egg whites and egg substitutes dominate.

Returning to Figure 1, you can see that eating half an egg a day with one egg a day can increase the risk of CVD death by 7%.

Table 5: Data source of Figure 1. According to changes in the intake of eggs and cholesterol, all-cause deaths and other deaths.

Replacing half an egg every day can reduce the risk of all-cause and cardiovascular death!

In the hypothetical substitution analysis, the researchers found that replacing half a whole egg (25 g/day) with equal amounts of egg white/egg substitutes, poultry, fish, dairy products, nuts, and beans can reduce 6% and 8%. %, 9%, 7%, 13%, and 10% all-cause mortality (Figure 2).

Figure 2: By substituting the same amount of other protein sources for a whole egg, adjust: the multivariable risk ratio of all-cause and cardiovascular death

When half an egg was replaced with the same amount of poultry, fish or dairy products, the CVD mortality rate also changed significantly.

Intake of protein can be a different way, don’t eat more eggs!

For this finding, the researchers concluded: In this large cohort, the intake of whole eggs and cholesterol was associated with higher all-cause and cardiovascular disease mortality, while the intake of egg white/egg substitutes was associated with lower Related to death rates. The all-cause of eating whole eggs, the increase in CVD mortality is largely affected by cholesterol intake.

According to the researcher, this study is currently the largest cohort study on the topic of “eggs, cholesterol and the risk of death from disease”. The researcher has a follow-up rate of ≥99% during the 16-year follow-up period. But the researchers also pointed out that the results of this study may not be generalized to people outside the United States due to different nutrition and diet patterns and different prevalence of chronic diseases.

Therefore, due to the observational nature of the study, it is impossible to explain the relationship between egg intake and the risk of death by causation.

So, how many eggs do you usually eat every day? After reading the research, would you consider trying other protein sources to replace part of your egg intake?