One more egg daily will increase cardiovascular disease and cancer death.   Nutrients that the human body needs every day include protein, an important nutrient. Eggs are a good source of high-quality protein, vitamins and other bioactive nutrients (such as lecithin and carotenoids). However, in recent years, meta-analysis and observational studies on egg consumption and health have shown inconsistent results.

Some studies claim that eating eggs is beneficial to health, including reducing the risk of diabetes and cardiovascular disease; while other studies warn that eating more than one whole egg a day will increase the risk of heart disease due to excessive intake of cholesterol in the egg yolk. risk.

In the past few decades, the initial dietary guidelines recommended to limit dietary cholesterol intake to 300 mg per day to prevent cardiovascular disease. However, due to insufficient evidence (lack of large-scale studies) in current studies, officials have not further determined the upper limit of dietary cholesterol. In addition, cholesterol often coexists with saturated fat and animal protein in foods, and its independent role and its interaction with these nutrients on overall health remains to be determined.

In a new study published in “PLOS Medicine” on February 10, a research team led by Professor Zhang Yu and Professor Jiao Jingjing from the School of Biosystem Engineering and Food Science of Zhejiang University passed a large-scale survey of more than 520,000 participants. The cohort study found that the intake of eggs and cholesterol was associated with higher cardiovascular disease, cancer and all-cause mortality.

Moreover, the increase in mortality associated with eating eggs is largely affected by cholesterol intake. The results of the study recommend limiting cholesterol intake and replacing whole eggs with egg whites/alternatives or other alternative protein sources to promote cardiovascular health and healthy life.

In this study, the researchers used data from 521,120 participants (aged between 50 and 71 years old, 41.2% women) from the NIH-AARP Diet and Health Study in the United States to assess the relationship between egg and cholesterol intake The association between all-cause and specific cause mortality.

During an average follow-up of 16 years, 129,328 deaths occurred in the cohort. According to the food questionnaire report, after adjusting for demographic characteristics and dietary factors, the researchers found that whole egg intake was significantly correlated with all-cause mortality. Moreover, after further adjusting cholesterol intake, whole egg intake The amount is still significantly related to all-cause mortality. 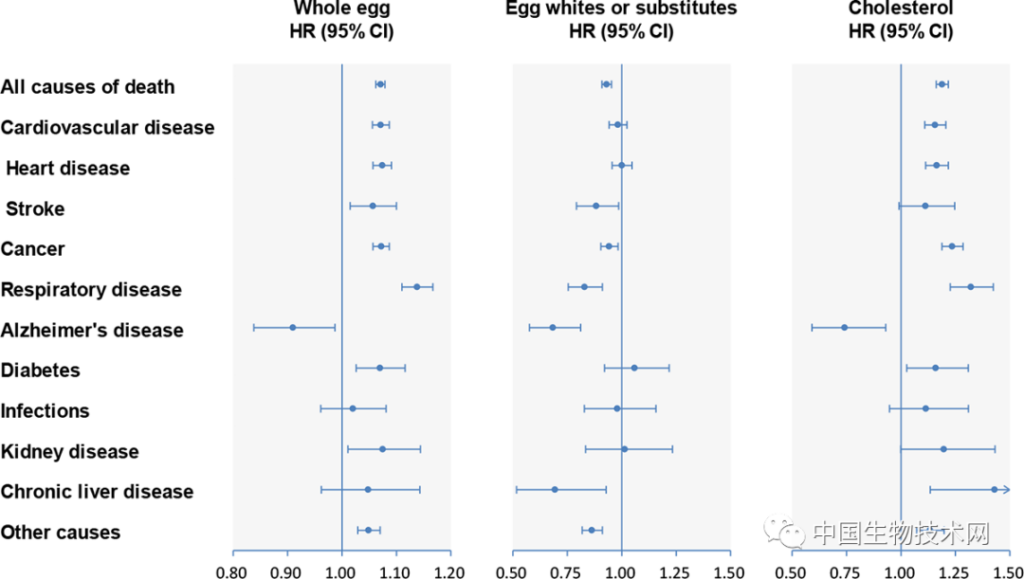 Specifically, the daily intake of 300 mg of dietary cholesterol (an egg contains 186 mg of cholesterol on average) increased the likelihood of premature death by 19%; the risk of death from cardiovascular disease and cancer increased by 16% and 24%, respectively . An extra half egg intake per day is associated with a 7% increase in all-cause mortality.

Although eating more eggs may be harmful to your health, the study found that egg whites or egg substitutes (nuts and beans) can significantly reduce mortality: for those who eat only egg whites, cardiovascular disease, cancer, and respiratory diseases The mortality rate dropped by 3%, 8% and 20% respectively.

The researchers said that after taking into account other dietary factors such as age, gender, and education (regardless of whether the participants ate fried eggs, boiled eggs, or baked eggs), the results of the study remained stable.

Although many countries including the United States have included eggs in their national dietary guidelines, researchers said that people should avoid eating egg yolk as much as possible because this is the source of most harmful cholesterol.

Why eating more eggs may be harmful to health?

Cholesterol in the egg yolk will accumulate in the arteries to form thrombi, leading to atherosclerosis, thereby increasing the risk of cardiovascular disease. Moreover, many studies have shown that after eating eggs and meat products, Firmicutes in the intestinal bacteria can convert the nutrient choline in eggs and carnitine in meat into TMAO (trimethylamine oxide) Toxic compounds and release this metabolite into the blood.

An individual’s gut microbiome affects the level of circulating TMAO in the body, and TMAO plays an important role in the progression of cardiovascular disease and colon cancer. Recent studies have shown that TMAO can also promote the growth of intestinal, bladder, prostate, breast and ovarian tumors. It also makes the digestive tract particularly vulnerable.

In addition, many studies have revealed the link between plant-based diets and reduced risk of heart disease. A vegetarian diet was found to be more effective in preventing heart disease than a diet with small amounts of fish, lean meat, and eggs recommended by the American Heart Association.