The new version of PROTAC technology successfully degrades PD-L1.  PROTACs and related targeted degradation technologies (such as LYTACs, dTAGs, Trim-Away, and SNIPERs) have become a new type of treatment that targets proteins that have traditionally been considered untraceable. 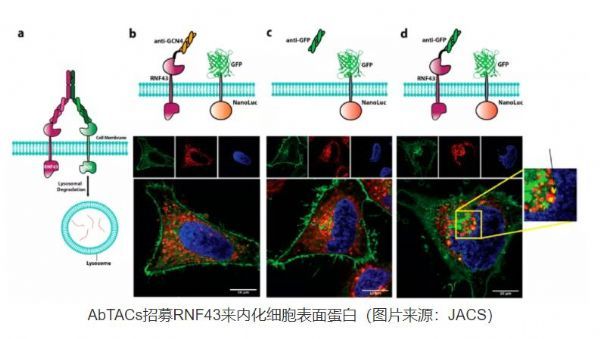 One of the biggest advantages of PROTACs technology is the ability to change the target from “drugless” to “drugged”. Traditional small molecule inhibitors need to have strong binding to the target protein, usually to the active site. However, it is estimated that 80% of the proteins in human cells lack such sites. Since PROTACs only need to weakly bind to the target protein to specifically “label” it, ~80% of the non-druggable proteins in the proteome may be able to be solved by PROTACs technology. In addition, PROTACs also have the potential to solve the resistance of traditional small molecule inhibitors, because protein degradation agents developed based on PROTACs technology may be able to catalyze the degradation of a variety of mutant proteins, thereby overcoming or reducing resistance to a certain extent.

Although based on these advantages, PROTACs have great prospects, but this technology also has some limitations that need to be overcome. Because the ubiquitin-mediated degradation pathway occurs in cells, small molecule PROTACs currently mainly attack intracellular targets, which makes many membrane proteins (accounting for ~23% of the encoded proteins) unable to be targeted by PROTACs technology. The protein does not have a suitable binding pocket in the intracellular segment for the binding of small molecule ligands. Therefore, a new strategy to degrade cell surface proteins may be able to revolutionize the field of targeted protein degradation.

Recently, in a study published in the Journal of the American Chemical Society, a team of scientists from the University of California, San Francisco proposed that antibody-based PROTACs (antibody-based PROTACs, AbTACs) may be a direction worth exploring. Their study reported a fully recombinant bispecific antibody that can recruit membrane-bound E3 ligase to degrade cell surface proteins. Studies have shown that AbTACs can degrade PD-L1 by recruiting membrane-bound E3 ligase RNF43.

RNF43 is a transmembrane E3 ligase, which includes an extracellular domain with a specific structure and an intracellular RING domain. RNF43 can cause its endocytosis and degradation by ubiquitinating Wnt co-receptor Frizzled, and then negatively regulate the Wnt signaling pathway (previously developed small molecule PROTACs all use cytoplasmic E3 ligase, this study expands the transmembrane E3 ligase Application in targeted degradation).

In the study, the scientists chose PD-L1 as the initial degradation target. PD-L1 is a protein that is overexpressed in many cancers. It binds to the inhibitory receptor PD-1 on T cells and leads to inhibition of T cell responses. PD-L1 has a small 31 amino acid long cytoplasmic domain, but there is no known small molecule ligand that can bind to this domain. This allows the use of traditional small molecule PROTACs to target PD- L1 is challenging.

In order to construct PD-L1 targeting AbTACs, the PD-L1 antibody atezolizumab (atezolizumab), which has been approved for marketing, was used as the PD-L1 binder, and then combined with RNF43 (binder) Fusion produces the recombinant bispecific antibody AC-1. The BLI test confirmed that AC-1 can bind PD-L1 and RNF43 at the same time.

Next, the researchers tried to test whether AC-1 can degrade PD-L1 on cells. Due to the high expression of PD-L1, they first chose the triple-negative breast cancer cell line MDA-MB-231. Flow cytometry confirmed the presence of RNF43 in MDA-MB-231. Studies have shown that treatment of MDA-MB-231 cells with 10 nM AC-1 can induce a large amount of degradation of both forms of PD-L1 within 12 hours, and the degradation reaches the highest level at 24 hours (Dmax=63%).

The results show that bafilomycin can reduce the degradation of PD-L1, but MG-132 cannot. These data indicate that AC-1 induces PD-L1 degradation in a RNF43 and lysosome-dependent manner.

LYTACs consist of an oligoglycopeptide group, an antibody and a linker. The oligosaccharide peptide group can bind to a cell surface receptor called CI-M6PR (a lysosomal targeting receptor), and the antibody can bind to a specific transmembrane or extracellular protein. When LYTAC binds to CI-M6PR and target protein at the same time, the resulting CI-M6PR-LYTAC-target protein complex will be “engulfed” by the cell membrane to form a transport vesicle.

The vesicles transport the complex to the lysosome (an organelle containing protein degrading enzymes), after which the target protein is degraded and the receptor enters the cycle for reuse. This important discovery was published in Nature in July last year. In this study, scientists also successfully used LYTACs to degrade PD-L1. Scientists believe that LYTACs, as an effective tool that can expand the range of degradable proteins, have very promising prospects.