The treatment strategy based on peginterferon alpha is the best choice for the clinical cure of chronic hepatitis B. Interferon has a dual mechanism of direct anti-virus and immune regulation, but the mechanism of interferon degradation of cccDNA has not been thoroughly studied.

Last year, there were a number of research publications exploring the mechanism of interferon inhibiting cccDNA, including the inhibition of cccDNA by changing epigenetic methods such as histone modification and miRNA carried by exosomes secreted by macrophages (related link one two Three).

Recently, German researchers published a new study in EMBO reports (IF = 7.497), showing that interferon-stimulating protein 20 (ISG20) is essential for the degradation of HBV cccDNA, but ISG20 is not expressed in patients with chronic hepatitis B, so interferon treatment It can increase the expression of ISG20, and its synergistic effect with APOBEC3A can effectively degrade HBV cccDNA.

The persistence of HBV is mainly due to the presence of cccDNA in the nucleus of infected cells, but there are no drugs that directly target cccDNA. Interferon can reduce HBV cccDNA through APOBEC3A-mediated deamination.

However, the study found that overexpression of APOBEC3A alone was not enough to reduce HBV cccDNA, and interferon was needed for additional treatment of cells, which indicated that the interferon-stimulating gene ISG was involved in the degradation of cccDNA.

Transcriptome analysis identified that ISG20 is the only type I and type II interferon-induced nuclear protein with nuclease activity. ISG20 is located in the nucleolus of interferon-stimulated hepatocytes and is enriched on single-stranded DNA containing deoxyuridine, which can mimic the transcriptionally active APOBEC3A deaminated HBV DNA. The expression of ISG20 can be detected in acute, self-limiting hepatitis B, but not in chronic hepatitis B. 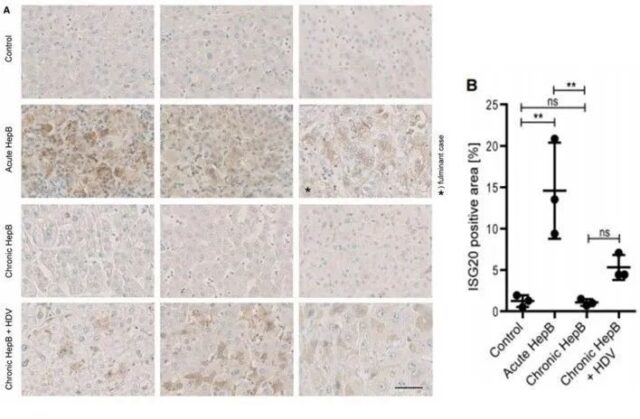 ISG20 is expressed in acute self-limited HBV infection, but not in chronic hepatitis B

The depletion of ISG20 can reduce the clearance of cccDNA induced by interferon, and the co-expression of ISG20 and APOBEC3A is sufficient to reduce cccDNA. Therefore, the decrease of non-cytolytic HBV cccDNA requires the synergistic action of deaminase and nuclease. 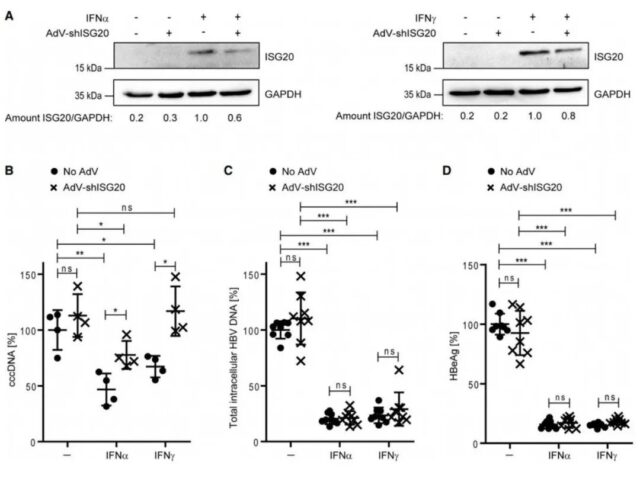 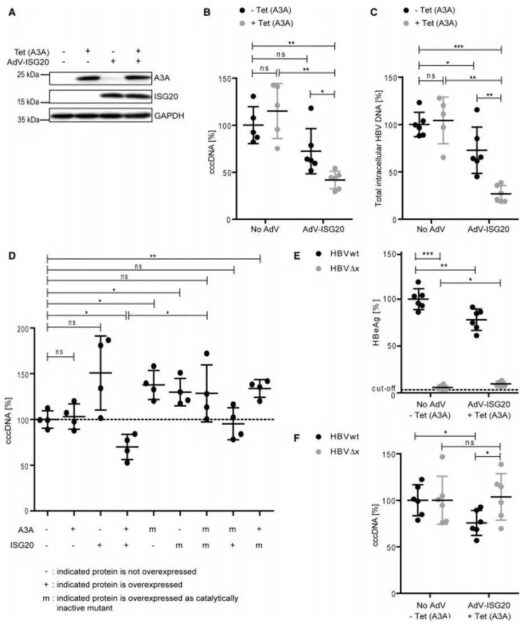 The findings of this study indicate that ISG may have a synergistic effect in antiviral activity, which may be used in the exploration of therapeutic targets.