Angiotensin-converting enzyme II (ACE2) has attracted much attention as a receptor for the new coronavirus (SARS-CoV-2) to enter the host cell. The entry of SARS-CoV-2 into the host cell depends on the extracellular domain of ACE2 being cleaved by the TMPRSS2 protease and trans Membrane domain and internalization of the virus [1].

Recently, a number of single-cell RNA sequencing results have shown that ACE2 is expressed in a variety of tissues, and the expression level is relatively high in the airway nasal epithelium (the globules and ciliated cells of the nasal cavity epithelial cells), in the bronchial and alveolar regions This expression pattern is consistent with SARS-CoV-2 infection levels in patients with different airway intervals [2]. It is also consistent that nasal swabs from COVID-19 patients have a relatively higher viral load than throat swabs [3].

In human nasal epithelium and lung tissue, the expression of ACE2 has been reported to be regulated by interferon (IFN), and there is also evidence that there are binding sites for STAT1, STAT3, IRF8 and IRF1 in the ACE2 promoter, which activates the downstream genes of IFN It is an important way of human antiviral defense [4]. Therefore, although ACE2 plays a key role in SARS-CoV-2 infection, the understanding of ACE2 expression (including response to viral infection) is still unclear.

On January 11, 2021, the teams of Vito Mennella, Gabrielle Wheway, Jane S. Lucas and Donna E. Davies from the University of Southampton published an online titled “A novel ACE2 isoform is expressed in human respiratory epithelia and is upregulated” on Nature Genetics. In response to interferons and RNA respiratory virus infection” research paper identified a new ACE2 spliceo-short ACE2, which is expressed in human nasal cavity and bronchial respiratory epithelium (the main site of SARS-CoV-2 infection). Compared with full length ACE2 (long ACE2), short ACE2 is preferentially expressed in bronchial epithelium. Importantly, in primary airway cells, short ACE2 (rather than long ACE2) is upregulated in response to IFN and rhinovirus infection. 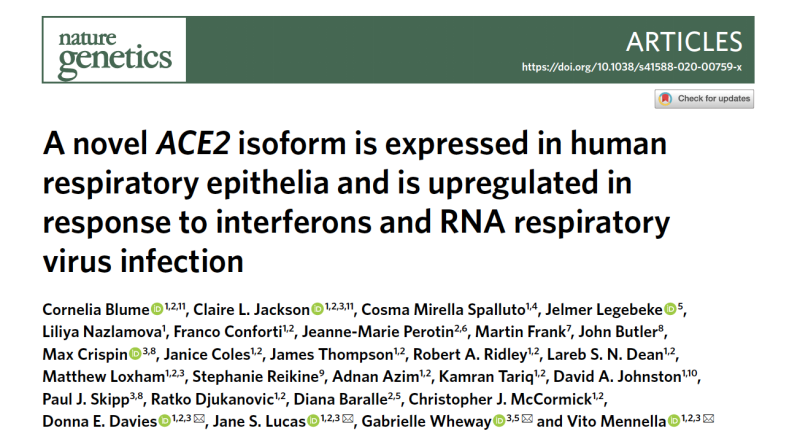 The researchers first analyzed the transcript expression of ACE2 in the airway epithelium using RNA-seq data from nasal epithelial air-liquid interface cultures, and visualized the comparison of ACE2 gene regions. Multiple sets of data were mapped to GENCODE v.33. The genomic region between exons 9 and 10 constructed by the ACE2 gene has a discrete 3’junction at GRCh38 chrX:15580281, indicating that there is a splicing region with downstream exon 10.

The variable 5′-length indicates that there is no splicing upstream of exon 8, indicating that there is a new ACE2 transcript in the airway starting from a new exon, which the researchers call exon 9a. After further assembly and analysis, a new spliceosome of ACE2, short ACE2, was identified, which is independent of the transcriptional regulation of full-length ACE2 (long ACE2) (may be regulated by IFN, AP-1 and NF-κB), and is found in primary nasal epithelial cells The expression level of the transcript is higher.

In particular, the expression levels of long ACE2 and short ACE2 in primary bronchial cells in vitro or in vivo are also high, and the expression levels are affected by the degree of differentiation of epithelial cells. The researchers also modeled and found that compared with the long ACE2, the short ACE2 lacks many SARS-CoV-2 binding regions, indicating that its structural stability may also be different from the long ACE2.

Furthermore, researchers used Western Blot to detect the expression of proteins encoded by short ACE2 in a variety of cell types. Antibodies to the C-terminal domain (CTD) and extracellular domain (ECTO) can recognize the common epitope of long ACE2 and short ACE2. In addition to the long ACE2 expression detected at 100 kDa in the cell line, the short ACE2 expression was also detected at about 52 kDa, which is consistent with the prediction. N-terminal domain (NTD) antibodies can only recognize long ACE2; immunofluorescence staining results show that long ACE2 and short ACE2 are mainly located in the motile cilia and the cell top area, respectively.

In summary, this study found a new ACE2 spliceosome—short ACE2 (52 kDa), which is mainly expressed in airway epithelial cells, the main infection site of SARS-CoV-2. Due to its lack of signal peptide, the structure may be relatively unstable. Importantly, short ACE2 (rather than long ACE2) is mainly regulated and induced by IFN during rhinovirus infection. However, under conditions such as SARS-CoV-2 infection or IFN-β deficiency (such as asthma) and other conditions where IFN is inhibited, the degree of induction of short ACE2 decreases. In general, short ACE2 may be innate in the airway resistance. Virus plays an important role in the defense mechanism, and its specific functional mechanism needs follow-up exploration.

It is worth noting that Nature Genetics previously published back-to-back research papers by the National Cancer Institute and Imperial College of the National Institutes of Health [5,6]. These two studies are similar to this study and also found short ACE2 spliceosomes. In addition, the former found that short ACE2 was only expressed in primates, and in the cancer genome map, it was specifically enriched in squamous tumors of the respiratory tract, gastrointestinal tract, and urogenital tract; the latter also found that short ACE2 was mainly expressed In the airway and gastrointestinal tract, and can not enhance SARS-CoV-2 infection. These three studies jointly explained the existence of a new ACE2 spliceosome—short ACE2.