Virus-specific T cell adaptive immunity is the key to the elimination of HIV-infected cells, and it is essential for any strategic approach to cure HIV infection.

The persistence and persistence of this latent virus pool rule out the possibility of eradicating HIV by cART therapy alone.

Achieving a cure or sustained remission of HIV without cART treatment will require an enhanced and sustained effective antiviral immune response. Chimeric Antigen Receptor (CAR) T Cells (CAR-T) have become a powerful immunotherapy and show promise for the treatment of HIV infection.

In many such methods based on peripheral blood T cell modification, the persistence, tissue delivery, and functional maintenance of modified T cells remain a major challenge.

In previous studies and clinical trials, a bad feature of the first-generation CD4CAR (CAR constructed based on full-length CD4) is that the CD4 receptor itself can mediate HIV infection. The CD4 molecule contains 4 extracellular domains, named D1, D2, D3, and D4 in turn.

The D1 domain is the furthest away from the transmembrane domain and contains the HIV envelope binding region. HLA class II binding sites are mainly found in the D1 and D2 domains.

The D4 domain mediates IL-16 binding and CD4-CD4 dimerization. IL-16 is an immunomodulatory cytokine, which acts as a chemokine for CD4 cells mainly at sites of inflammation.

In the first generation of CD4CAR, the binding of IL-16 on the D4 domain can lead to potentially non-specific CD4CAR signal transduction based on IL-16.

For this reason, it is necessary to develop a CAR that does not cross-react with IL-16 and reduces the interaction between HLA II and endogenous TCR, thereby potentially increasing the safety of CAR.

In order to overcome these problems, researchers from the University of California, Los Angeles, in a new study, developed and tested a second-generation CD4-based CAR (hereinafter referred to as D1D2CAR) against HIV infection using a method based on hematopoietic stem cells (HSC). .

In the second generation of CD4CAR, they eliminated the D3 and D4 domains of CD4, leaving only the D1 and D2 domains that allow HIV envelope recognition, thus creating a truncated CD4CAR molecule, namely D1D2CAR. The relevant research results were published in the journal PLoS Pathogens on April 2, 2021. The title of the paper is “Robust CAR-T memory formation and function via hematopoietic stem cell delivery”.

In in vitro experiments, these authors found that expression of the first-generation CD4CAR resulted in successful HIV infection of host cells. On the contrary, expression of D1D2CAR did not allow host cells to be infected by HIV. This indicates that although it can bind to the HIV envelope, D1D2CAR does not allow the virus to invade host cells.

More importantly, T cells expressing the first generation of CD4CAR (hereinafter referred to as CD4CAR-T) and T cells expressing D1D2CAR (hereinafter referred to as D1D2CAR-T) showed considerable cell-killing activity against HIV-infected cells. This indicates that D1D2CAR is functionally capable of inducing an antiviral response similar to the first-generation CD4CAR. 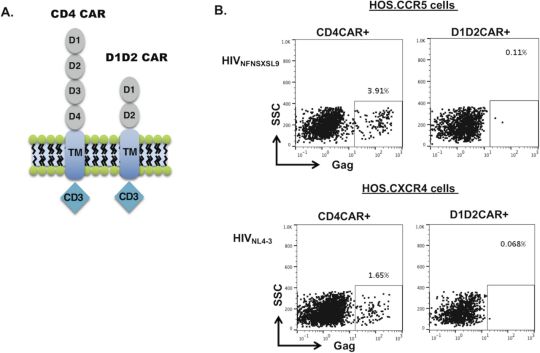 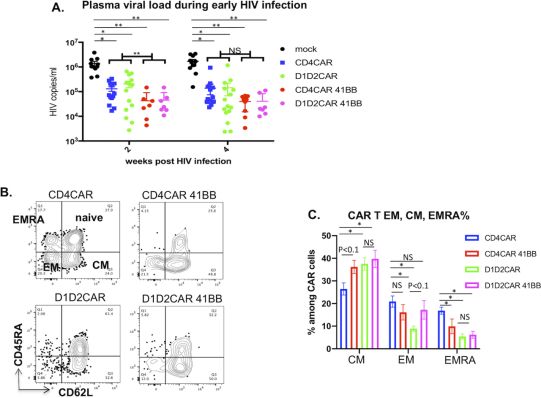 Previous studies have shown that adding a costimulatory domain to CAR may promote faster primary response of CAR-positive cells, but the effect of this addition on the colonization of hematopoietic stem cells and the production of thymic lymphocytes is unknown.

It was found that the 4-1BB costimulatory domain instead of the CD28 costimulatory domain allowed successful hematopoietic differentiation and improved differentiation from hematopoietic stem cells Antiviral function of CAR-T cells. Adding 4-1BB can lead to more rapid suppression of viremia. The combined use of D1D2CAR 4-1BB and cART can cause these mice to achieve viral suppression faster, and CAR-T cells are more persistent during ART treatment.

These results indicate that D1D2CAR-41BB is a CAR with excellent performance, showing better hematopoietic stem cell differentiation, virus suppression, CAR-T cell persistence, and fewer harmful functions than the first-generation CD4CAR. It should continue to be used for clinical research. Candidate drugs.