What are the characteristics of the fourth-generation CAR-T cells?

What are the characteristics of the fourth-generation CAR-T cells?  CAR-T cell therapy has triggered a revolution in the treatment of patients with relapsed/refractory (R/R) B cell hematological malignancies [1-3].

But within the first year after CAR-T cell therapy, the recurrence rate is still high. In the long-term follow-up of 101 patients with R/R diffuse large B-cell lymphoma (DLBCL) who received tisagenlecleucel, 61 patients progressed or died during the study. The median progression-free survival time was only 5.9 months.

In general, the main limitations of CAR-T cells are the limited available target antigens, fragility in the tumor microenvironment (TME), lack of tumor killing ability and low persistence. In addition, the time-consuming and expensive nature of the treatment presents challenges.

The structure of CAR-T cells must be reconsidered, including extracellular domain, transmembrane domain, and internal domain, as well as manufacturing technology and T cell sources to improve the clinical effects of CAR-T cells, including enhanced efficiency, persistence, infiltration and resistance. Apoptosis ability (Figure 1) [8-10].

The design of the fourth and next generation CAR-T cells is based on this re-evaluation: These cells may provide anti-tumor efficacy by solving the problem of TME and immune system reconstitution, based on mechanisms other than T cell cytotoxicity [11]. 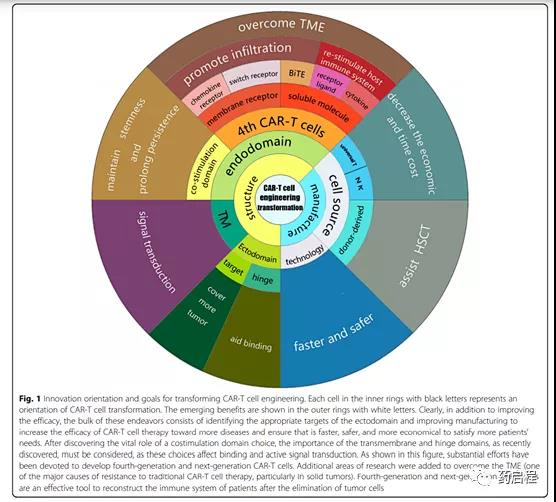 Fourth and next generation CAR-T cells 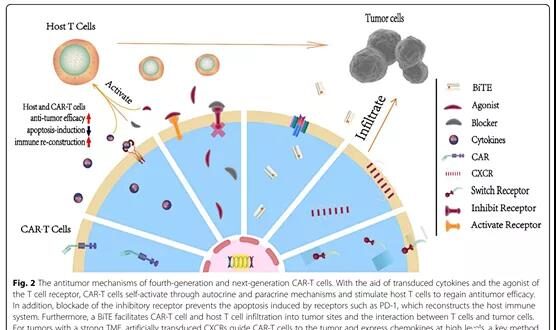 TME reduces the anti-tumor and proliferative activities of CAR-T cells. During the manufacturing process, the sequence encoding the secreted peptide is transfected into T cells to increase the resistance of CAR-T cells to TME induction and activate the immune system.

When these CAR-T cells are activated, the sequence is transcribed and the immunomodulator is secreted into the extracellular fluid, where it not only continuously stimulates CAR-T cells to maintain activity but also induces the formation of T memory cells to reactivate the host immune system In response to re-stimulation.

Theoretically, the concentration of the secreted protein is related to the distribution of CAR-T cells and its activation level; in other words, the secreted protein accurately delivers the drug to the tumor TME. Therefore, current coding sequences include agonists or inhibitors of T cell binding agents, cytokines, and cell receptors.

Bispecific T cell conjugant BiTE and bispecific antigen have two different functions. One binds to TAA, and the other has high affinity for T cell epitopes (usually CD3), which is the junction that recruits T cells to the tumor. Compared with BiTE, the bispecific antigen contains a complete antigen structure. Fc activates T cells through this structure, which may improve the tumor-killing activity of CAR-T cells.

In the clinical trial of AMG 420, BCMA-CD3 BiTE was used for CAR-T cell therapy in R/R MM patients, with an overall response rate of 31% (13/42), 9 patients obtained CR, and 2 achieved VGPR. Two achieved partial responses; the median response time was 8.4 months [61].

However, in the group of patients who received the maximum tolerated dose (400 μg/d), the response rate was 70% (n = 7 of 10). Five of the patients had MRD-negative complete remission, one achieved PR, and one achieved VGPR. All 7 patients responded during the first cycle, and some of the responses lasted> 1 year [62]. Combined with its “off-the-shelf” characteristics, BiTE will soon be clinically approved for R/R MM patients.

One possible explanation for unresponsive cases may be the anergy of T cells, even though T cells are recruited to TME. The response rate of R/R MM patients to CAR-T treatment is moderately high, with an objective response rate of 85%, and about 30% of 33 patients showed a complete response [12].

Cytokines are the main regulators of inflammation in a normal immune state. However, TME may weaken the function of immune cells, such as defective APCs, tumor-associated macrophages (TAM) and myeloid-derived suppressor cells (MDSC) in the tumor environment to inhibit their contact, or it may secrete immunosuppression Molecules to prevent the immune system from responding effectively to tumors. When TME actively fights solid tumors, T cell therapy cannot obtain a favorable response in solid tumors.

The combination of IL-7, IL-12, IL-15 and other pro-inflammatory cytokines with a variety of immunotherapies including CAR-T cells gives CAR-T cells powerful tumor-killing activity and the ability to regulate the immune system to kill tumors .

Newly discovered molecules, such as IL-23, also show the promise of improving the efficacy of CAR-T cells by increasing the persistence and anti-TME activity of CAR-T cells [80]. For CAR T cells armored with cytokines, the concentration of cytokines is positively correlated with the number and activity level of CAR-T cells, which may improve accuracy and effectiveness at the same time.

In addition, these cytokines can also promote the formation of T memory cells, thereby increasing the persistence of CAR-T cells and reactivating host T cells to respond to tumors. However, for patients with hematological malignancies, armor cytokines need to be carefully selected to prevent disease progression.

Intrinsic agonists of T cell receptors, such as 4-1BB and OX40, can improve T cell proliferation and cytotoxicity, increase the activity of T cells and their ability to induce immune responses to tumors. In the intracellular domain, these agonists provide CAR-T cells with a second stimulus signal.