The concept and characteristics of dormant tumor cells

The concept and characteristics of dormant tumor cells. After treatment and removal of the primary tumor, some patients did not develop metastasis for a long time, so scientists thought that the dormant tumor cells in the body were not eliminated.

A brief history of research on tumor cell dormancy (documentation)

The concept and characteristics of dormant tumor cells

Rupert Willis proposed the concept of tumor cell dormancy in 1934. In 1954, Geoffrey Hadfield believed that this group of cells had entered a “temporary mitotic arrest” state.

If these dormant tumor cells are randomly activated, they have advanced metastasis.

In fact, the initial description was very clear, but subsequent studies did not insist on using the term initial cancer cell dormancy, and continued to introduce new and overlapping concepts, causing confusion between definitions and understanding. For example, “drug-resistant cells”, “persistent cells”, “tumor-initiating cells”, “metastasis-initiating cells” and “latency-capable cells” to describe a single cell that has the ability to produce tumors.
For example, there is a balance between cell proliferation and death, and the tumor mass remains at a low and undetectable steady-state level, which is called “Tumor mass dormancy”. Although this may lead to clinical “dormancy”, it is clearly different from dormant cancer cells (dormant tumor cells are blocked and do not proliferate). 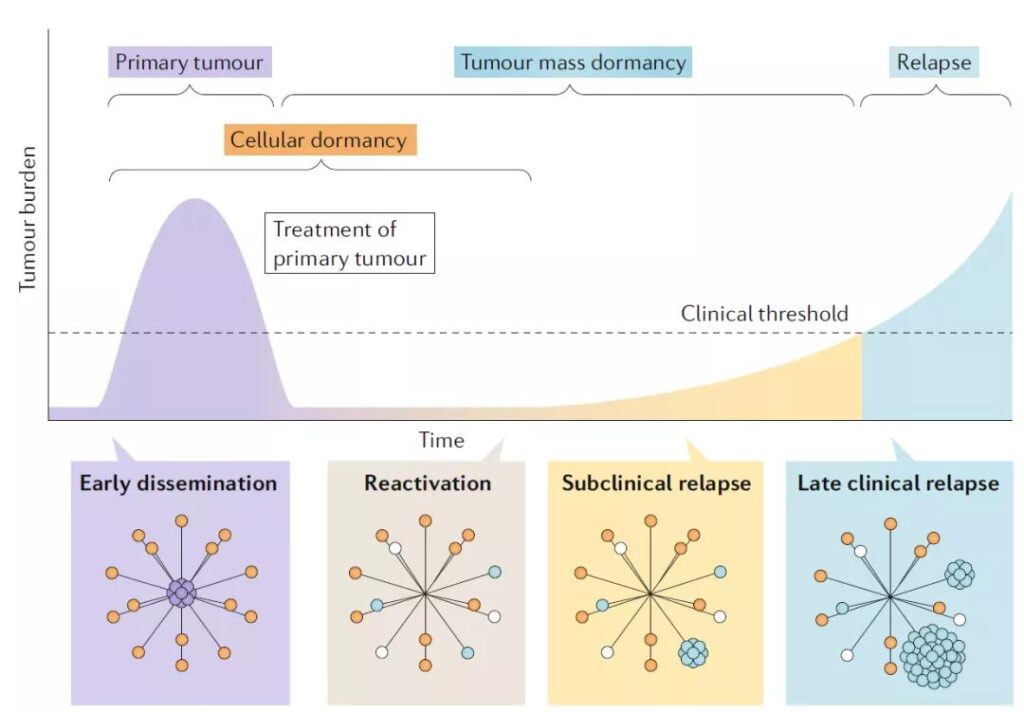 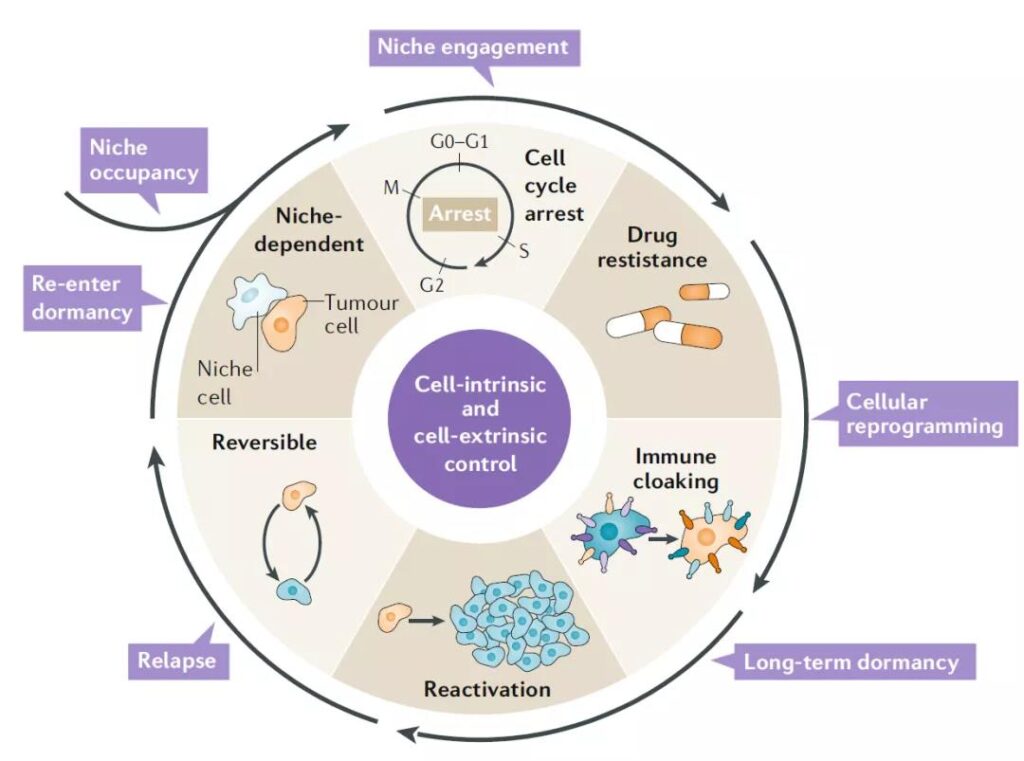 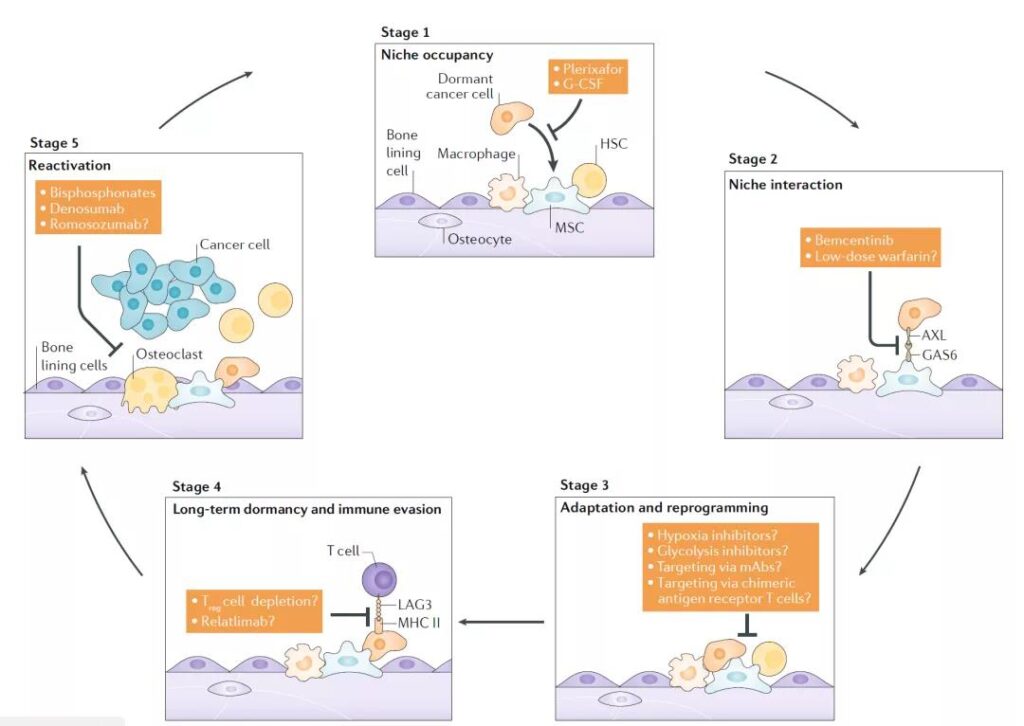 Of course, in addition to molecular guidance, there are also multiple mechanisms involved. Do disseminated cancer cells need to compete and replace niche cells to colonize? After intravenous injection of a medium dose of syngeneic bone marrow containing a small amount of HSCs, myeloablization is required to achieve implantation, which has led to the idea that a limited number of bone marrow HSC niches are occupied.

However, recent studies have shown that when a large number of HSCs are transplanted, many niches around blood vessels are still empty and can be implanted, which leads to a large increase in the number of HSCs in the bone marrow. In contrast, the number of granulocyte-monocyte progenitor cells (GMPs) remained unchanged, indicating that the niche of this cell type was filled.

Step 2: Interact and use Niches

There are complex dynamic interactions between dormant cancer cells and the different cells that make up the niche. Physical factors in the environment, such as the availability of oxygen, may play a role in limiting cell proliferation and promoting drug resistance. MDA-MB-231 breast cancer cells are exposed to chronic intermittent hypoxia in vitro and enter a dormant state characterized by G0-G1 cell cycle arrest. Under hypoxic conditions in the body, exposed tumor cells turn on the dormant mark and easily become dormant.
In multiple myeloma, prostate cancer, and breast cancer, more and more evidence shows that the interaction of cancer cells with niche cells and their secreted molecules induces dormancy, leading to chemotherapy resistance.

Regarding the intraosseous niche, conditioned medium from primary osteoblasts and co-culture with MC3T3 osteoblast precursor cells reduced the proliferation of 5TGM1 multiple myeloma cells. It has been previously shown that extracellular osteopontin in the bone niche induces ALL cells to exit the cell cycle and enter dormancy.

AnnexinA2 in the bone niche has also been shown to induce dormancy by up-regulating GAS6 (the ligand of TAM family receptor tyrosine kinases). GAS6 can be produced by osteoblasts and prevents the proliferation of PC3 human prostate cancer cells in vitro. The dormancy induced by GAS6-Axl signal is mediated by the up-regulation of TGFβ and TGFβR in prostate cancer cells.

Step 3: Reprogram the cells to adapt to the niche

Are dormant cancer cells pre-programmed or are they reprogrammed to dormancy by niches?

The co-culture of 5TGM1 multiple myeloma cells and osteoblast precursor cells can up-regulate several genes involved in dormancy in the body. Although the soluble factors in the conditioned medium can inhibit proliferation in vitro, direct cell-to-cell contact is required to initiate transcription and reprogram dormant cancer cells. The genes related to dormancy are mainly those regulated by the transcription factors IRF7 and SPIC, which indicates that interferon signaling plays a role in the dormant cancer cell niche.

The process of cell reprogramming by dormant cancer cells ensures that they adapt to their niche and escape immune surveillance. The complex interactions between dormant cancer cells and niche innate and adaptive immune cells may play a role in maintaining true cell dormancy.
Tumor cells down-regulate the expression of MHC1 molecules of APC cells and reduce the ability of antigen presentation. Express immune checkpoints, induce T cell exhaustion, etc. Through these mechanisms, tumor cells can evade immune surveillance and can stay dormant for a long time.
Activation and restoration of effector cells and elimination of suppressive immune cells are the main treatment strategies at this stage.
Cytokines: such as IL-2, there are already many companies. You can read: A brief history of IL-2/IL-2R research and drug development (a tribute to the classics, opening a new decade)
Eliminate suppressive immune cells such as Treg: Reading: Roche’s new CD25 antibody selectively eliminates regulatory T cells and enhances anti-tumor immunity
Immune checkpoint inhibitors, etc.

Step 5: The dormant cells in Niches are reactivated

After adapting to the malnutrition environment for a period of time, dormant cancer cells have accumulated enough nutrients to proliferate and get rid of dormancy. In addition, tumor immune microenvironment changes, such as immune senescence, immune damage caused by chemotherapy, the use of immunosuppressants, immune microenvironment heterogeneous immune cells (MDSCs, Treg, TAMs, TANs, etc.), TGF-β, IL-18 And other cytokine expression.

Niches reprogramming, where dormant tumor cells are located, is also a factor in activation.

The processes associated with the formation of new blood vessels also reshape the extracellular environment. The dormant cells residing in the perivascular niche are achieved through endothelial cell interaction mediated by thrombospondin 1, and the germination of new blood vessels stimulates the reactivation of dormant cells and tumor growth through the production of periostin and TGFβ1.

Survival is also the instinct of tumor cells. Find the niches suitable for survival and interact with them to form an environment suitable for your own survival locally.

Escape the immune system through dormancy, develop tolerance to chemotherapy, and create a chance of survival. Under suitable conditions, such as the body’s immune aging and weakening, tumor cells are reactivated and metastasized.