Humans have five senses-sight, hearing, smell, taste, and touch. These senses enable us to recognize the seven colors, recognize the five sounds, perceive passion, taste a thousand flavors, and touch all things. It can be said that people recognize the world by their senses.

However, among the many sensations, pain is definitely an uncomfortable feeling, and it can even cause irreversible damage to the human spirit.

Statistics show that chronic pain affects 19% to 50% of the population worldwide. At present, people usually rely on opioids to treat chronic pain. However, opioids have the adverse side effects of “severe addiction risk”, and with the prolonged use of opioids, opioids will also increase people’s sensitivity to pain, causing them to rely more and more on higher doses of medication.

Encouragingly, on March 10, 2021, researchers from the University of California, San Diego published a titled: Long-lasting analgesia via targeted in situ repression of NaV1 in Science Translational Medicine, a sub-publication of the top international academic journal Science. 7 in mice’s research paper.

The research team used the Cas9 protein (dCas9) with loss of cleavage activity to temporarily block a gene called NaV1.7, and thus successfully reduced the sensitivity of experimental mice to pain. More importantly, this pain relief effect can last for several months without obvious side effects.

The rise of CRISPR technology enables humans to change the expression pattern of genes at their own will. Not only that, more and more CRISPR gene editing tools are emerging. At present, CRISPR technology not only shows its talents in the field of gene editing, but also shows good application prospects in the fields of nucleic acid localization, nucleic acid detection, and cancer treatment.

At the same time, previous studies have shown that the sodium channel protein encoded by the NaV1.7 gene is expressed in neurons that transmit pain in the spinal cord, and for people lacking functional NaV1.7, it is like a hot, sharp touch. The feeling of something like this will not be recorded as pain. On the contrary, overexpression of NaV1.7 will make people feel more pain.

More importantly, the NaV1.7 gene seems to be only related to pain, and no serious side effects have been observed when it is knocked out or mutated.

Based on this, Ana Moreno et al. proposed the research hypothesis of using CRISPR technology to target the inhibition of NaV1.7 gene expression to treat chronic pain diseases. In this study, the researchers used a dCas9 protein lacking cleavage activity, which can still bind to the target gene under the guidance of gRNA and inhibit the expression of the gene.

Schematic diagram of in situ inhibition of NaV1.7 by RAB-dCas9 and ZFP-KRAB in mice

Immediately afterwards, the research team performed spinal cord injections to test the system in experimental mice that had chronic pain symptoms caused by inflammation or chemotherapy. Encouragingly, the researchers found that the treated mice showed a higher pain threshold than the control mice.

Specifically, the treated mice withdrew their paws more slowly under painful stimuli (such as heat, cold, pressure, etc.), and they had less time to lick or shake their paws after injury. 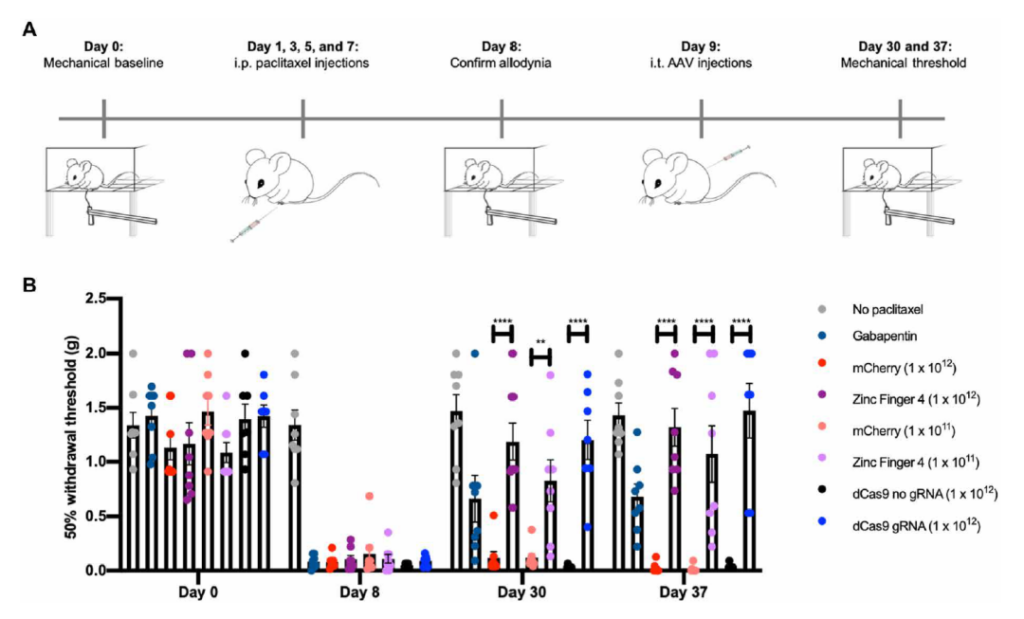 Moreno said that the duration of the drug’s effect is still under evaluation and is expected to last for a long time, and the treated mice did not lose pain sensitivity or show any abnormal motor function changes. 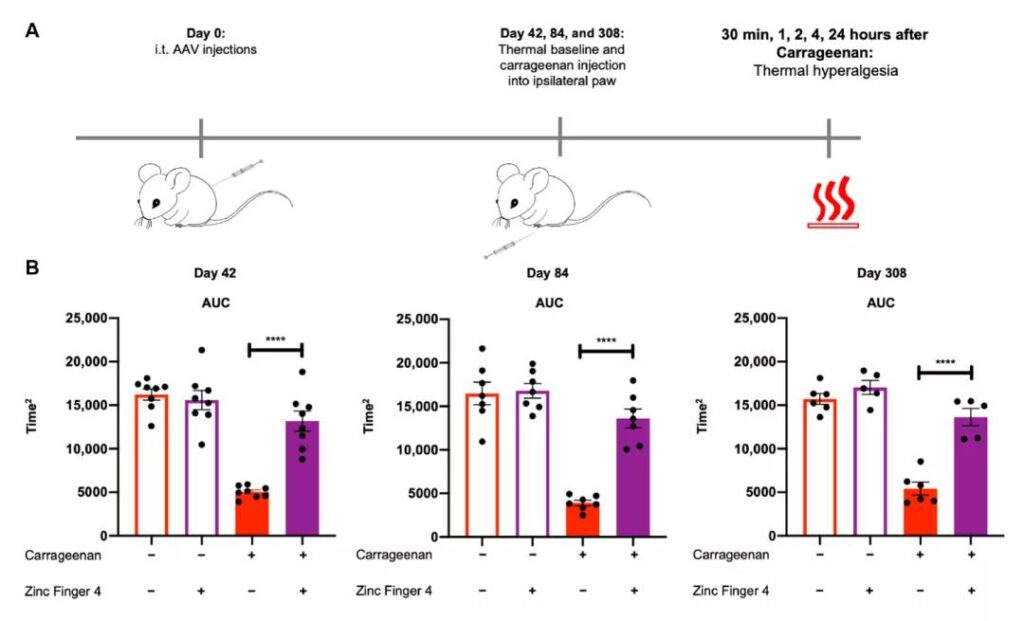 The duration of the drug effect can last for several months

Not only that, in order to further verify their results, the research team then used the zinc finger protein gene editing tool-ZFP-KRAB for testing, which produced the same results as the KRAB-dCas9 system.

In fact, there have been previous studies and developments of compounds or antibodies that specifically target NaV1.7 protein, but many small molecule drugs that target NaV1.7 often fail due to lack of targeting specificity or limited bioavailability. In addition, antibodies are Facing a similar situation. Therefore, it is no exaggeration to say that this research is a transformative result!

Professor Prashant Mali, the corresponding author of this study, said: This study opens the door to the use of gene therapy to treat common and chronic diseases. Some common diseases often result from the wrong expression of genes. If the expression level of this gene can be reduced, it can be reduced to a level that is not disease-causing. This is what the study did-not to completely eliminate the pain phenotype, but to suppress it.

All in all, this study proposes an in situ epigenetic treatment method based on the CRISPR-dCas9 system, which can relieve the pain symptoms of experimental mice for a long time without causing obvious side effects. A feasible opioid replacement strategy will bring good news to the majority of patients suffering from chronic pain!