Essential Knowledge about Immunology.  This article will give you the knowledge about immunology and How  the body’s immune system work。

The word immunity is derived from the Latin “immunis” in Roman times. Its original meaning was “exempt from taxation”, and it was later extended to mean “free from epidemics.” Immunology is the science of the immune response of postgraduate objects to antigenic substances and its methods. More generally speaking, immunity is the body’s recognition of “self” and “non-self” antigens, and the formation of natural immune tolerance to self-antigens. “A physiological function of antigen rejection. Under normal circumstances, this physiological function is beneficial to the body, and can produce anti-infection, anti-tumor and other immune protections to maintain the body’s physiological balance and stability; but under certain conditions, when the immune function is imbalanced, it will also be harmful to the body. Reactions and results, such as hypersensitivity reactions, autoimmune diseases and tumors. 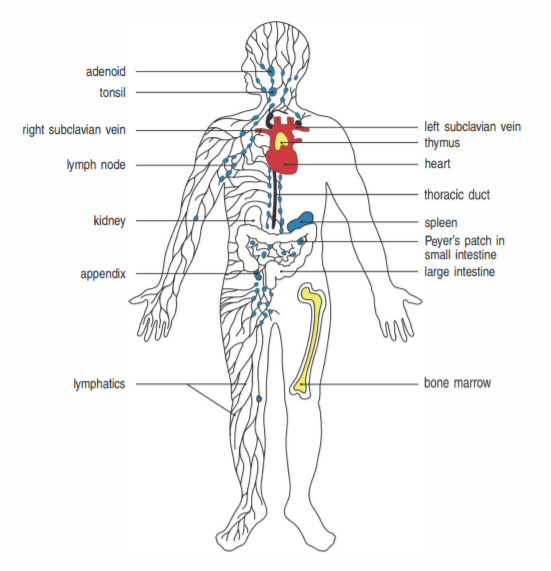 Imagine you are watching a football game broadcast on TV, and the camera has been locked on the close end player, then you can only see him running at full speed on the court and then stop, so you may not understand at all. what’s happening. However, when you watch the same game on the big screen, you will understand that the close end attracted two defenders to follow him and run on the court, leaving the running back unguarded and able to receive the pass and score a touchdown. . The immune system also has many members cooperate with each other to achieve its functions, and it does not make any sense to focus on any single member. This is the meaning of the holistic view. (Tight end and running back are the positions of players in a rugby game)

Physical barriers are our body’s first line of defense against “invaders”, and if “invaders” such as viruses, bacteria, parasites, and fungi want to cause trouble for us, they must pass through these barriers. Many people tend to think that the skin is our main barrier, but in fact the area covered by the skin is only 2 square meters. On the contrary, the mucosa covering our digestive tract, respiratory tract and reproductive system occupies an area of ​​about 400 square meters, which is about the size of two tennis courts. Therefore, we can intuitively feel that the scope of the body that needs to be protected is very large.

Once any “invaders” cross the physical barrier composed of skin or mucous membranes, they will encounter the innate immune system-the body’s second line of defense. The reason why immunologists named this system “intrinsic” is because it seems that all animals are born with it, and many of the weapons in this system have existed for 500 million years.

Suppose you have just taken a hot shower, and when you stepped out of the bathtub and stepped on the floor, a piece of sawdust stuck in your toes, and there happened to be many bacteria on the sawdust, then in the next few hours, the sawdust The punctured area will start to swell, which means that the immune system has started to work. There are swarms of white blood cells lingering in your organization to help you resist the attack of bacteria. In our view, the tissue is a solid whole; but from the perspective of a cell, the tissue is like a sponge full of holes, and individual cells can freely shuttle through the holes. Macrophages are a kind of defense cells that exist in tissues, and they are also the most famous role in the innate immune system. If you are a bacterium, then the macrophage must be the last cell you want to see after entering the body. The image below shows a macrophage preparing to swallow a bacterium under an electron microscope.

We can observe that the macrophage is not waiting for the bacteria to be delivered to the door to swallow it, but it senses the presence of the bacteria, so it stretches out its “tentacles” to actively grab the bacteria. So how do macrophages know where the bacteria are? This is because there are many “tentacles” (ie receptors) on the surface of macrophages, and these “tentacles” can identify the characteristics of “dangerous molecules” carried by common microbial “invaders”. For example, the cell membrane of bacteria is composed of some lipids and sugars, and some of these components are not present in the human body. Such foreign molecules are like saying to the macrophages: “Come and eat me!” Once the macrophages recognize these “dangerous molecules”, they begin to “creep” toward the microorganisms that send this signal. .

When a macrophage encounters a bacteria, it will first engulf the bacteria into a small bag (vesicle) called a phagosome, and then this vesicle containing the bacteria will be transported to the inside of the phagocytic cell, and another A fusion of a vesicle called a lysosome. Lysosomes contain various powerful chemicals and enzymes, which can effectively kill bacteria. In fact, the lethality of these substances is devastating. If they are released inside the macrophages, the macrophages themselves cannot escape the fate of being killed, which is why they are packed in vesicles. Using such a smart strategy, macrophages can effectively annihilate “invaders” without shooting themselves in the foot. This whole process is called phagocytosis, and the following figure shows the whole process of its occurrence. 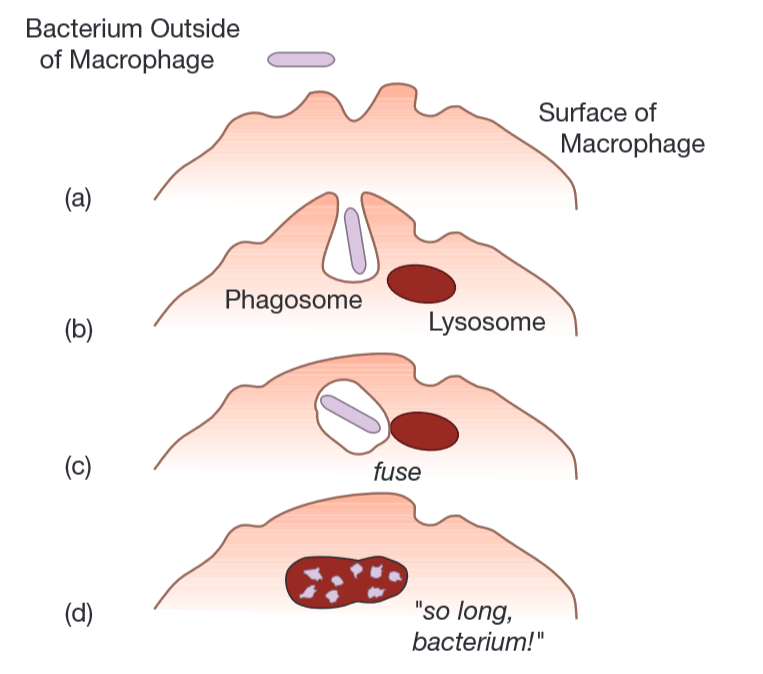 Macrophages have existed in this world for a long time. In fact, the uptake technology used by macrophages is actually an improved version of the amoeba’s predation strategy, and amoeba has lived on the earth for about 2.5 billion years. So why are these cells called Macrophages? “Macro” means “large”, apparently the size of macrophages is very large; and “phage” comes from Greek, meaning “to eat”. So it can be seen from the name that macrophages are a veritable “big food”. In addition to resisting “invaders”, it is actually a garbage collector, and it eats almost everything, not picky eaters at all. Immunologists use this “good appetite” of macrophages, feed them some iron filings and let it swallow them, and then use a small magnet to easily separate macrophages from other cells.

So where do macrophages come from? Macrophages, like other blood cells in the body, are derived from a kind of self-renewing cells in the bone marrow-stem cells. Stem cells can form all blood cells. When a stem cell renews itself, that is, when a stem cell grows and divides into two daughter cells, it follows the principle of “one for me, one for you”, which means that one of the two daughter cells formed by division turns back into a stem cell and retains the self-renewing Ability, and the other will eventually become a mature blood cell. This continuous self-renewal strategy ensures that there will always be stored stem cells that can continuously produce mature blood cells. 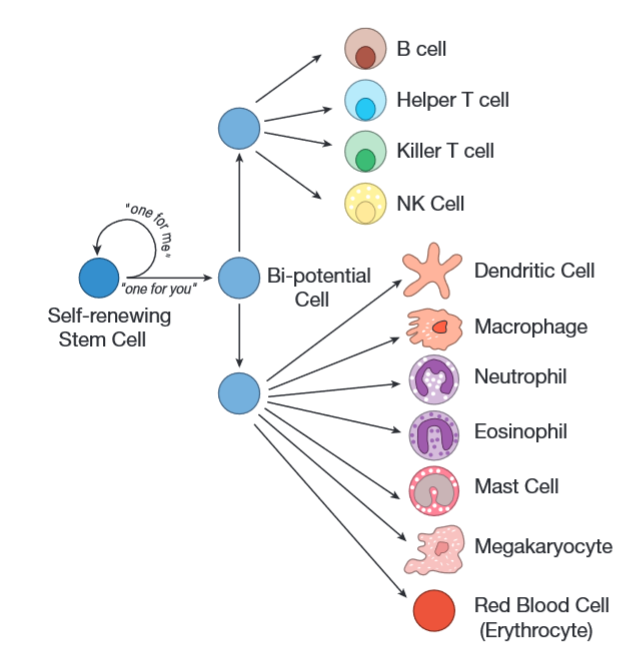 When a daughter cell grows up and matures, it needs to make a “lifetime decision”, that is, what type of blood cell it will differentiate into. Of course, this choice is not random, but made under strict control to ensure that the various blood cells inside the body are sufficient. For example, some daughter cells differentiate into red blood cells, which are responsible for capturing oxygen in the lungs and transporting it throughout the body. In fact, the “stem cell factory” in our body produces more than 2 million new red blood cells every second to replace those cells that are lost due to normal consumption. Other offspring of stem cells may become macrophages, neutrophils, or other types of white blood cells. Just as white wine is not white, these white blood cells are not white, in fact they are colorless. Immunologists use the word “White” to indicate that these cells lack hemoglobin and are therefore not red.

When the cells that eventually become macrophages leave the bone marrow and enter the blood for the first time, they are called monocytes. At any time, there are always about 2 billion of these cells circulating in your blood. This may sound creepy, but you should be thankful for their existence, because without them, the body will be in deep trouble. The average lifespan of monocytes in the blood is 3 days, during which they can move to the capillaries, looking for the gaps between vascular endothelial cells. By extending “pseudopods” between these oval endothelial cells, monocytes can leave the blood to enter the tissues and mature into macrophages. Once in the tissue, most macrophages will wander around, collect all kinds of garbage in the body, and perform their functions when the body is injured and infected with pathogens.

When macrophages destroy the bacteria on the sawdust on your feet, they release chemicals that can increase blood flow near the wound, causing your toes to turn red. Some chemicals can also cause contraction of blood vessel wall cells, causing capillaries to leak fluid into the tissue, causing swelling of the wound. In addition, the chemicals released by macrophages can also stimulate the nerves in the tissues around the wound and transmit pain signals to the brain to warn you of abnormalities in your toes.

In this battle with bacteria, macrophages produce and secrete some proteins called Cytokine. This is a hormone-like signal that promotes communication between cells of the immune system. Some cytokines warn macrophages and other immune cells wandering in nearby capillaries: the battle has begun! As a result, these cells have left the blood circulation and joined the battle against rapidly proliferating bacteria. As the innate immune system leads the fight to eliminate the “invaders”, your toes will soon have a strong inflammatory response. 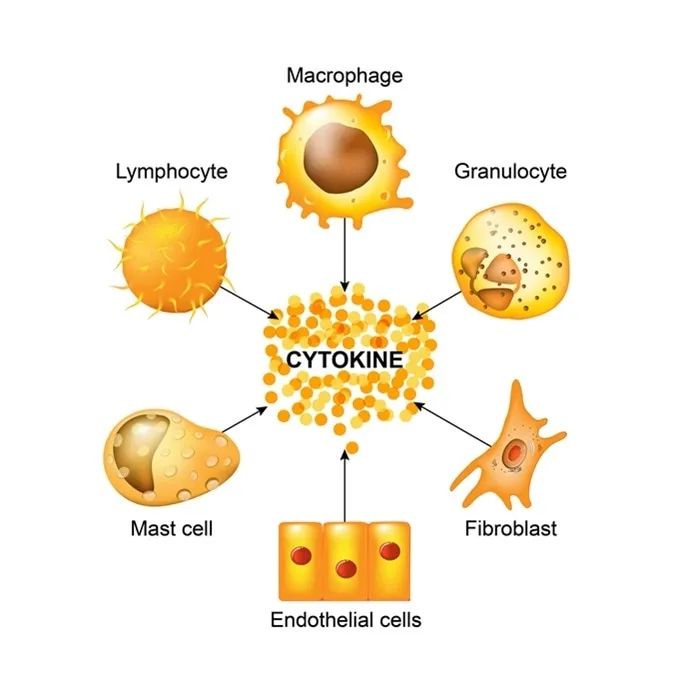 In addition to full-time phagocytes like macrophages that are specifically responsible for engulfing “invaders”, there are other roles in the team of the innate immune system, such as complement proteins that can make holes in the surface of bacteria, and can destroy bacteria , Parasites, virus-infected cells and some natural killer cells of cancer cells (Natural Killer cell). Other teammates of such macrophages will be introduced in detail in the next few issues.