It has now been shown that this process can be blocked by metformin.

Based on this, Guo et al. published a paper titled “Targeting mitochondria to beat HIV-1” in the journal Nature Immunology, elucidating a mechanism leading to an increase in OXPHOS, and proved that this pathway is related to peak viremia and worse The disease outcome is positively correlated.

In addition, they have demonstrated that these increases in OXPHOS can be inhibited in human cells and humanized mice with the widely available drug metformin, reducing viremia and T cell depletion in humanized mouse models, indicating that metformin is HIV -1 Possible treatment for infection.

Guo et al. used the RV217 transcriptome study, involving human patients acutely infected with HIV-1 in Asia and Africa to examine metabolic pathways. In the CD4+ T cell transcriptome, they found that the OXPHOS pathway was significantly up-regulated after infection.

Importantly, this pathway is associated with poor prognosis and may serve as a biomarker for the progression of HIV-1 infection to acquired immunodeficiency syndrome (AIDS). The point at which HIV levels stabilize after acute HIV infection (viral set point) is usually predicted by the peak of viremia (ie, higher acute viral load results in higher viral set point).

OXPHOS is associated with a higher viral set point, which is highly indicative of higher HIV-1 replication during acute infection. Guo et al. next decided to further evaluate whether there is a causal relationship between the increase in OXPHOS and the increase in virus replication, thereby increasing the pathogenesis.

Next, in order to better understand the molecular mechanism that causes the increase in OXPHOS during infection, individual genes related to viremia from the RV217 data set were examined. NLRX1 expression was positively correlated with peak viremia. Similarly, NLRX1 (mRNA and protein) expression increases in response to viral infection in vitro.

Finally, next, Guo et al. evaluated the mechanism by which NLRX1 regulates cell metabolism. NLRX1 has been shown to have multiple effects, including regulating type I interferon response and promoting autophagy and endoplasmic reticulum stress. However, inhibitors of these pathways will not alter HIV-1 replication.

Next, Guo et al. examined the proteome of HIV-1-infected cells depleted by FATSKD5 and found that the mitochondrial electron transport chain complex IV was down-regulated. This is probably because FASTKD5 is a regulator of rRNA and mRNA. Therefore, FASTKD5’s The deletion limits the mitochondrial protein translation and the assembly of the electron transport chain complex.

In summary, therefore, this study reveals the molecular basis involving NLRX1 and FASTKD5, which can increase the response of OXPHOS to HIV-1 infection.

This promotes viremia and is associated with a poor prognosis of the disease. How OXPHOS triggers this effect requires further analysis, as does the exact mechanism by which HIV-1 promotes NLRX1.

Targeting this pathway not only reduces peak viremia and viral set points, but also eliminates T cell exhaustion, a key complication of HIV-1 infection, as it leads to the progression of AIDS.

Given the widespread use of metformin in the population, it may be interesting to retrospectively examine whether individuals receiving metformin have reduced viremia and slowed disease progression.

Current research further emphasizes the importance of changes in immune cell metabolism as a driving factor of the disease, in this case AIDS, and heralds innovative treatment methods. 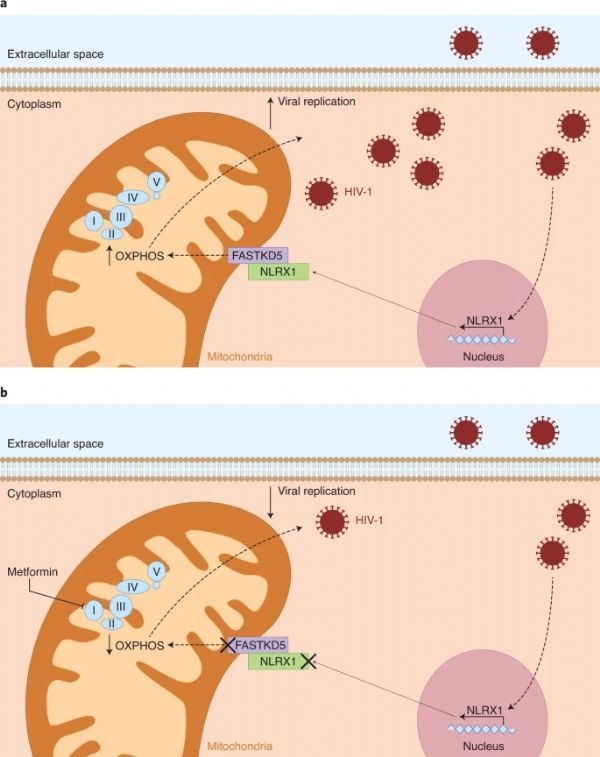