First, the Trop2/PD-L1 CAR recombinant lentiviral vector was constructed (see Figure 1A for details), and then the lentiviral plasmid was extracted and transfected into X-293T cells. 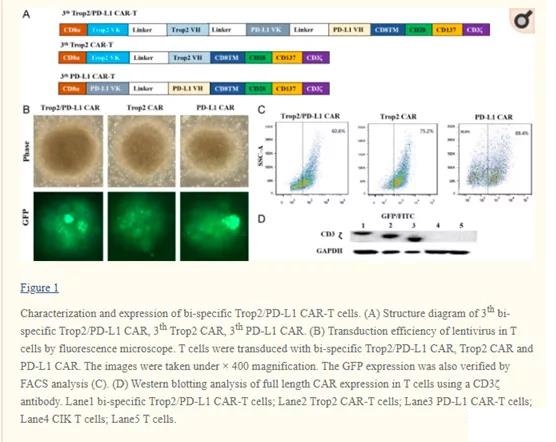 Next, in order to evaluate the function of bispecific Trop2/PD-L1 CAR-T cells and other types of CAR-T cells, we investigated whether they can recognize and kill GC cell lines. We selected several types of GC cell lines based on the different expression levels of Trop2 and PD-L1 (Figure 2A). 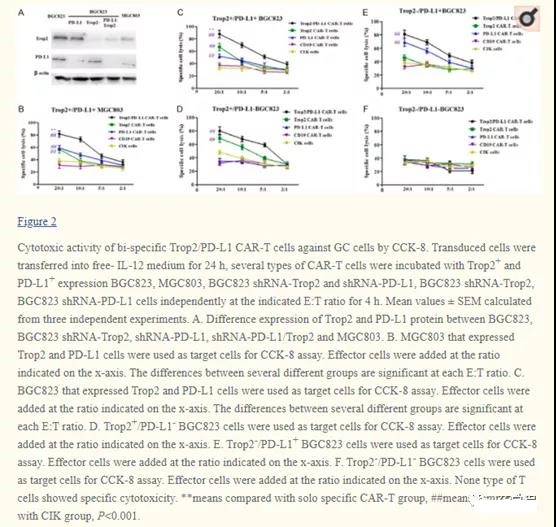 In order to study whether CAR-T cells can be activated by GC cells, the transfected T cells and target cells were co-cultured at a ratio of 10:1 for 24 hours. The IFN-γ and IL-2 in the supernatant were detected by ELISA. After incubation, the level of cytokines released by CAR-T cells in the supernatant increased. When co-cultured with Trop2+ PD-L1+ BGC823/MGC803 cell lines, the level of cytokines released by Trop2/PD-L1 CAR-T cells was at It is the highest among all other types of CAR-T cells. 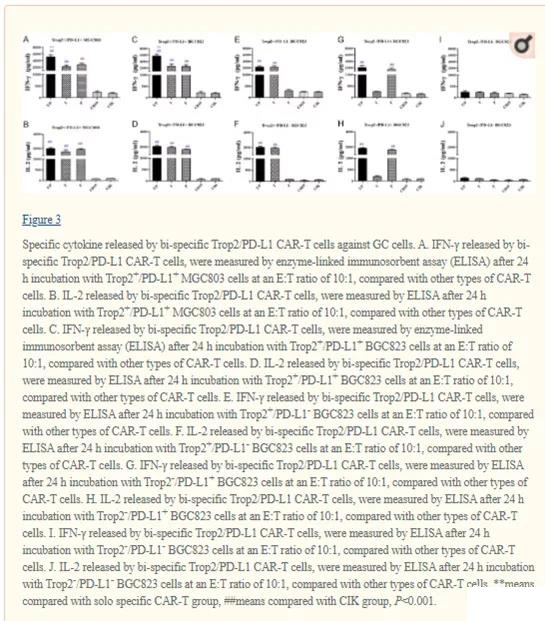 In order to further prove the ability of bispecific Trop2/PD-L1 CAR-T cells in vivo, this study demonstrated the anti-tumor effects of several types of CAR-T cells through a xenograft model carrying human gastric tumors.

We expressed the luciferase gene in the BGC823 cell line and expressed it together with the puromycin resistance gene. After selecting puromycin, we injected 1×106 prepared GC cell line into nude mice. When the average tumor volume reached about 80 mm3, the animals were divided into four groups (Trop2/PD-L1 CAR-T group, Trop2 CAR-T group, CD19 CAR-T group and untreated group). Animals were injected with 1×107 CAR-T cells/100ul on days 22 and 26.

The expression of luciferase was assessed by bioluminescence imaging on days 14 and 30. As shown in Figure 4A, Trop2/PD-L1 significantly inhibited the tumor growth rate on the 16th day after injection. The CAR-T cells on the 16th day after injection were lower than the CD19 CAR-T cell group and the untreated group, and the tumors of the latter grew rapidly. . In addition, the statistical analysis of the tumor growth curve showed that the tumor volume of the Trop2/PD-L1 CAR-T group was significantly smaller than that of the other groups (Figure 4B, 4C). 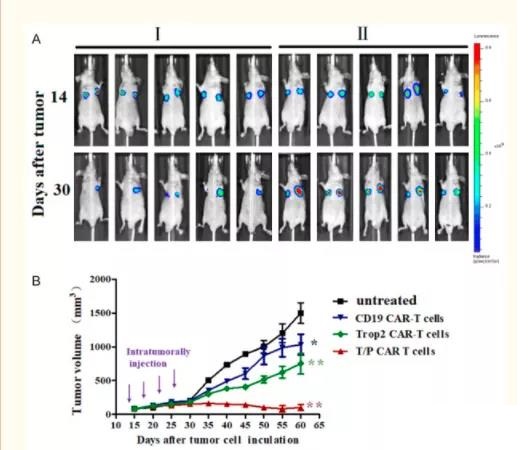 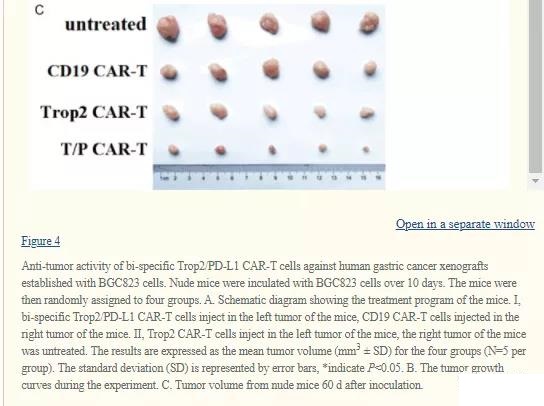 The results show that bispecific Trop2/PD-L1 CAR-T cells can significantly reduce tumor growth through intratumor injection, and its inhibitory effect is better than that of Trop2 specific CAR-T cells and independent control groups (CD19-CAR-T and no Treated group).