STTT: New mechanism of mRNA acetylation modification in the evolution of gastric cancer

mRNA modification is believed to play an important role in the post-transcriptional regulation of gene expression. Current studies have shown that there are a wide range of chemical modifications on mRNA, such as m6A, m5C, m1Am, ac4C and so on. Among them, in 2018, Daniel Arango of NIH in the United States and others reported for the first time that ac4C exists on mRNA, that is, the acetylation modification method. Functionally, it can promote mRNA translation and up-regulate mRNA stability. However, there are no reports about mRNA acetylation modification in the cancer field.

On May 3, 2021, the research group of Professor Li Xun from the First Hospital of Lanzhou University published an online research paper titled: NAT10 promotes gastric cancer metastasis via N4-acetylated COL5A1 in the Journal of Signal Transduction and Targeted Therapy.

This research explains the mechanism of NAT10-mediated mRNA acetylation modification to promote epithelial-mesenchymal transition (EMT) and metastasis of gastric cancer cells, and provides a new strategy for inhibiting tumor progression through targeted intervention of NAT10 and ac4C pathways.

It is reported that this is also the first international research result on the mechanism of mRNA acetylation modification involved in cancer progression.

Figure 1. The scientific diagram of this article

In the study, the team members first found that NAT10 expression is widely up-regulated in gastric cancer; NAT10 up-regulation is closely related to the poor prognosis of patients and lymph node metastasis. Further cell and animal experiments revealed that NAT10 protein can promote EMT and metastasis of gastric cancer cells in vivo. 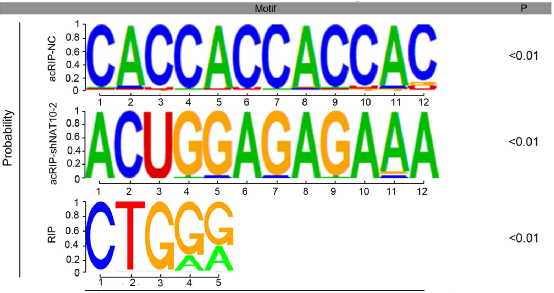 Figure 2. Epibiology provides acRIP-seq database construction sequencing and bio-information analysis services. The motif diagram shows the classic ac4C modified motif in the knockdown gastric cancer cell gene (the first row); after knocking down the expression of the NAT10 gene in gastric cancer cells, there is no ac4C-related motif (the second row).

This study further proved that the NAT10 protein can directly interact with COL5A1 mRNA, by up-regulating the modification level of the ac4C site located in the 3′-UTR region of the COL5A1 mRNA molecule to maintain the stability of COL5A1 mRNA and up-regulate the expression of COL5A1.