Nature: The splitting of mitochondria has important strategies and purposes

Nature: The splitting of mitochondria has important strategies and purposes.  During the French Revolution, Lavoisier, the father of modern chemistry, unfortunately ended his life on the guillotine. The famous scientist discovered the key process of biological energy production just before the doom, which he called respiration. .

He believes that breathing is “the slow burning of carbon and hydrogen, similar to the self-consumption of a lamp or a lighted candle. From this point of view, breathing animals are veritable flammable substances, they burn and consume themselves”, This is an epoch-making viewpoint. But how is this “burning” controlled in the cell?

People have been exploring hard until 150 years after the Lavoisier era, an organelle called mitochondria was finally found to be the place where “burning” took place.

Nowadays, the study of mitochondria has become a hot field of cell biology, and it is known as the “power factory” of cells. In a sense, breathing is the same as burning, with the collateral damage of “wax torch turns into ashes and tears begin to dry”. Active mitochondria will gradually “wear out” during breathing and become defective, and even cause mutations in the genome of the mitochondria.

In different environments, mitochondria seem to have different considerations for their own survival methods. Recently, Tatjana Kleele of the Federal Institute of Lausanne, Switzerland, made new discoveries about mitochondria [1]. 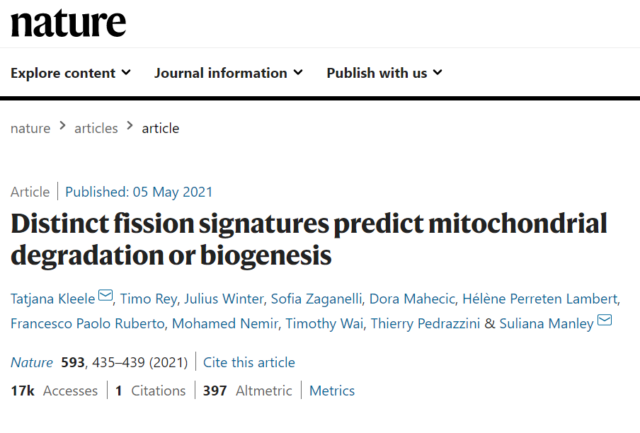 They found through research that before the mitochondria divide in the periphery, there will be an increase in Ca2+ and reactive oxygen free radicals (ROS), and a decrease in membrane potential and pH, suggesting physiological and biochemical characteristics such as oxidative damage and cell stress.

They designed an experiment to irradiate the cells with ultraviolet (UV), and found that the probability of cell mitochondria division increased greatly after UV irradiation (Figure 3). This indicates that mitochondria divide through the periphery under the unfavorable environment of cell adversity stress to achieve the strategy of “losing the car to protect the handsome” and stopping loss in time.

Figure 3. Changes in the division of mitochondria before and after UV irradiation

Split in the middle

Interestingly, the study by Tatjana Kleele et al. also found that adversity stress is not the only cause of mitochondrial division. It also occurs in the active phase of cell growth and cell division, and the main intermediate division is carried out at this time.

In the study of the molecular mechanism of the two split modes, they found that both the mid-region split and the peripheral split were related to the accumulation of DRPI protein. DRPI can be activated by different molecular mechanisms to further drive the division of mammalian mitochondria, and the protein factors involved in different division methods are also different.

Figure 5. Schematic diagram of the middle (left) and peripheral (right) divisions of mitochondria

Tatjana Kleele et al. conducted a fine spatiotemporal analysis of mitochondria and found that before the occurrence of peripheral division, ROS and Ca2+ gradients were formed on both sides of the division site, and this gradient actually exists even when the inner mitochondrial membrane does not divide independently. This phenomenon can appear on a single cristae of the mitochondria. They speculated that the peripheral division can accurately locate the division site through this gradient.

The two mitochondrial divisions with distinct mechanisms and functions found in this article have important physiological and pathological significance.

Previous studies believe that the excessive frequency of mitochondrial division is a signal sign of a variety of diseases, and the inhibition of division by drugs is a potential treatment method.

Therefore, only by understanding the “big wisdom” of mitochondria can we find more reasonable and specific treatments.