Flavivirus is a type of virus transmitted mainly through mosquito vectors, including dengue virus (DENV), West Nile virus (WNV) and Zika virus (ZIKV), etc., are widespread in tropical and subtropical regions and are extremely harmful. For example, in 2015, the Zika virus broke out in South America and spread to more than 80 countries and regions around the world, and it was found that the infection of pregnant women can cause miscarriage, neonatal microcephaly and Guillain-Barré syndrome and other major diseases, which are a serious threat human health.

Currently, there are no effective antiviral drugs and vaccines for most flaviviruses.

Currently, there are no effective antiviral drugs and vaccines for most flaviviruses. The development of broad-spectrum protective therapies and vaccines has become a key but unrealized goal in the field of flavivirus prevention and control. Previous flavivirus therapeutic targets and vaccine designs focused on the E protein on the surface of the virus envelope.

However, the protection range of antibodies induced by E protein is limited. More importantly, in the process of dengue virus infection and vaccine development, it is found that E protein immunization can induce the production of antibodies with cross-reactivity but poor neutralization ability. When type dengue virus, these antibodies will produce antibody-dependent enhancement (ADE) effect, which will lead to more serious infections. This poses a major challenge to the development of safe and effective broad-spectrum vaccines.

Discovered a monoclonal antibody 1G5.3 that has protective effects on a variety of flaviviruses, and revealed the mechanism of action of the broad-spectrum protective antibody of NS1 for the first time, pointing out that the flavivirus non-structural protein NS1 can be used as a new target for universal vaccine design Point to effectively avoid the ADE effect.

Zika virus and other flaviviruses encode a total of 10 proteins, of which the non-structural protein NS1 is the only important protein secreted by the virus and interacts with the host, which plays a key role in virus replication, pathogenicity and immune escape. NS1 forms a homodimer in the cell, combines with lipids in the intracellular membrane system, and participates in virus replication. At the same time, NS1 can also form a homohexamer composed of 3 dimers, which is secreted in the cell in a soluble form. In addition, it interacts with the host immune system and other host factors to help the virus escape and strengthen pathogenicity.

From 2016 to 2017, the team of academician Gao Fu and researcher Shi Yi took the lead in analyzing the C-terminal molecular structure of Zika virus NS1, revealing the different surface charge distributions of different flavivirus NS1, and then analyzing the full-length Zika virus NS1 protein The dimer structure has discovered the key area of ​​NS1 membrane binding, and has a deeper understanding of NS1 from the structure. Collaborator Paul R. Young of the University of Queensland, Australia discovered in 2015 that DENV NS1 is a key pathogenic factor of DENV, which can destroy the integrity of the vascular endothelial cell layer by activating the TLR4 pathway, which may be related to the vascular leakage of dengue patients. Symptoms are related.

It is worth noting that NS1 is secreted by infected cells and is abundant in the blood of infected patients. Therefore, antibodies targeting NS1 can have an antiviral effect by inhibiting the function of NS1. Previous studies have found that in a variety of flavivirus infection models, mice vaccinated with NS1 vaccine can be protected from lethal virus attack. Importantly, the NS1 protein is different from the E protein and is not located on the surface of the virus, so the risk of ADE caused by the NS1 antibody is very low. Although these characteristics indicate that NS1 is a promising target for vaccines and therapeutic antibodies, the scope and mechanism of action mediated by broad-spectrum NS1 antibodies remain unclear.

Based on these studies, researchers hope to find a broad-spectrum intervention that targets NS1, so as to achieve the goal of broad-spectrum resistance to multiple flaviviruses. The researchers screened a monoclonal antibody 1G5.3 and found that it binds to NS1 of DENV and ZIKV. By means of structural biology, the complex structure of 1G5.3 with DENV-2 and ZIKV NS1 was analyzed separately, and it was found that it binds to the top of NS1 C-terminal β ladder domain, so it can bind to both NS1 dimer and NS1 NS1 hexamer secreted outside the cell (Figure 1). 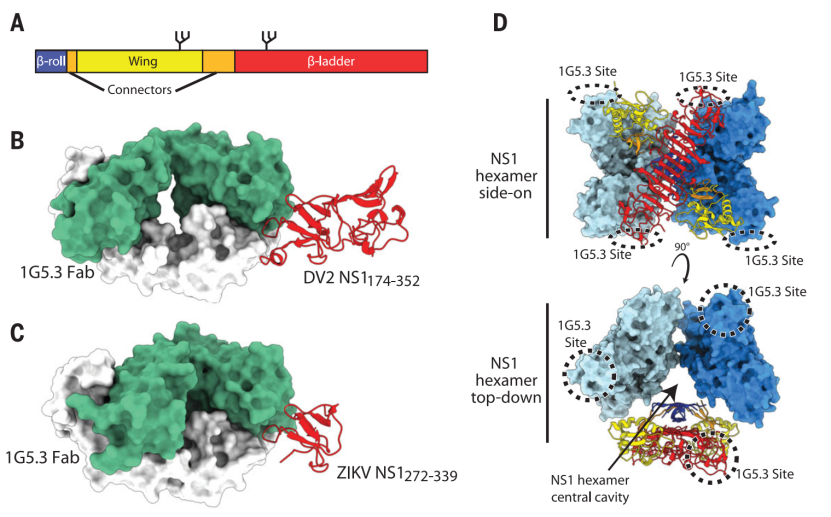 Subsequently, the researchers found that 1G5.3 binds to the NS1 of different flaviviruses such as WNV, Japanese encephalitis virus (JEV), yellow fever virus (YFV) and the potentially threatening Usutu virus (USUV). The binding epitope is very Be conservative (Figure 2).

Figure 2 Antibody 1G5.3 binds to the conserved region of the C-terminus of different flavivirus NS1

Subsequently, it was found in a variety of cell models that antibody 1G5.3 can inhibit the permeation of the endothelial cell layer induced by a variety of flavivirus NS1. In mouse models, it was proved that antibody 1G5.3 can effectively reduce virus titer and serum concentration. The content of NS1 can effectively inhibit the systemic vascular leakage induced by DENV infection, and the blocking mechanism does not depend on the Fc-mediated effector function. 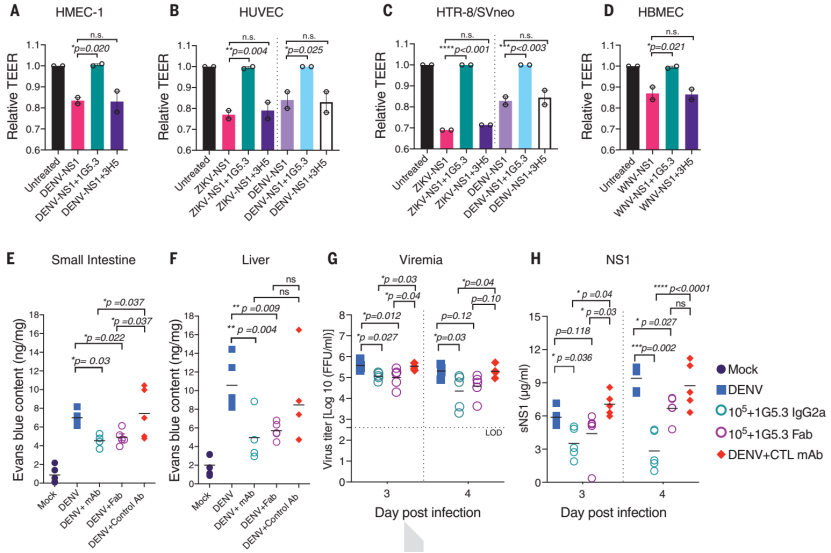 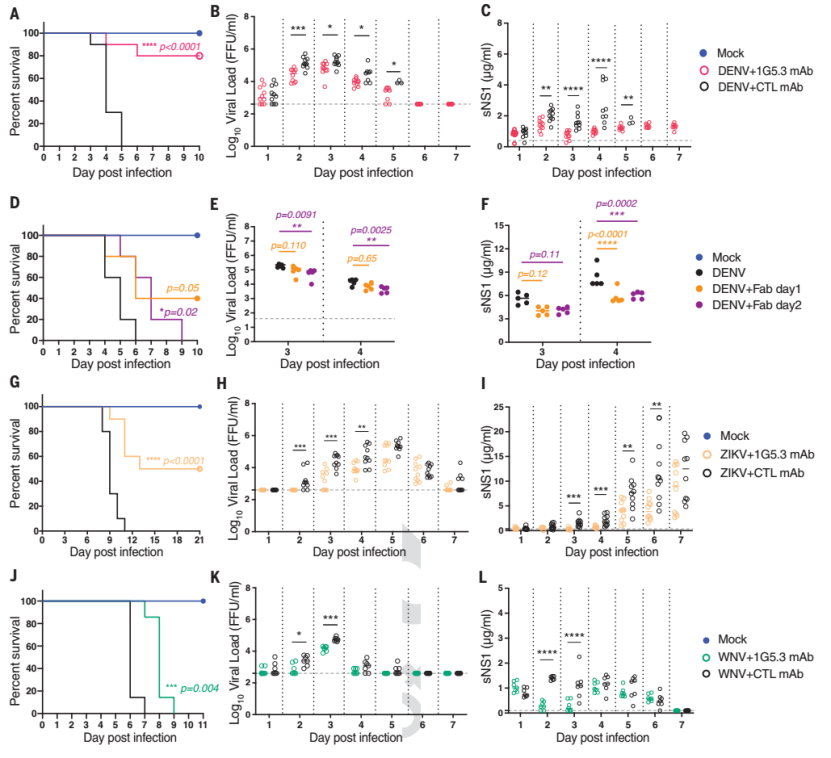 Figure 4. Antibody 1G5.3 has a therapeutic effect on DENV, ZIKV, and WNV infections

This study is the first to characterize the structure of a broad-spectrum protective NS1 monoclonal antibody, reveal the molecular basis of cross-protection and the mechanism of action of protective antibodies, and provide a new idea for the design of a general vaccine for flavivirus.

Dr. Naphak Modhiran from the University of Queensland in Australia and Associate Research Fellow Song Hao from the Beijing Institutes for Biological Sciences of the Chinese Academy of Sciences are the co-first authors of this article. Academician Gao Fu, researcher Shi Yi and Professors Paul R. Young and Professor Daniel Watterson of the University of Queensland are the joint first authors of this article. Author. Researcher Qi Jianxun from the Institute of Microbiology gave strong support.

Co-crystallization with DENV-1 and DENV-2 serotype NS1 proteins revealed the binding site of the protective antibody 2B7. Similar to 1G5, 2B7 also recognizes a conserved epitope in the C-terminal β-ladder domain of NS1, and also has the ability to bind a variety of flavivirus NS1 proteins with a broad spectrum, and can eliminate blood vessel leakage in the body and significantly reduce the lethal infection of DENV. Mortality of rats.

In general, the publication of these two back-to-back articles revealed for the first time the mechanism of action of broad-spectrum therapeutic antibodies targeting NS1 protein, paving the way for the application of such broad-spectrum therapeutic antibodies, and also for the development of general flavivirus vaccines. Development provides a new direction.