In fact, the comprehensive clinical research results of Enhertu (DS8201), the heavy antibody-drug conjugate (ADC), can be described as “strength grabbing the spotlight”. Although the line of treatment started in the future, the clinical data is all over breast, gastric, and gastric cancer. Lung cancer and colorectal cancer have brought new treatment hopes to patients with multiple cancers of HER2 mutations, showing extraordinary potential!

At the European Society of Medical Oncology (ESMO) annual meeting held on September 16-21 not long ago, the results of more than one DS-8201 studies were refreshed again, sweeping the four major cancer types of lung, breast, gastrointestinal, and undiminished style. Today, the editor of Cancer Free Home will sort out the latest research progress of this broad-spectrum ADC new drug DS-8201.

The risk of recurrence is reduced by 72%, DS-8201 challenges the second-line standard treatment for breast cancer

The results of the phase 3 trial of DESTINY-Breast03 identified this time are the first multi-center, open, randomized, head-to-head comparison of the efficacy and safety of ADC drugs (DS8201 and T-DM1) in the treatment of HER2-positive advanced breast cancer. Phase III clinical study.

Patients with unresectable or metastatic HER2-positive breast cancer who had previously been treated with trastuzumab (Herceptin) and taxanes in an advanced or metastatic setting were included. It is worth noting that these patients are allowed to have clinically stable, treated brain metastases.

The above data shows that, compared with TDM1, DS-8201 can reduce the risk of disease progression or death in patients with HER2-positive metastatic breast cancer by up to 72%! 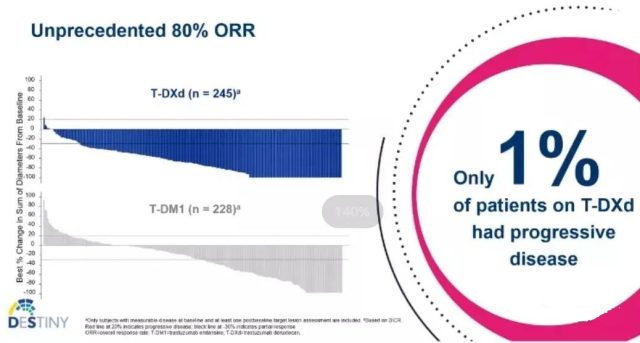 In January 2021, the FDA granted a new antibody-conjugated drug ARX788 fast track designation, aimed at accelerating the marketing of this advanced anti-cancer therapy, and bringing better treatment to patients with advanced HER2-positive breast cancer who have progressed after first-line treatment choose. This is also an important milestone for ARX788. It is expected that ARX788 will be approved by the FDA as soon as possible.

The results of this clinical trial were announced at the San Antonio Breast Cancer Symposium in December 2020. It is worth mentioning that in the Phase 1 trial of HER2-positive breast cancer in China, the objective response rate was as high as 74%, among which 19 patients There were 14 responders, and the disease control rate was as high as 100%.

In the phase 1 HER2-positive pan-tumor trials conducted in the United States and Australia, the objective response rate was 67%, 2 out of 3 patients responded, and the disease control rate was 100%.

At present, a number of clinical studies of ARX788 have been initiated around the world. One of them is a clinical study on HER2-positive breast cancer patients who have failed first-line treatments such as Herceptin. Patients are being recruited. Cancer friends who are interested in participating can contact Cancer-Free The Department of Homeland Medicine (400-626-9916) conducts a preliminary assessment.

The disease control rate reached 81%! DS-8201 has become a dark horse for the treatment of advanced gastric cancer

Studies have shown that about 1/5 of gastric cancer patients are HER2 positive. Therefore, in the Phase II clinical trial of DESTINY-Gastric01, the effectiveness of DS-8201 in patients with HER2-positive advanced gastric or gastroesophageal junction (GEJ) adenocarcinoma was evaluated.

At the ESMO conference in 2021, the results of DESTINY-Gastric02 have also been further updated. The trial enrolled 79 patients, each with 6.4mg/kg Q3W standard medication. These patients had previously received 2 or more regimens (including 5-FU, platinum-containing chemotherapy, trastuzumab).

As of April 9, 2021, the study has reached its primary and key secondary endpoints:

Among 79 evaluable patients, the objective response rate of DS8201 for HER2+ gastric cancer or GEJ patients evaluated by the independent central review (ICR) was 38%, and the disease control rate could reach 81%.

The median progression-free survival was 5.5 months, and the median duration of remission was 8.1 months. 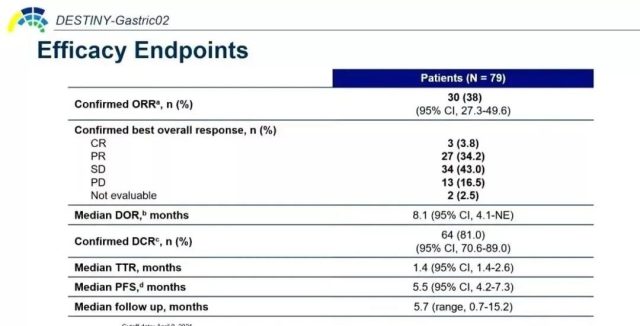 With an objective response rate of 92.3%, DS-8201 leads the targeted therapy of lung cancer and sets off an innovative revolution

The DESTINY-Lung01 study released at the ASCO conference last year is aimed at HER2 mutant (HER2m) unresectable and/or metastatic non-squamous non-small cell lung cancer (NSCLC) that has often received one or more systemic treatments and has disease progression. The patients started, and most of them had received platinum-containing chemotherapy (90.5%) and anti-PD-1 or PD-L1 therapy (54.8%).

The results of the study showed that 61.9% of patients receiving DS-8201 monotherapy (6.4mg/kg) achieved tumor remission, and the disease control rate (90.5%) and median progression-free survival (14.0 months) were significantly improved.

The data was further updated at this year’s ESMO conference. Among the HER2 mutant patients, 1 patient achieved complete remission, 49 achieved partial remission, 34 had stable disease, 3 had disease progression, and 4 could not be assessed. Objective remission was confirmed The rate is 54.9%, and the disease control rate is as high as 92.3%! 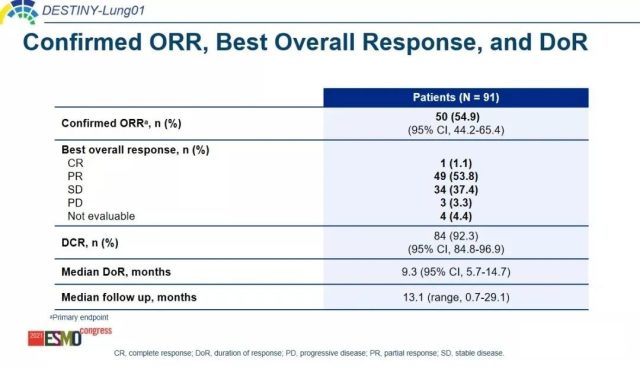 The median progression-free survival of patients was 8.2 months, and the median overall survival was 17.8 months.

Studies have also shown that regardless of the type of HER2 gene mutation, patients may benefit from the treatment of DS-8201.

DESTINY-CRC01, announced at the ASCO meeting in 2020, is a phase II clinical trial for HER2-positive, unresectable and/or metastatic colorectal cancer patients who have previously received two or more standard treatments. 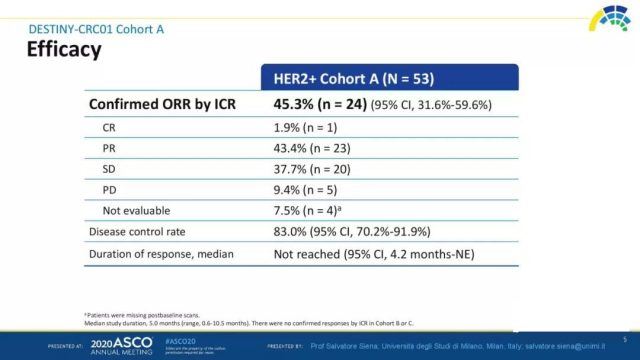 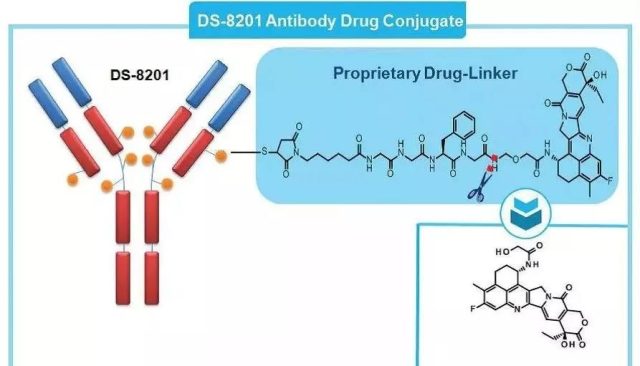 The picture shows the design structure of DS-8201. The small orange balls in the picture are chemotherapy drugs (source dsi.com)