Precisely guided myeloma drugs! Pepaxto, the first peptide-drug conjugate, withdrawn from the US market: Phase 3 clinical failure in the treatment of multiple myeloma!

Pepaxto is the first anti-cancer peptide-drug conjugate (PDC), which can efficiently introduce the alkylating agent melphalan into myeloma cells. 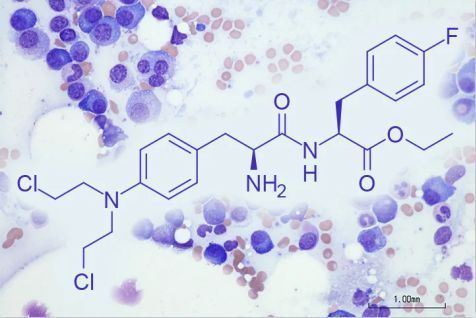 Oncopeptipes AB is a pharmaceutical company specializing in targeted therapies for refractory blood diseases. Recently, the company announced that it has decided to withdraw the targeted anticancer drug Pepaxto (melphalan flufenamide, also known as melflufen) from the US market .

The reason is: The Phase 3 OCEAN study failed , and the results showed that: in the intention-to-treat (ITT) patient population, the overall survival hazard ratio (HR) was 1.104. This decision was made after interaction and dialogue with the US FDA .

Pepaxto was approved by the US FDA on February 26, 2021, combined with dexamethasone, for the treatment of adult patients with relapsed or refractory multiple myeloma (MM). Specifically, it is an adult patient with relapsed or refractory MM who has received at least 4 therapies and whose disease is ineffective against at least one proteasome inhibitor, one immunomodulator, and one anti-CD38 monoclonal antibody. It is particularly worth mentioning that Pepaxto is the first anti-cancer peptide-drug conjugate (PDC) approved by the US FDA .

Oncopeptides said that in the dialogue with the FDA, the agency apparently did not believe that the Phase 3 OCEAN study met the standards of confirmatory research. Oncopeptides believes that the OCEAN research data has scientific significance, and these findings are worthy of further evaluation. Oncopeptides will work with the FDA to continue to provide the drug to patients currently undergoing Pepaxto treatment.

In September of this year, Oncopeptides announced the data of the Phase 3 OCEAN study at the 18th International Myeloma Symposium (IMW) held in Vienna. This is a direct head-to-head study, carried out in patients with relapsed and refractory multiple myeloma (RRMM) who are refractory to lenalidomide and have previously received 2-4 lines of treatment, comparing the + dexamethasone regimen , Efficacy and safety of pomalidomide + dexamethasone regimen.

The results announced at the IMW meeting showed that according to the independent review committee (IRC) assessment, the study reached the primary endpoint of progression-free survival (PFS): the median PFS in the Pepaxto group was 6.8 months, while that in the pomalidomide group was At 4.9 months, the hazard ratio (HR) was 0.79, and the p-value was 0.03. The key secondary endpoint results in the intention-to-treat (ITT) population are: overall survival (OS), which is favorable for pomalidomide, with an HR of 1.10; overall response rate (ORR), with a higher ORR value in the Pepaxto group, 33%. The pomalidomide group was 27%.

In this study, compared with pomalidomide + dexamethasone, Pepaxto + dexamethasone treatment resulted in a significant increase in grade 3/4 hematological adverse events. These are clinically manageable and consistent with previous reports, but Pepaxto requires more dose adjustments than pomalidomide.

Pepaxto (melflufen) is a lead drug from Oncopeptides’ proprietary peptide-drug conjugate (PDC) platform. This is a first-in-class PDC that targets aminopeptidase. The effective load of the alkylating agent melphalan (also known as melphalan) is quickly delivered to tumor cells. Due to its high lipophilicity, melflufen can be rapidly absorbed by myeloma cells. Once inside the cell, the conjugated peptide of melflufen will be cleaved by aminopeptidase immediately, releasing the hydrophilic alkylating agent to load melphalan, and being trapped in the cell, causing further influx and lysis of melflufen until the cell All external melflufen was consumed.

Melflufen is activated by aminopeptidase, which is present in all human cells but is overexpressed in many cancers, including myeloma . Aminopeptidase plays a key role in DNA repair, cell proliferation, programmed cell death and tumor angiogenesis. In in vitro experiments, due to the increase in the concentration of the alkylating agent melphalan retained within the cell, melflufen is 50 times more potent than melphalan in myeloma cells, and can rapidly induce irreversible DNA damage in myeloma cells, leading to apoptosis . In preclinical studies, melflufen has shown cytotoxic effects on myeloma cells resistant to a variety of other therapies (including alkylating agents), and has also been shown to inhibit DAN repair induction and angiogenesis in preclinical studies. 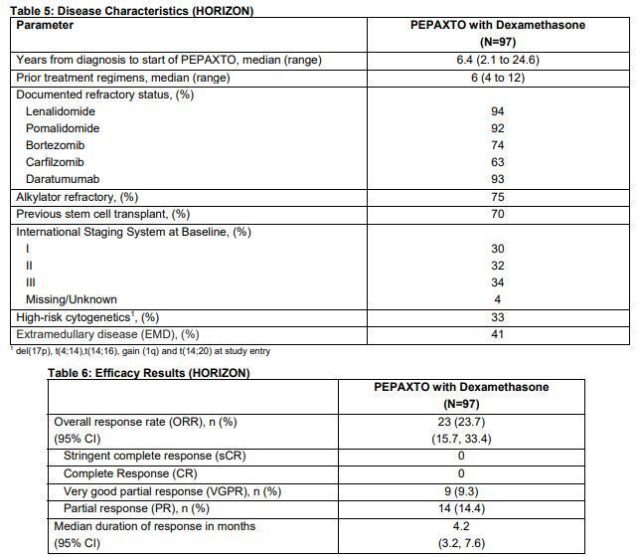 Previously, the FDA accelerated the approval of Pepaxto, based on the results of the pivotal Phase II HORIZON study. According to the research data, Oncopeptides has submitted a conditional marketing authorization application for Pepaxto to the European Medicines Agency (EMA), which is currently under review. The HORIZON study evaluated the efficacy and safety of intravenous melflufen combined with dexamethasone in the treatment of adult patients with relapsed or refractory multiple myeloma (MM) who have received multiple regimens and have a poor prognosis. A total of 157 patients were enrolled in the study, of which 97 were refractory to three types of drugs, had received at least 4 therapies, and their diseases were affected by at least one proteasome inhibitor, one immunomodulator, and one anti-CD38 monomer. Adult patients with relapsed or refractory MM who do not respond to treatment.

The results showed that among the 97 patients, the overall response rate (ORR) was 23.7%, and the median duration of response (DOR) was 4.2 months. In addition, melflufen combined with dexamethasone showed therapeutic activity in patients with extramedullary disease (EMD, 41% of 97 patients), which is an aggressive and drug-resistant disease with a poor prognosis.

Conclusion: The combination of melflufen and dexamethasone will provide an important treatment option for adult patients with relapsed or refractory MM who are difficult to treat and have a poor prognosis, including three-drug refractory myeloma patients and extramedullary diseases (EMD). ) Patients . In this study, the melflufen+dexamethasone regimen treatment showed a lasting remission, and it deepened with the extension of treatment time, which indicates that patients can benefit from long-term treatment.