Bayer “broad-spectrum” anticancer drug Vitrakvi has been approved by Japan

Bayer recently announced that Japan’s Ministry of Health, Labour and Welfare (MHLW) has approved its precision oncology drug Vitrakvi (larotrectinib), which is an oral TRK inhibitor designed to treat the presence of neurotrophic tyrosine in tumors. Children and adults with advanced or metastatic solid tumors with NTRK gene fusion. At present, Vitrakvi has been approved in many countries and regions around the world, including the United States, the European Union, and the United Kingdom. Applications in other regions are ongoing or planned.

The approval of Vitrakvi on the market will provide Japanese patients and doctors with a highly selective therapy specifically designed for adult and child TRK fusion cancer. Regardless of tumor type or patient age, it has the potential to significantly improve treatment results. Previously, anticancer drugs were mainly used for cancer in a certain part of the body, and Vitrakvi was developed specifically to treat patients with TRK fusion cancer, no matter where the tumor originated in the body. Vitrakvi is an important advance in the fight against this rare cancer because it will replace expensive treatments that are not specifically targeted at this type of cancer and have not proven effectiveness and safety in this type of patient population.

Scott Z. Fields, MD, Senior Vice President and Head of Oncology Development, Bayer Pharmaceuticals, said: “Therapeutic drugs that directly target genomic abnormalities that drive tumor growth, such as Vitrakvi, can provide value to patients and doctors in Japan, regardless of tumor type or patient. Regardless of age, there is the potential to significantly improve treatment outcomes. This approval further emphasizes the importance of high-quality and accessible genomic testing to more accurately identify patients who are most likely to benefit from NTRK gene fusion treatment of tumors. It supports Clinicians give the right patients the right, effective and safe treatment at the right time.” 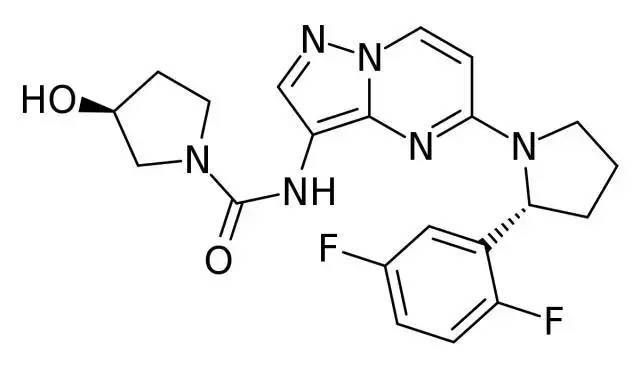 TRK fusion cancers are generally rare, can affect children and adults, and occur at different frequencies in different tumor types. When an NTRK gene is fused with another unrelated gene to produce an altered TRK protein, TRK fusion cancer will occur. The altered protein, or TRK fusion protein, becomes constitutively active or overexpressed, triggering the activation of the intercellular signaling cascade. These TRK fusion proteins act as the driving factors of oncogenes and can promote the spread and growth of tumors no matter where the tumor originates.

Vitrakvi is a histology-independent treatment method specifically developed to treat tumors carrying NTRK gene fusions, regardless of where the tumor originated in the body. In children and adult patients with TRK fusion tumors, Vitrakvi has strong curative effects, including for primary central nervous system (CNS) tumors and brain metastases, providing high remission rates and long-lasting remissions, regardless of the patient’s age and tumor histology .

At the end of November 2018, Vitrakvi won the world’s first batch in the United States, becoming the first oral TRK inhibitor approved in history, and also the first “unrestricted cancer type, broad-spectrum” targeted anticancer drug that has nothing to do with tumor type. . Currently, Vitrakvi has been approved in many countries and regions around the world, including the European Union. (