Targeted drug Truseltiq for cholangiocarcinoma effectively prolongs survival.  Cholangiocarcinoma is a malignant tumor, accounting for about 3%-5% of all gastrointestinal malignancies. The median survival time is less than one year.

Recently, the US FDA announced the accelerated approval of Infigratinib (Truseltiq) for the treatment of previously treated patients with locally advanced or metastatic cholangiocarcinoma (CCA) carrying FGFR2 fusion or rearrangement.

In a key clinical trial of patients with advanced, unresectable cholangiocarcinoma, the tumors in the Infigratinib treatment group had clinically reduced tumors.

▌Advanced cholangiocarcinoma, the survival time is less than one year!

Cholangiocarcinoma (CCA) is a malignant tumor that originates in the liver, hilar and bile duct epithelial cells, and is extremely aggressive.

Cholangiocarcinoma accounts for about 3%-5% of all gastrointestinal malignancies. When most patients are diagnosed, they have already developed locally advanced or distant metastases.

At present, the global incidence of cholangiocarcinoma is increasing year by year, but the standard treatment regimen is still chemotherapy. The prognosis of patients with advanced metastasis is poor, and the median survival time is less than one year. 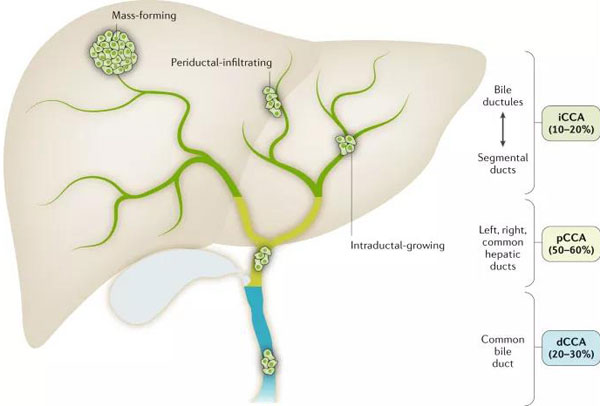 The FGF/FGFR signal transduction is one of the most important pathways in the human body, and it is involved in regulating the development of various tissues and organs and tumorigenesis.

FGFR is mainly divided into four types: FGFR1, FGFR2, FGFR3 and FGFR4. The activating mutation, amplification or fusion of these genes may promote the occurrence and development of malignant tumors.

FGFR2 is the most common subtype of FGFR mutations, which is present in approximately 15%-20% of patients with cholangiocarcinoma. The five-year survival rate for such patients is only 9%.

In April last year, the FDA approved the targeted drug Pemigatinib for the treatment of advanced/metastatic or unresectable FGFR2 gene fusion/rearranged cholangiocarcinoma in adults who have received previous treatment.

Infigratinib is an orally administered, ATP-competitive, FGFR tyrosine kinase inhibitor that has been approved for the treatment of FGFR2 fusion-driven cholangiocarcinoma patients.

Currently, clinical studies of the drug for the first-line treatment of cholangiocarcinoma and urothelial cancer (bladder cancer) are underway.

This approval is based on a single-arm Phase 2 study that enrolled 108 previously treated, unresectable, locally advanced or metastatic cholangiocarcinoma patients with FGFR2 fusions or rearrangements. At the time of enrollment, 99% (107) of the patients had metastatic (stage IV) cholangiocarcinoma.

These 108 adult patients with cholangiocarcinoma received 125 mg of Infigratinib orally for 21 days, every 28 days as a cycle, until unacceptable toxicity or disease progression. At the same time, all patients received the oral phosphorus-binding agent Sevelamer hydrochloride (Sevelamer) for prevention.

The results announced at the Gastrointestinal Cancer Symposium of the American Society of Clinical Oncology in 2021 showed that:

Patients in the Infigratinib treatment group achieved an objective response rate (ORR) of 23% and a median duration of response (DOR) of 5 months. Among them, of the 23 responders, 8 patients maintained sustained remission for more than 6 months.

The approval of Infigratinib has brought important new options for targeted therapy for patients with advanced cholangiocarcinoma, allowing more patients to expect to prolong survival and improve their quality of life.