The study was carried out in patients with both chronic kidney disease (CKD) and type 2 diabetes (T2D), and evaluated the efficacy and safety of finerenone (BAY 94-8862) and placebo.

The results showed that the study reached the primary endpoint: when combined with standard care, finerenone significantly reduced the incidence of first cardiovascular (CV) deaths or non-fatal CV events (myocardial infarction, stroke, heart failure hospitalization) compared with placebo Compound risk. The detailed data of the study will be announced at an upcoming medical conference.

FIGARO-DKD is the second positive phase 3 study in the phase 3 clinical program of finerenone for the treatment of CKD and T2D patients. Compared with FIDELIO-DKD, the first positive phase 3 study in the project, the FIGARO-DKD study enrolled more patients with early-stage CKD and T2D. The previously published FIDELIO-DKD study showed that when combined with standard care, finerenone significantly reduced the risk of the composite primary endpoint of CKD progression, renal failure, and renal death compared with placebo.

Professor Luis M. Ruilope of the Department of Public Health and Preventive Medicine of the Autonomous University of Madrid, Spain, said: “Up to 40% of patients with type 2 diabetes will develop chronic kidney disease, and they are very likely to have cardiovascular events. And progress to renal failure. The FIGARO-DKD study provides important insights into the potential impact of finerenone on cardiovascular outcomes in patients with chronic kidney disease and type 2 diabetes.”

Dr. Christian Rommel, Member of the Executive Committee and Head of R&D of Bayer Pharmaceuticals, said: “With the positive results of the FIGARO-DKD study at the composite primary endpoint, by completing the largest CKD and T2D phase III clinical trial project to date covering a wide range of disease severity, We have achieved an important milestone in the clinical development of finerenone. We are very pleased to see that the data from the FIGARO-DKD study further supports the evidence generated by the FIDELIO-DKD study, reducing cardiovascular deaths and non-fatal cardiovascular deaths in patients with CKD and T2D Compound risk of event or outcome.” 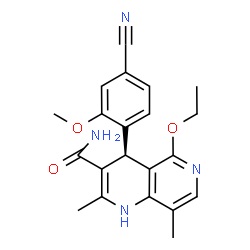 Chronic kidney disease (CKD) is one of the most common complications of diabetes and an independent risk factor for cardiovascular disease. In all patients with type 2 diabetes, approximately 40% of patients will develop CKD. CKD is the main cause of end-stage renal disease and renal failure. In the advanced stage, patients may require dialysis or kidney transplantation to survive.

At present, Finerenone is undergoing review by US, EU, and Chinese regulatory agencies. It is worth mentioning that finerenone is the first non-steroidal selective mineralocorticoid receptor antagonist (MRA) that has been proven to reduce the risk of renal and cardiovascular events in patients with T2D and CKD. Although progress has been made in recent years, many patients with CKD and T2D are still moving towards end-stage renal failure or premature death. The mechanism of action of finerenone is different from current treatments. If approved, the drug can slow the progression of the disease by directly targeting inflammation and fibrosis (the main drivers of CKD progression). 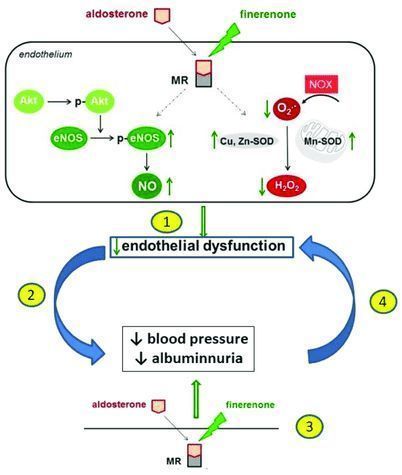 The finerenone phase III clinical project is the largest CKD combined T2D phase III clinical project to date. The project consists of 2 studies and enrolled 13,000 T2D patients with widespread CKD disease from all over the world, including patients with early renal damage and more advanced renal disease. This project aims to evaluate the effects of finerenone and placebo in combination with standard care on the prognosis of kidney and cardiovascular (CV).

Finerenone’s regulatory application documents are based on the positive data of the FIDELIO-DKD study. The results of the test were announced at Kidney Week Reimagined 2020 (ASN) and published in the New England Journal of Medicine (NEJM) in October 2020. See: Effect of Finerenone on Chronic Kidney Disease Outcomes in Type 2 Diabetes. 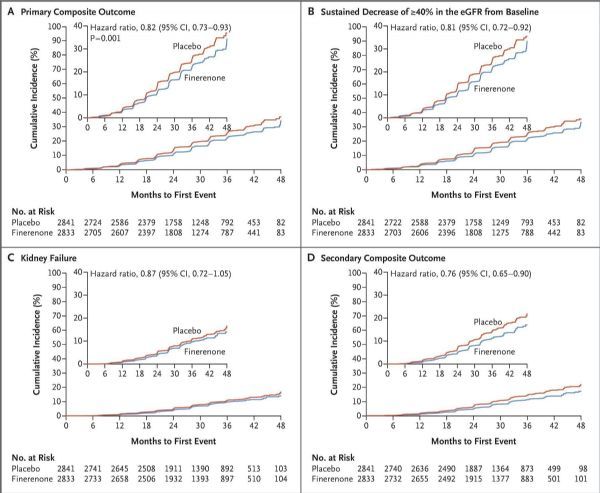 The results showed that the study reached the primary endpoint: when combined with standard care, finerenone significantly reduced the risk of the composite primary endpoint of CKD progression, renal failure, and renal death compared with placebo. Specifically, with a median follow-up of 2.6 years, compared with placebo, finerenone will experience renal failure for the first time, the estimated glomerular filtration rate (eGFR) will continue to decrease from baseline by ≥40% for at least 4 weeks, and renal The compound risk of death was significantly reduced by 18% (HR=0.82; 95%CI: 0.73-0.93; p=0.0014). At 36 months, the number of treatments needed to prevent a primary composite endpoint event was 29 (95% CI: 16-166).

In addition, the study results showed that in the pre-specified subgroups, the effect of finerenone on the main results was generally consistent, and the treatment effect was sustained throughout the study period. With a median follow-up of 2.6 years, compared with placebo, finerenone also significantly reduced the risk of key secondary endpoints: a 14% reduction in the combined risk of cardiovascular death, non-fatal myocardial infarction, non-fatal stroke, or length of stay in hospital for heart failure ( The relative risk was reduced, HR=0.86 [95%CI: 0.75-0.99; p=0.0339]).