The Swedish biopharmaceutical company Calliditas Therapeutics recently announced that the U.S. Food and Drug Administration (FDA) has accepted the New Drug Application (NDA) of Nefecon (budesonide) and granted priority review, which is a new oral formulation of budesonide.

The drug is an IgA1 down-regulator, which treats IgA nephropathy (IgAN) by targeted down-regulation of IgA1. The FDA has designated the NDA’s “Prescription Drug User Fees Act” (PUDFA) target date as September 15, 2021.

If approved, Nefecon will become the first therapy specifically designed and approved for the treatment of IgAN, with disease correction potential.

After obtaining approval, Calliditas intends to commercialize Nefecon alone in the United States.

We look forward to working with the agency to obtain accelerated approval later this year. So that we can provide the first approved drug for IgAN patients.” 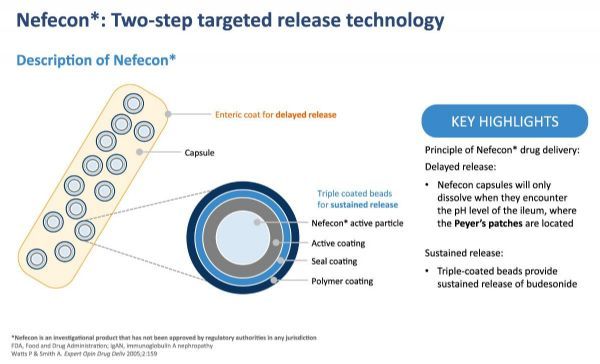 According to the main pathogenesis model, the preparation is designed to deliver drugs to the Peyer’s patch in the lower small intestine where the disease originated.

Nefecon is derived from TARGIT technology, which allows substances to pass through the stomach and intestines without being absorbed, and can only be released in pulses when they reach the lower part of the small intestine.

As shown in the large Phase 2b trial completed by Calliditas, the combination of dose and optimized release profile is effective for IgAN patients.

This means that high-concentration drugs can be applied locally where needed, but systemic exposure and side effects are very limited. 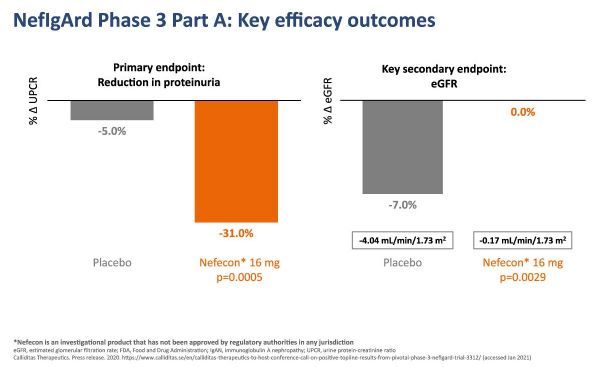 Calliditas is the only company that has obtained positive data in phase 2b and phase 3 randomized, double-blind, placebo-controlled clinical trials of IgAN.

Both trials reached the primary and key secondary endpoints.

The Nefecon NDA submission is based on the positive data from part A of the key phase 3 study of NefIgArd.

This is a randomized, double-blind, placebo-controlled, international multicenter study designed to evaluate the efficacy and safety of Nefecon and placebo in 200 adult IgAN patients.

As mentioned earlier, compared with placebo, the study reached the primary endpoint of reducing proteinuria and showed that eGFR was stable at 9 months.

The submitted information also includes clinical data from the NEFIGAN Phase 2 trial, which also reached the primary and secondary endpoints of the NefIgArd study.

Both trials showed that Nefecon was generally well tolerated, and the results of the two groups had similar safety.

Calliditas has applied for accelerated approval. Accelerated approval is a new drug approval channel of the US FDA, allowing drugs that have the potential to solve the unmet medical needs of major diseases to be approved based on a surrogate endpoint.

The surrogate endpoint of the key phase 3 trial NefIgArd is the reduction of proteinuria compared to placebo, which was based on the statistical framework of clinical research meta-analysis published by Thompson A et al. in 2019 for interventions in IgAN patients in clinical studies. stand by.

A confirmatory study designed to provide long-term kidney benefit data has been fully enrolled and is expected to be announced in early 2023.