Enhertu is the first ADC therapy approved for the treatment of HER2-positive gastric cancer, which significantly prolongs patient survival compared to nursing care.

The EMA Committee on Medicinal Products for Human Use (CHMP) has initiated a scientific review of Enhertu’s application for the aforementioned new indications. Enhertu was developed by Daiichi Sankyo in cooperation with AstraZeneca .

The prognosis of gastric cancer is poor, especially in the advanced stages of the disease, when only 5%-10% of patients survive for 5 years. About one-fifth of gastric cancers are considered HER2 positive. The recommended first-line treatment for HER2-positive advanced or metastatic gastric cancer is a combination of chemotherapy and trastuzumab (HER2-targeted monoclonal antibody). Although the benefits of HER2 targeted therapy in the treatment of first-line metastatic gastric cancer have been fully confirmed, the disease will eventually progress, and second-line treatment options are limited, and new HER2 targeted therapies are urgently needed.

Enhertu is the first ADC drug approved to treat HER2-positive gastric cancer. The drug was approved in Japan and the United States in September 2020 and January 2021, respectively, for the treatment of patients with HER2-positive metastatic stomach or GEJ adenocarcinoma.

It is worth mentioning that Enhertu is the first to show that patients with HER2-positive metastatic gastric cancer who have previously received chemotherapy and anti-HER2 therapy have significantly prolonged overall survival compared with chemotherapy (Results of the DESTINY-Gastric02 trial, median OS: 12.5 months vs 8.4 months) HER2 targeted therapy.

Based on the convincing and strong efficacy in clinical trials , Enhertu will become the new standard of care for clinical treatment of such patients.

DESTINY-Gastric01 is an open-label, randomized phase 2 trial that enrolled 187 (including 149 cases in Japan) HER2-positive advanced gastric cancer or gastroesophageal junction adenocarcinoma (defined as: IHC3+ or IHC2+/ISH+) patients who had previously Received 2 or more regimens (including 5-FU, platinum-containing chemotherapy, trastuzumab) but the disease progressed.

In the study, patients were randomly assigned at a ratio of 2:1 and received Enhertu (6.4 mg/kg) or chemotherapy (paclitaxel or irinotecan monotherapy) selected by the research investigator, once every three weeks.

DESTINY-Gastric02 is the first trial that specifically evaluates Enhertu in the treatment of Western gastric cancer patients. Data show that in patients with HER2-positive metastatic and/or unresectable gastric or gastroesophageal junction (GEJ) adenocarcinoma who have previously been treated with a trastuzumab regimen, Enhertu treatment provides clinically meaningful and durable The tumor is in remission.

The data released at the ESMO conference in 2021 showed that in the preliminary analysis, the overall response rate (ORR) of Enhertu (6.4 mg/kg) confirmed by the independent center review (ICR ) was 38% . 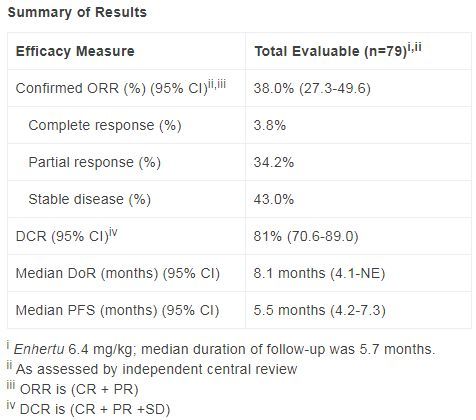 Gastric cancer is the fifth most common cancer in the world and the fourth leading cause of cancer deaths. The 5-year survival rate for patients with advanced or metastatic disease is only 5%-10%.

In 2020, there will be approximately 1 million new cases of gastric cancer and 768,000 deaths worldwide.

About one-fifth of stomach cancers are HER2 positive. HER2 is a tyrosine kinase receptor growth-promoting protein that is expressed on the surface of many types of tumor cells, including breast cancer , gastric cancer, lung cancer and colorectal cancer. HER2 overexpression may be related to changes in a specific HER2 gene called HER2 amplification.

Trastuzumab is an anti-HER2 drug, which has been proven to improve patient survival when combined with chemotherapy.

Related to the poor prognosis. For patients with metastatic gastric cancer, if progress occurs after the initial treatment with trastuzumab-based regimens, treatment options are limited, and there are no other HER2 targeted drugs available in many parts of the world. 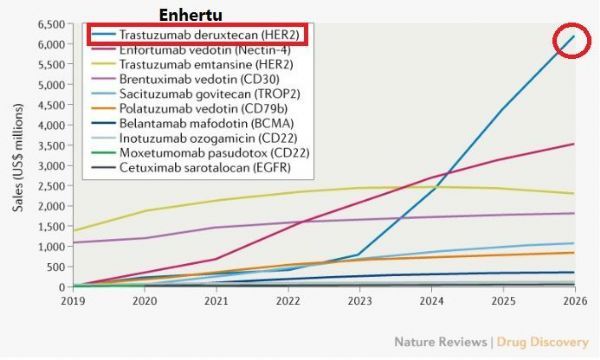 Enhertu is a new generation of antibody-drug conjugate (ADC) that combines humanized HER2 monoclonal antibody trastuzumab (trastuzumab) with a new topoisomerase 1 through a 4-peptide linker.

In March 2019, AstraZeneca and Daiichi San total reached an immuno- oncology collaboration worth up to 6.9 billion U.S. dollars to jointly develop Enhertu for the treatment of cancer patients with various HER2 expression levels or HER2 mutations, including gastric cancer , Colorectal cancer, lung cancer, and breast cancer with low HER2 expression.

According to the agreement, the two parties will jointly develop and commercialize Enhertu on a global scale. Daiichi Sankyo will retain the exclusive rights to the Japanese market and will be solely responsible for manufacturing and supply.

Up to now, Enhertu has been approved for 2 indications:

(1) for the treatment of adult patients with HER2-positive metastatic breast cancer who have received two or more anti-HER2 drugs in metastatic disease;

(2) use For the treatment of adult patients with locally advanced or metastatic HER2-positive gastric or gastroesophageal junction (GEJ) adenocarcinoma.

The industry is very optimistic about Enhertu’s business prospects. In March of this year, the journal Nature Reviews Drug Discovery published an article (The oncology market for antibody-drug conjugates), pointing out that the global market for antibody-drug conjugates (ADC) is expected to be on the market by 2026 At over 16.4 billion U.S. dollars, Enhertu will rank first with sales of 6.2 billion U.S. dollars.