The HER2 targeting antibody conjugate (ADC) Enhertu (fam-trastuzumab deruxtecan, DS-8201) jointly developed by AstraZeneca and Daiichi Sankyo was recently approved by the U.S. Food and Drug Administration (FDA) for a new indication for the treatment of HER2-positive metastatic gastric or gastroesophageal junction (GEJ) adenocarcinoma patients. 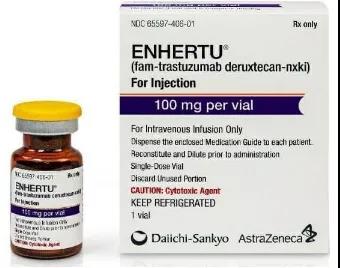 In the United States, there are more than 27,000 new cases of gastric cancer each year, and about one-fifth of the patients are HER2 positive. Before Enhertu was approved, there were no other approved HER2 targeted drugs for patients with metastatic gastric cancer who had progressed after initially receiving an anti-HER2 drug.

Enhertu is the first and only one to show a significantly prolonged overall survival (median OS: 12.5 months vs 8.4 months) in patients with HER2-positive metastatic gastric cancer who have previously received chemotherapy and anti-HER2 therapy compared with chemotherapy HER2 targeted therapy. Based on the convincing and strong efficacy in clinical trials, Enhertu will become the new standard of care for clinical treatment of such patients.

Enhertu is developed globally by Daiichi Sankyo Pharmaceuticals and AstraZeneca, and Daiichi Sankyo reserves Japanese rights. In September 2020, Enhertu was approved in Japan for the treatment of patients with HER2-positive unresectable advanced or recurrent gastric cancer. Previously, Enhertu has been granted SAKIGAKE (innovative drug) qualification for the treatment of HER2-positive gastric cancer by MHLW.

Enhertu’s gastric cancer indications in the United States and Japan are approved based on the results of the open-label, randomized Phase 2 DESTINY-Gastric01 trial. The trial enrolled 187 patients (including 149 in Japan) HER2-positive advanced gastric cancer or gastroesophageal junction adenocarcinoma (defined as: IHC3+ or IHC2+/ISH+) patients who had previously received 2 or more regimens (including 5- FU, platinum-containing chemotherapy, trastuzumab) but the disease progressed.

In the study, patients were randomly assigned at a ratio of 2:1 and received Enhertu (6.4 mg/kg) or chemotherapy (paclitaxel or irinotecan monotherapy) selected by the research investigator, once every three weeks.

In this trial, the safety and tolerability of Enhertu are consistent with previously reported Enhertu trials. Of the 125 patients (including 99 Japanese patients) treated with Enhertu, 122 (97.6%) had drug-related adverse reactions.

The most common adverse reactions are:

Enhertu (trastuzumab deruxtecan, DS-8201) is a new generation of antibody-drug conjugate (ADC) that combines humanized HER2 monoclonal antibody trastuzumab (trastuzumab) with a 4-peptide linker. A new type of topoisomerase 1 inhibitor exatecan derivative (DX-8951 derivative, DXd) is linked together, which can target delivery of cytotoxic agents to cancer cells. Compared with usual chemotherapy, it can reduce cytotoxic agents Full body exposure.

In March 2019, AstraZeneca and Daiichi San total reached an immuno-oncology collaboration worth up to 6.9 billion U.S. dollars to jointly develop Enhertu for the treatment of cancer patients with various HER2 expression levels or HER2 mutations, including gastric cancer , Colorectal cancer and lung cancer, and breast cancer with low HER2 expression. According to the agreement, the two parties will jointly develop and commercialize Enhertu on a global scale. Daiichi Sankyo will retain the exclusive rights to the Japanese market and will be solely responsible for manufacturing and supply.

(1) For the treatment of patients with metastatic non-small cell lung cancer (NSCLC) whose disease progresses during or after receiving platinum-containing chemotherapy and has HER2 mutation in the tumor;

(2) For the treatment of HER2-positive, unresectable or metastatic gastric or gastroesophageal junction adenocarcinoma patients who have previously received at least 2 regimens (including trastuzumab);

(3) For the treatment of patients with HER2-positive metastatic breast cancer, the treatment indication was approved in December 2019.

The industry is very optimistic about Enhertu’s business prospects. EvaluatePharma, a pharmaceutical market research organization, previously predicted that Enhertu’s sales in 2024 are expected to reach US$2 billion.