Talking about the preparation process of mRNA vaccine

Talking about the preparation process of mRNA vaccine.  A COVID-19 epidemic in 2020 has promoted and witnessed the majestic momentum of mRNA vaccine latecomers. As a rising star, the short R&D cycle, high safety, high accuracy, and high flexibility of mRNA vaccines occupy an absolute advantage compared with traditional vaccines.

With the marketing of mRNA vaccines, its production process is gradually becoming mature. The specific preparation process flow chart is roughly shown in Figure 1.

The DNA preparation process is quite sophisticated compared to mRNA. It is like Cytiva’s classic three-step plasmid method, which has high versatility, strong robustness, and can be fully amplified, which is a good plasmid preparation process. The emerging technology RCA (Rolling Circle Amplification) prepares linear plasmids (shown in Figure 2), simplifying the complex. The process does not require the participation of cells at all, thus eliminating the process of fermentation, expression, harvesting, and purification of E. coli, shortening the process time of 7 to 8 days to 1 to 2 days, greatly improving work efficiency. 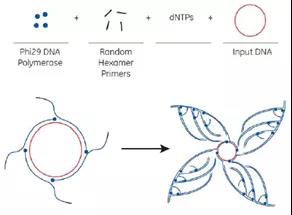 2) In vitro transcription and capping reaction of mRNA

The in vitro transcription and capping reaction process of mRNA is safer and faster than most other vaccine production methods, but the raw materials it relies on are relatively expensive. In vitro transcription of RNA generally uses plasmid DNA or other DNA fragments containing the open reading frame of the target protein as a template, adding nucleoside triphosphates (adenine, guanine, cytosine, uracil) that provide nucleotide bases, and RNA polymerization Enzymes, ribonuclease inhibitors, pyrophosphatase (degrading pyrophosphate to prevent transcriptional inhibition), magnesium ions (as a cofactor for polymerase), and buffers containing antioxidants and polyamines. At present, the in vitro transcription process is mass-produced under GMP conditions. It must be said that it is still a big challenge. How to ensure that the added raw materials are of no animal origin and reach the GMP level, and how to ensure the accessibility of these raw materials are issues that we need to pay attention to. 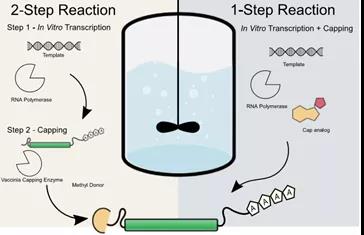 Figure 3. In vitro transcription of RNA

The capture process after mRNA in vitro transcription or the capture process after capping has been relatively clear.
Sera-Mag Oligo (dT) magnetic beads (Cytiva) can bind to mRNA poly A tails with high specificity to capture mRNA. The load can reach 12 ug mRNA/ml, and the yield is above 90% (Figure 4). However, for large-scale GMP production, due to the operation process and cost, the amplification application of magnetic beads is relatively limited.

CIMmultus Oligo dT (BIA separations) can also capture mRNA efficiently by combining with poly A tail, and has high flow rate (retention time is about 1 min), low shear force, loading capacity up to 180 ug/ml, and the yield of this step is as high as More than 95% (Figure 5). 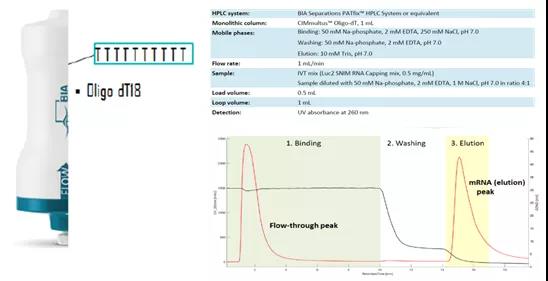 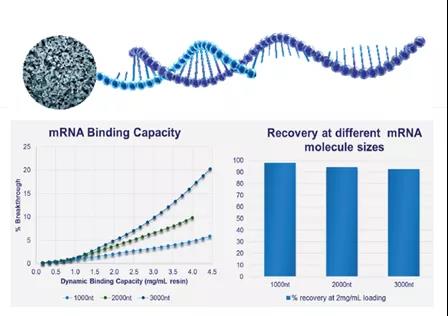 After the high-specific capture step, the hollow fiber liquid replacement step can usually be connected to replace the buffer while removing impurities such as small nucleic acid fragments. The effect is more significant for large RNAs, generally achieving a high yield of 90%-95%, and even a high purity of 99%, while retaining the stability and effect of the purified RNA.
For some impurity-challenging projects, CIMmultus PrismaS has both anion exchange and hydrophobic effects. Under pH gradient elution conditions, DNA, residual proteins, and dsRNA can be effectively separated from the target ssRNA. Impurities will precede The ssRNA is eluted. If a step of high salt (such as 1 M NaCl) elution is added before pH elution, it will be more conducive to the removal of dsRNA, DNA and protein. 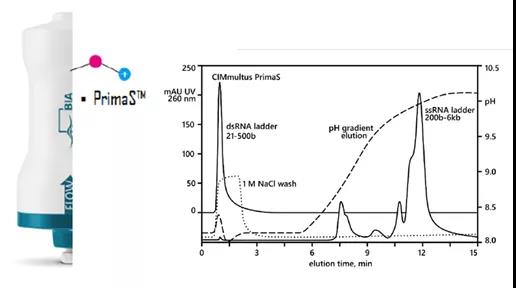 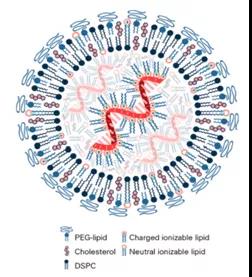 In summary, there is still a long way to go to build a mature, robust and economical mRNA vaccine preparation process platform.