What are Key Points of mRNA vaccine technology and production?

2) development of simple, rapid and large-scale methods for the production of mRNA;

Considering that the 5’and 3’untranslated regions (UTRs) of mRNA can significantly affect the translation rate and half-life of transcripts, optimizing UTRs is very important for mRNA vaccine design. A recent study used a systemic selection process based on cell culture to identify new UTRs, which significantly increased the protein expression of IVT mRNA.

The study identified several 3’UTR sequences. Compared with the human β-globin 3’UTR, these sequences can induce the relevant transcript to produce approximately 3 times the protein. The new 3’UTR motifs have been validated in mRNA vaccination and gene reprogramming studies, and they induce a more effective therapeutic effect than the mRNA of β-globin 3’UTR.

In addition, an interesting new vaccine form has recently been reported, showing great efficacy without delivery materials. This method uses the mRNA encoding the alpha virus RNA-dependent RNA polymerase plus the second mRNA encoding the antigen to enable it to replicate in the cytoplasm. This system can effectively induce a protective immune response in mice at a very low dose (50ng).

These findings are particularly attractive because the use of low doses reduces the cost of vaccine production. The absence of delivery materials further reduces costs, simplifies manufacturing, and increases the possibility of vaccine freeze-drying and storage at ambient temperature. 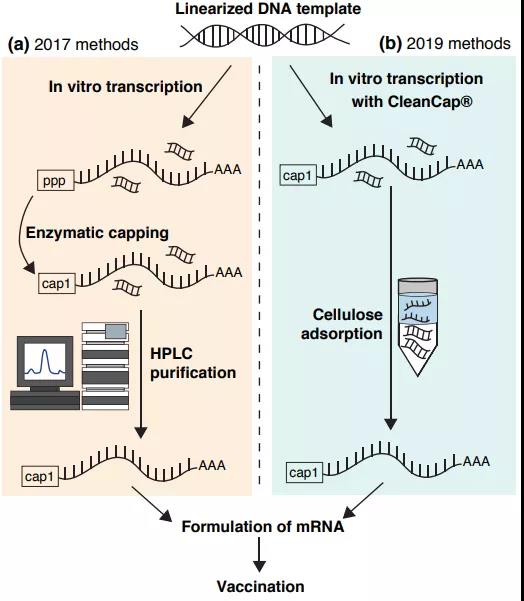 The second innovation provides an attractive alternative to high-performance liquid chromatography purification, which can be used in laboratory and industrial-scale production. This is a simple method to purify mRNA by adsorbing double-stranded RNA contaminants to cellulose, a cheap and abundant polysaccharide. Studies have proved that this highly scalable and inexpensive method is as effective as high-performance liquid chromatography for removing dsRNA contaminants in IVT mRNA samples.

Cell penetrating peptides (CPPs) are rarely used in mRNA vaccines, but there have been some recent advances in this area: CPPs containing amphiphilic Arg-Ala-Leu-Ala motifs have been developed to condense mRNA into a form that can destroy and penetrate Membrane-permeable particles, and after immunization of mice, show a powerful killer T cell response.

Lipid nanoparticles (LNPs) are currently the most widely used mRNA carrier materials, and several clinical trials using mRNA LNP are currently underway (NCT03076385 and NCT0334343). In these experiments, the nucleoside modified mRNA-LNP influenza vaccine induced a humoral immune response in the subjects, and the safety of the vaccine was comparable to that of the inactivated influenza vaccine. Compared with preclinical studies, the degree and durability of the immune response are relatively small and need to be improved.

It is worth noting that the above-mentioned clinical trials started a few years ago, and there are currently more effective LNP preparations. Similar to the polymer-based CART platform, mRNA-LNPs also achieve selective T cell targeting. A new platform, called ASSET (anchored secondary targeting single chain antibody), in which T cell-specific monoclonal antibodies are linked to LNP to target T cells. This flexible platform also has great potential in mRNA vaccines and other applications.

Another lipid complex preferentially targets dendritic cells after systemic administration. The use of mRNA vaccines to selectively target DCs to induce a strong immune response is a potentially key discovery, and this platform has proven its promise in clinical trials.

In the past few years, extremely important progress has been made in the field of mRNA vaccines, and has provided evidence for the feasibility of this new vaccine model. New manufacturing methods and delivery materials will facilitate the rapid and inexpensive mass production of next-generation mRNA vaccines.