mRNA vaccine production: challenges and bottlenecks.  The development of preventive vaccines against infectious pathogens is the key to controlling and preventing large-scale outbreaks of epidemics.

in the face of acute outbreaks of infectious diseases, such as the new coronavirus, the development and production cycle of traditional vaccines is too long to meet the needs of epidemic control. We need a more effective and universal vaccine development platform, and mRNA vaccines are a potential solution to break the game.

The discovery of the central law confirms that RNA plays an important role as a bridge between DNA and protein. As early as the 1990s, scientists injected in vitro transcribed mRNA into mice, and found that it can be expressed in mice, produce related proteins, which are dose-dependent, and can induce immune responses. This is the embryonic form of mRNA vaccines. Therefore, when the mRNA encoding the antigen protein is injected into the human body, the antigen protein can be synthesized in the body, thereby causing the human immune response to fight pathogen infection, which is an mRNA vaccine.

The production of mRNA vaccines uses Escherichia coli to express DNA, and then polymerizes the DNA into this mRNA. The cost of the enzyme synthesis in the intermediate operation is very high. It needs 2,000 yuan per unit in China and US$450 per unit abroad. Secondly, mRNA will be degraded quickly in the body. This process has many risks. It has to protect RNA and be absorbed by cells. It is very difficult to be non-toxic.

Eukaryotic mRNA has a 5’cap and 3’poly A tail. Prokaryotes do not have such a head-to-tail structure. That is, the main sequence of mature mRNA is the coding region, and there are non-coding regions on its upstream 5’side and downstream. There are also 5’caps and 3’tail structures at both ends of eukaryotic mRNA molecules. The mRNA of prokaryotic cells generally does not have a tail, but the viral mRNA that infects eukaryotic cells generally has a tail.

Vectors based on lipids or lipid compounds (lipidoids) represent the most commonly used non-viral vectors. Various synthetic and naturally derived lipids have been used to form liposomes or lipid nanoparticles (LNPs), both of which have been reported to be effective in delivering mRNA-based vaccines. Among them, LNP is currently the most widely used in the field of nucleic acid medicine. A wide range of delivery types. Because it is easily absorbed by antigen-presenting cells, it is most commonly used in vaccines. At present, the three major mRNA vaccine giants, Moderna, CureVac and BioNTech, all use LNP delivery technology. However, the delivery efficiency of LNP is not high in the application of gene therapy in vivo.

Although these delivery vectors have been widely used in the basic research and clinical research of gene therapy and mRNA vaccines, in the specific subdivision of gene editing technologies such as CRISPR, their clinical application has double standards of safety and effectiveness. The safety issues and the efficiency challenges of non-viral vectors such as LNP make the delivery system still need to be further developed and explored.

There is also a new delivery method including the use of cationic cell penetrating peptides (CPP) and anionic peptides. The CPPs system has been proven to improve the T cell immune response in vivo, regulate the innate immune response and enhance protein expression in DC and human cancer cells in vitro. The mRNA polymer conjugated to an anionic peptide showed an increase in cellular uptake without inducing the cytotoxicity of DC cells.

The production of mRNA vaccines is usually divided into the following steps: preparation of pDNA, in vitro transcription, preparation of mRNA, sterile filtration/preparation. Compared with conventional vaccines, one of the most important advantages of mRNA is its relatively simple manufacturing method. In order to produce mRNA products with specific quality attributes, a series of production steps must be performed. Some combinations are also feasible. These can be divided into upstream processing (including enzymatic production of mRNA) and downstream processing (including the unit operations required to purify mRNA products). These are complementary to the LNP formulation and filling to completion steps. Nevertheless, the choice of unit operation still depends on the purpose. For example, laboratory-scale production usually includes a one-step synthesis reaction, followed by nuclease digestion and precipitation. The exact unit operation used may affect the manufacturing price and cost per dose. Ultimately, the cost will be greatly affected by the amount of RNA per dose, the production titer, and the scale of production used. The 5’cap simulation and the purchase price of the modified UTP seem to have an impact on the cost. 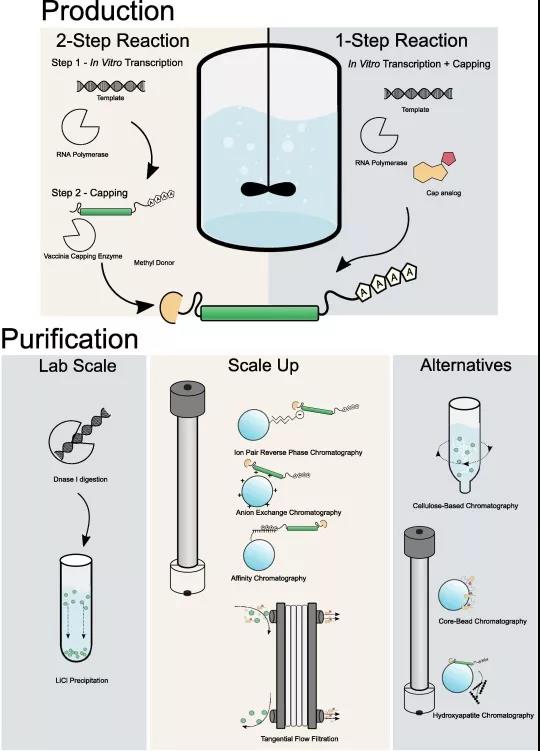 Since mRNA vaccine is a non-infectious, non-integrated platform technology, there is no potential risk of infection or insertion mutation. In addition, mRNA can be naturally degraded by normal cells, and its half-life in the body can be adjusted by various modifications and delivery systems. At the same time, the inherent immunogenicity of mRNA can be artificially down-regulated to further increase its safety.

Various modifications make the mRNA more stable and easier to translate. By synthesizing mRNA into a carrier molecule, allowing it to be quickly taken up and expressed in the cytoplasm, efficient in vivo administration can be achieved. mRNA is the smallest genetic carrier, so anti-carrier immunity is avoided and mRNA vaccines can be repeated.
(3) Large-scale production and low cost: mRNA vaccines have the potential for rapid, cheap and scalable production, mainly derived from the high efficiency of in vitro production of IVT mRNA.

The future can be expected

What we need to do in the future is to improve the current IVT mRNA production method to commercialize mRNA technology and support market demand. Since the process yield and production scale will affect the manufacturing cost, and thus the cost per dose, we speculate that continuous processing will have a special advantage in reducing costs. Continuous processing has been used in the chemical and pharmaceutical industries to run flexible and cost-effective processes that will eventually be produced on demand.

In addition, process integration through continuous manufacturing can also reduce operating time and promote automation and process analysis technology (PAT), which can increase productivity and product quality. The relative simplicity of mRNA manufacturing makes this process very suitable for continuous processing, especially on the microfluidic scale (see above). On this scale, the reaction speed can be accelerated under specific conditions, the use of expensive reagents can be minimized, and cascade reactions can be easily divided.

In addition, in-situ product removal (ISPR) and substrate feed and product recovery (SFPR) strategies can be implemented on-site to facilitate process control, recycling and reuse of compounds. These strategies will allow separation of molecules that can be recycled in the process, such as enzymes (if free enzymes are used), cofactors or NTPs. For this, different unit operations can be used, such as TFF, aqueous two-phase system (ATPS) or precipitation. These will potentially reduce the burden of downstream processing and overall processing costs.

In addition, the proposed system can be combined with a microfluidic formulation step in which mRNA is encapsulated in lipid nanoparticles (LNP). This will allow the establishment of continuous mRNA processing until the filling step is completed.

Due to the lack of mature and cost-effective processes, downstream processing and filling from start to finish are still the main bottlenecks in the production of mRNA vaccines. Despite efforts to develop methods that can achieve high purity products, most methods are combined with traditional precipitation or nuclease digestion techniques. Moreover, most methods are not cost-effective, which makes the method unable to meet market demand.

Other cost-effective technologies that can be applied in continuous mode, such as single-pass tangential flow filtration (SPTFF) or aqueous two-phase systems (ATPS), can potentially improve processing time and manufacturing flexibility while reducing costs and maintenance costs . In addition, the new chromatographic operation mode can overcome the need for multiple mRNA purification steps (see figure above). For example, the use of multimodal chromatography is very promising because the combination of interactions between molecules and matrix can lead to an integrated and enhanced purification process without the need for multiple chromatographic steps.

mRNA is a rising star in the field of biopharmaceuticals. Compared with conventional methods, the interest in this new vaccine comes from the flexibility, safety and accuracy of these vaccines. Increasing numbers of cancer treatment and infectious disease clinical trials indicate that the industry is increasingly interested in putting these types of vaccines on the market. The mRNA vaccine is accurate, safe and flexible, and can be easily produced on a large scale for clinical-level applications. These vaccines can serve as the answer to the rapid response to pandemics in production.

However, in order to achieve this goal, the development of sustainable and cost-effective manufacturing processes must be addressed. Although the mRNA IVT response is safer and faster than most established vaccine production methods, it relies on the use of expensive and limited quantities of materials.

The downstream processing of vaccines is still poorly established, and it relies on methods that lack scalability and cost-effectiveness. Moving the process to continuous production can overcome these bottlenecks. A microfluidic method is currently under investigation, which separates the enzymatic reactions and combines in-situ product removal (ISPR), substrate feed and product recovery (SDPR) modules, and the use of multimodal chromatography instead Use multiple chromatographic steps (see figure above).

The use of new production methods that allow the reuse and recycling of compounds used in a continuous production process in combination with high-throughput purification and well-defined analytical methods may be one of the solutions for sustainable, flexible and cost-effective vaccine production One of the Tao.