Prospects and challenges of mRNA vaccine delivery.  In 1990, scientists injected in vitro transcribed messenger RNA-mRNA into mice. Through testing, they found that it can express activity in mice and produce related proteins in a dose-dependent manner. This method of directly injecting mRNA can produce an immune response by expressing specific proteins. This is the embryonic form of mRNA therapy.

Compared with peptide vaccines, mRNA tumor vaccines are more advantageous in terms of coverage, cost, effectiveness, and safety, opening a new chapter for tumor treatment. At present, mRNA tumor vaccines are one of the mainstream research directions of tumor vaccines. It has passed on The exons of the patient population are sequenced and compared with the normal population to predict the neoantigen, and then mRNA is prepared based on the obtained neoantigen sequence and delivered to the cell to translate the specific antigen.

The picture below shows the mRNA vaccine currently under development 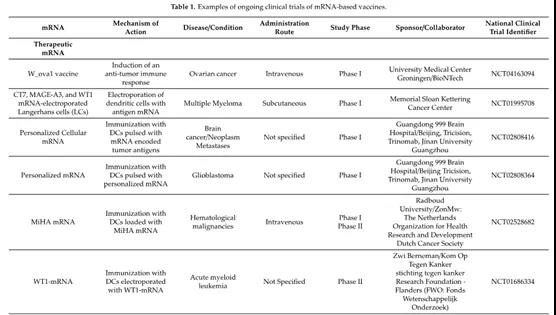 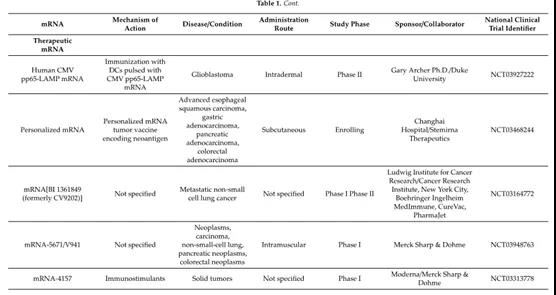 In subsequent studies, although animal experiments have shown that mRNA can play a role similar to vaccines to achieve therapeutic goals. However, due to technical limitations at the time, there were bottlenecks in mRNA stability, drug delivery, and safety. This therapy gradually became colder, and more researchers turned to the field of DNA and alternative proteins.

A research team from the Department of Pharmacy, School of Health and Medicine, University of Copenhagen, Denmark, published an article specifically describing the opportunities, challenges and prospects of mRNA vaccine delivery.

At the beginning, they compared mRNA vaccines with DNA vaccines. The technical challenge associated with DNA vaccines was to ensure delivery to the nucleus, transcription of the antigen before nuclear export, and conversion into proteins in the cytoplasm. In addition, DNA vaccines also have a potential risk of integration into the host genome, which may lead to insertional mutations. In contrast, mRNA vaccines only target cytoplasmic delivery, avoiding the risk of genome integration. In addition, mRNA can be produced in a cell-free environment through in vitro transcription (IVT), thereby avoiding the use of microorganisms or cultured cells for production, and avoiding related quality and safety issues in production. This allows simple downstream purification and fast and cost-effective manufacturing.

Through the basic pharmacology of mRNA vaccines, they pointed out that in vitro transcription (IVT) mRNA is used in therapy because it mimics the fully mature native mRNA present in the nuclear cytosol. It is achieved by transferring or directly delivering IVT mRNA in the body to the cytosol. These methods have been explored as genome engineering, gene reprogramming, T cell and dendritic cell (DC)-based immunotherapy for cancer and infectious diseases, tolerance therapy to treat allergies, and protein replacement therapy. 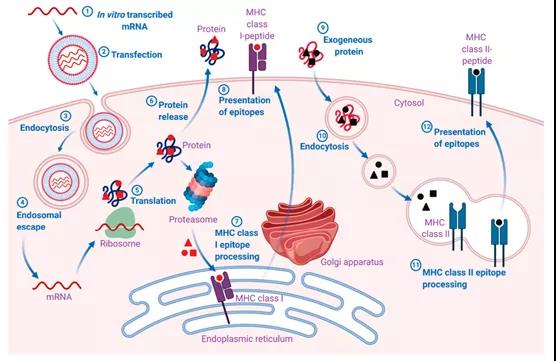 The figure above describes the mechanism of action of the mRNA vaccine.

1. mRNA is transcribed in vitro (IVT) from a DNA template in a cell-free system;

4. The trapped mRNA undergoes endothelial escape and is released into the cytosol;

6. Alternatively, the protein is secreted from the host cell;

7. The antigen protein is degraded by the protein in the cytoplasm. The generated antigen peptide epitope is transported to the endoplasmic retina and loaded into the major histocompatibility complex (MHC) class I molecule (MHC I);

8. The loaded MHC I-peptide epitope complex is presented on the cell surface, which ultimately leads to the induction of antigen-specific CD8 T cell responses after T cell receptor recognition and appropriate combined stimulation;

9. Exogenous protein is occupied by DCs.

11. The generated antigen peptide epitope is then loaded onto the MHC II molecule;

12. The loaded MHC II-peptide epitope complex is presented on the cell surface, leading to the induction of an antigen-specific CD4 T cell response. Exogenous antigens can also be processed and loaded onto MHC class I molecules through a mechanism called cross-expression (not shown in the figure).

Due to the unstable nature of mRNA, progress in the field of mRNA is slow, which makes experiments with unmodified mRNA very challenging, unless the precautions for handling mRNA are strictly followed. In contrast, DNA-based drugs are more stable than RNA. In a cell-free system, mRNA can be synthesized by IVT of a DNA template (for example, a linearized plasmid or PCR product), which encodes all structural elements of a functional mRNA. In order to perform the IVT reaction DNA template, RNA polymerase and nucleotide building blocks. In the subsequent mRNA purification process, the DNA template is usually degraded by adding DNase, and then purified by other conventional methods of separating mRNA, such as precipitation and chromatography. This process produces high-purity mRNA products that can be used immediately.

The scientific research team pointed out that they have adopted several strategies to deal with the inherent lack of stability and potential immunogenicity of mRNA. They believe that despite the potential potential of mRNA-based vaccines, effective intracellular delivery of mRNA to the cytoplasm still constitutes a major obstacle, especially for mRNA administered systemically. The large molecular weight (105–106 Da) and high negative charge density of mRNA will impair the penetration of mRNA on the cell membrane. In order to improve the delivery of RNA, various strategies have been studied, including improved injection strategies, such as microinjection, RNA patching, gene gun-based administration, protamine condensation, RNA adjuvants and RNA in lipids and/ Or encapsulation in nanoparticles composed of polymers. Generally, IVT mRNA for cytoplasmic delivery is formulated with a delivery system by mixing with a complexing agent that can protect mRNA from rapid degradation and promote cellular uptake.

The delivery of mRNA can be mediated by viral and non-viral vectors. Non-viral vectors can be further classified into lipid-based delivery systems, polymer delivery systems, and lipopolymer hybrid systems. For the delivery of viral RNA, people are more interested in the engineering of nucleic acid cargo carried by adenovirus. Transgenic viruses are commonly used for mRNA/gene delivery. The genes of these viruses are partially or completely replaced by model or therapeutic genes. One benefit of RNA viruses is that they replicate and express locally in the cytoplasm. Positive-stranded RNA viruses are distinguished by their genome sequence, which can be directly converted into the host ribosomal protein of interest.

Researchers also introduced some other carriers: polymer carriers, lipid-based carriers, lipid-polymer hybrid nanoparticles, and peptide-based carriers. Especially with regard to cell-specific mRNA delivery, researchers believe that the delivery of cell-specific mRNA will benefit the development of mRNA-based therapeutic methods. This can enhance the delivery of mRNA molecules to targeted cells, thereby reducing the required mRNA dose and reducing potential off-target effects. According to reports, lymphoid organs can be located by adjusting the net charge of the formula. This is based on the principle that APC is near the T cells of these organs, which provides the best conditions for effectively initiating and amplifying the T cell response. The site-specific delivery of mRNA-loaded nanoparticles through active targeting has been shown to produce potent agents and memory T cell responses, and mediate the strong IFN-α-dependent rejection of progressive tumors observed with RNA.

The therapeutic area based on mRNA ranges from protein replacement therapy and gene editing to vaccination. As there are currently dozens of mRNA-based vaccine candidates in the preclinical and clinical development stages, it is clear that mRNA-based vaccine technology is promising for the development of new therapeutic and preventive vaccines against infectious diseases and cancer. However, various obstacles related to the large size, charge, inherent instability of mRNA, and high susceptibility to enzymatic degradation have hindered the transformation of mRNA-based therapeutics from scientific research to clinical practice.

Therefore, the wide application of mRNA-based therapeutic methods is still limited by the demand for improved carriers or drug delivery systems. Advanced delivery systems can be applied to overcome the low stability, cell localization and transformation efficiency of naked mRNA. However, many clinically tested mRNA vaccine candidates are formulated without any delivery system, which indicates the need to further improve the delivery system of mRNA vaccines.

Currently, lipids and lipid-based nanoparticles are mainly used to deliver mRNA. In addition, polymer and lipopolymer hybrid nanoparticles are also promising in terms of safety, stability, high transmission efficiency and low price. Continue to advance the use of different nanomaterials for mRNA formulation and delivery, which can improve the widespread use of mRNA in the treatment and prevention of infectious diseases and cancer.