Vaccines are one of the greatest advances in the medical field, and they are also an important means of disease prevention and treatment.

They play an important role in the prevention and control of infectious diseases. Since the smallpox vaccine in 1798 and the rabies vaccine in 1885, vaccine technology has evolved from the use of inactivated and attenuated pathogens to the use of subunits containing only pathogen components that can trigger an immune response.

Traditional attenuated and inactivated vaccines are still widely used (such as BCG and inactivated polio vaccines). However, due to the use of all pathogens, they have a greater safety risk, and usually they have no clear ingredients. As far as toxoid vaccines and subunit vaccines are concerned, although they have good safety and stability, adjuvants are needed to generate a strong immune response, and the protection time is limited (Table 1).

Because there is no standardized production process, the traditional vaccine development is usually a long, challenging and expensive process. In addition, the SARS and Ebola epidemics and the COVID-19 pandemic have shown that traditional technology platforms are not suitable for responding to public safety emergencies quickly and efficiently.

Viral vector and DNA technology are two cutting-edge technology platforms, which are characterized by rapid development and flexibility in production processes.

However, the production cost of viral vector vaccines is high, the ingredients are complex, the protection rate is low, and there are potential safety risks. The poor immunogenicity of DNA vaccines and the risk of gene integration safety (Table 1) limit its clinical use. widely used.

Some unique technical advantages of mRNA make it very promising to become a substitute for traditional vaccines and even DNA vaccines. Unlike attenuated or inactivated vaccines, mRNA only expresses specific antigens and induces an immune response in a targeted manner.

In addition, it promotes humoral and cellular immune responses and induces the innate immune system.

Compared with DNA vaccines, mRNA is safer and more effective, because expression does not need to enter the nucleus, and the probability of random genome integration is almost zero; in addition, mRNA will be degraded in the cell in a short period of time (2-3 days).

The mRNA vaccine encoding different antigens will not affect the physicochemical properties of the main structure of the mRNA, which is conducive to the use of standardized production.

Since mRNA production is based on an in vitro cell-free transcription reaction system, there are no safety risks such as cell-derived impurities and viral contaminants that are common in other vaccine production.

In addition, the development cycle of mRNA vaccines is short and broad-spectrum. From January 2020, when Chinese scientists announced the gene sequence of the new coronavirus, to December the FDA approved BioNTech’s emergency use of BNT162b2, there was only less than one year.

Currently, mRNA vaccines are being developed for a variety of infectious diseases, such as HIV, rabies virus, influenza, Ebola, Plasmodium, and respiratory syncytial virus (RSV).

The structure of the mRNA vaccine is similar to that of eukaryotic mRNA. A single-stranded molecule has a cap structure (Cap) at the 5″ end, a Poly(A) tail at the 3″ end, and an open reading frame (ORF) with a non-indicating structure on both sides. Translation area (UTR). 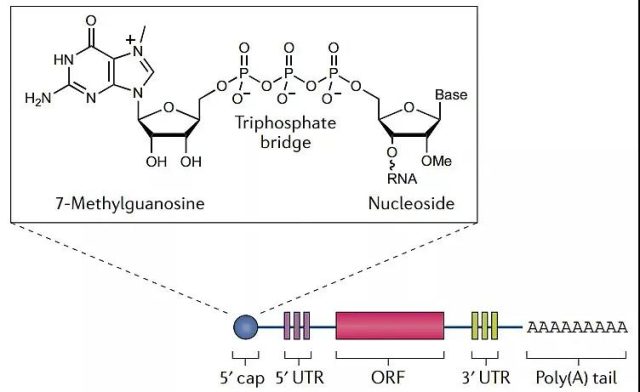 5″Cap is a very important structure of mRNA vaccines. It combines with eukaryotic translation initiation factor (eIF4E) to initiate translation.

In addition, 5″Cap prevents exonuclease degradation and promotes the formation of mRNA circularization.

Space and structure enhance stability. Different degrees of methylation can form three types of caps: CAP 0 type, Cap 1 type and Cap 2 type. The 3’UTR tail is a Poly A sequence, which is similar to the cap structure. The Poly(A) tail can also protect mRNA from being degraded by exonuclease.

Poly A is also involved in translation and its regulation process. Polyadenylic acid-binding protein (PABP) binds to form a circular complex and participates in the initiation of translation. Untranslated regions (UTR) affect transcriptional regulation and mRNA stability, and these regions strongly affect translation efficiency.

Strategies to regulate the innate immune response, such as the introduction of unnatural nucleosides (NTPs), and codon optimization to improve translation efficiency, are also commonly used in mRNA vaccines.

CureVac’s mRNA vaccine CVnCoV uses unmodified natural mRNA to change the mRNA sequence and optimize the codons through its RNActive platform to improve the stability and immunogenicity of the mRNA.

5″Cap, Poly A tails and the 5ʹ and 3ʹUTR elements on both sides of the coding sequence profoundly affect the stability and translation of mRNA. These are the key issues of vaccines. The stability and immune efficacy of mRNA vaccines can be greatly increased through engineering. 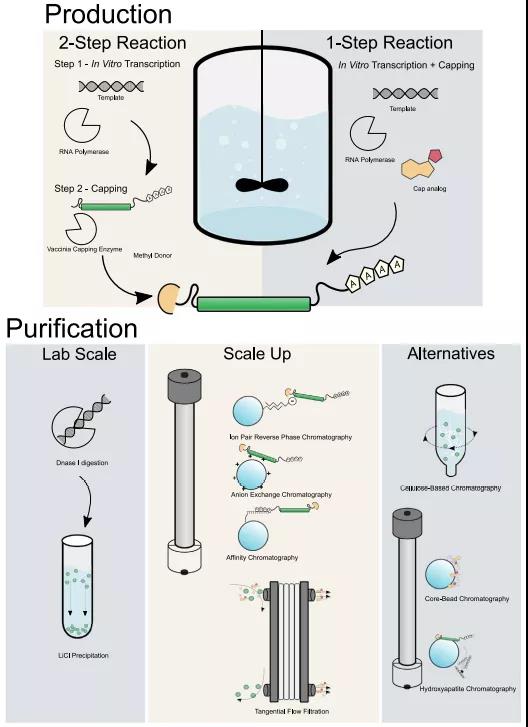 Transcription: The upstream is mainly based on the plasmid as a template and is transcribed into primary mRNA under the action of T7, SP6 or T3 RNA polymerase.

The reaction only takes a few hours. Usually, milligrams of initial mRNA can be obtained per milliliter of reaction.

Capping: Capping of the initial mRNA can be achieved by replacing the guanosine triphosphate (GTP) substrate with a Cap analog during the transcription reaction.

Alternatively, vaccinia capping enzyme (VCC) and methyl donor can be used as substrates for capping in the second enzymatic reaction (Figure 4).

Compared with capping with Cap analogs (60–80%), although the second method has higher capping efficiency (up to 100%), the capping process with cap analogs is faster and does not require two-step enzymatic reaction.

However, due to price reasons, Cap analogs may have an impact on production costs, especially in the case of large-scale manufacturing.

4). The reaction mixture contains not only the desired mRNA, but also many impurities such as enzymes, residual NTP and DNA template, as well as abnormal mRNA formed during transcription (such as ds mRNA).

Olig dT affinity chromatography can bind to the poly-A tail present in mRNA. It is often used to capture mRNA and obtain high-purity products. It can be purified and produced on a large scale, but it has the disadvantages of low binding capacity and low efficiency.

The current production process (such as in vitro transcription process) is difficult to meet the needs of large-scale commercialization in the future, and the continuous flow production mode is the future development direction and has the unique advantage of low cost.

The continuous flow production mode has been used in the chemical and pharmaceutical industries and is flexible and cost-effective.

At this scale, the reaction speed can be accelerated under certain conditions, and the cost of expensive reagents (such as vaccinia capping enzyme, methyltransferase, etc.) can be minimized.

In addition, immediate substrate feeding and product harvesting strategies can be implemented in the process to facilitate process control, recycling, and material reuse.

The production capacity and quality of the plasmid used as the starting template in the mRNA production process is a very critical factor, and it is also a bottleneck restricting the production of mRNA vaccines.

For mRNA production, plasmid DNA must be used as a template for transcription into initial mRNA.

Therefore, controlling the quality of the plasmid template at the source is very important for the effectiveness of the mRNA vaccine.

Plasmids, as the key raw material for mRNA production, need to be under good manufacturing practices (cGMP) conditions and a robust process. Pharmaceutical research materials, including master cell banks, need to be provided during clinical trial approval (Investigational New Drug, referred to as IND) applications.

As well as working cell banks, plasmid DNA production processes, etc., when preparing engineered bacterial banks for the production of plasmid DNA, it is also necessary to follow the principles of cGMP practice and refer to the guidelines for corresponding testing.