Only 15% of patients have limited disease at the time of diagnosis, and the 5-year survival rate can reach 50%.

Standardized and orderly diagnosis, staging, and the development of a multidisciplinary treatment (comprehensive treatment) plan based on the clinical behavior of lung cancer can provide patients with the best possible cure or effective remission.

With the progress of comprehensive treatment based on surgery, chemotherapy and radiotherapy, the overall 5-year survival rate of lung cancer has almost doubled in the past 30 years.

Recently, another group of scientists discovered a molecular mechanism that can bring hope to the treatment of lung cancer…

Lung cancer is a malignant disease. Therefore, once suffering from lung cancer, it will bring great harm to the health of patients.

For example, the occurrence of lung cancer will affect the health of the bronchus; Cancer cells spread and metastasize throughout the body, easily spread to important organs such as the brain or liver, which can cause liver dysfunction.

Once the organs are damaged too much, it will make it difficult to maintain a normal life, which can be life-threatening; If the cancer is not controlled, it will continue to expand and it may invade the patient’s pleura

This can lead to chest pain and pleural fluid. When the pleural effusion is too much, it can compress the lungs and make the patient’s dyspnea symptoms more serious. Therefore, early detection and treatment of lung cancer should be achieved in order to strive for the best prognosis.

However, lung cancer is difficult to detect and difficult to treat because the markers of this disease are also present in other tissues. Now, scientists at the University of Illinois at Urbana-Champaign have developed a fine-tuned molecular formulation that can target lungs and other cancer cells for imaging and treatment.

They published the results of this research in an article titled “Photoacoustic imaging of elevated glutathione in models of lung cancer for companion diagnostic applications” in the journal Nature Chemistry: 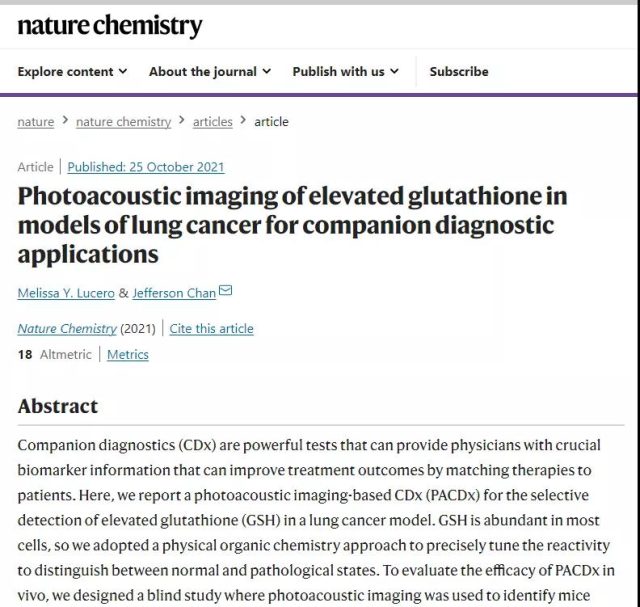 In this study, scientists described and explained the ability of this molecule to target lung cancer cells, imaging and targeting them in human cancer cell lines and living mouse petri dishes. In their experiment, they chose an unexpected biomarker as the research target: glutathione.

Glutathione is a molecule that is naturally produced in various tissues of the human body, but its expression in lung cancer is greater. They explained: “Due to the universality of glutathione, it has not been a good target for chemotherapy and other treatments.”

Jefferson Chan, professor of chemistry at the University of Illinois, and graduate student Melissa Lucero conducted this experiment and research together.

He said: “One of the biggest problems that need to be faced when developing diagnostic tools or targeted drugs is the off-target effect. When you give patients chemotherapy, This is like an arms race: because you are killing cancer cells, you are actually killing other parts of the body, because many things are similar.

We use a unique chemical method to adjust us The reactivity of the molecules, so our target is usually considered to be a very typical bad biomarker.”

The researchers adjusted the dynamic range of the molecule so that it would not react to glutathione in a healthy environment, but would react with excess glutathione produced by cancer cells.

They paired their targeting molecule with a photoacoustic imaging agent so they can see where it reacts and verify that it targets lung cancer.

The imaging agent reacts to the light and emits a sound signal that can be received by the ultrasonic transducer.

Chan said: “This is a technology in which light enters and sound comes out. Compared with traditional medical imaging, this technology has many advantages.

This imaging technology is powerful because of its high-quality resolution, safety, and compatibility with these. The ability to design molecular interactions, at the molecular level, it can convey a lot of information to us.

In the hospital, handheld and laparoscopic optical equipment can be seamlessly synthesized with ultrasound equipment, so we know that when we develop this It will have a role in clinical applications.” The researchers first tested the imaging ability of this new molecule in a cell culture dish and found that healthy cells can be clearly distinguished from cancer cells.

To assess the diagnostic potential, they conducted a blind study on live mice, using photoacoustic probes to determine which mice in the cohort had lung cancer tumors. Lucero said: “This research marks the first successful application of this technique of photoacoustic imaging to lung tissue.” Then, the researchers explored whether their targeting method can be used to deliver treatment directly to the site of cancer cells.

It will eliminate the biggest disadvantage of chemotherapy and other cancer treatments: it is toxic to the entire body.

This is the side effect of many treatment methods when treating cancer patients, but this new type of targeted therapy can break through this obstacle and overcome this terrible side effect.

They created a prodrug, named the drug PARx, and combined their targeted imaging probe with a powerful chemotherapeutic drug and tested it in mice.

They found that PARx inhibited tumor growth, while the mice showed no signs or symptoms of off-target toxicity, such as weight loss or liver damage.

In contrast, during the three-week treatment period, the tumors of the group of mice that received the control group rather than the drug treatment grew significantly.

Lucero said: “We found that the use of high-dose or frequent doses of drugs does not produce off-target effects.

Subsequently, we did more experiments on other clinically relevant mouse models to find and treat cancers and primary liver metastases. Sexual tumors, which highlights the potential of this method for a wide range of applications.”

Next, they are working to further improve selectivity and detection capabilities so that they can detect micrometastasis anywhere in the body, or tiny clusters of cancer cells spreading.

They are also seeking to apply their methods to other biomarkers to create fine-tuned targeting molecules for other cancers.

Chan said: “When you target a deadly disease such as lung cancer, if you find that you have the disease at an early stage without symptoms, it can actually be cured.

This early diagnosis requires finding the right organism. Marker; now we have reached the initial success of diagnosing it.

There is also hope for treatment, because by using chemical means, we can combat the toxicity of these drugs, so that they can be safely used in the treatment of patients.”

New molecular mechanism is expected to be more effective for lung cancer!