Molecular mechanism of bone marrow regeneration after chemotherapy.  Chemotherapy often has a damaging effect on the hematopoietic stem and progenitor cells (HSPCs) in the bone marrow of the body. However, once the chemotherapy is terminated, HSPCs will regenerate , Up to now, researchers are not clear about the specific process and details.

Recently, in a research report published in the international journal Journal of Experimental Medicine, scientists from Osaka University and other institutions have identified the molecular mechanism of HSPCs recovery after injury.

HSPCs are located in the bone marrow and can produce many types of blood cells, such as red blood cells (can carry oxygen), certain white blood cells (important for the body’s immune system), and platelets (essential for blood clotting). Because HSPCs can continue to divide to produce new cells, they are particularly sensitive to induced damage, such as chemotherapy. Interestingly, HSPCs have the ability to regenerate after damage. 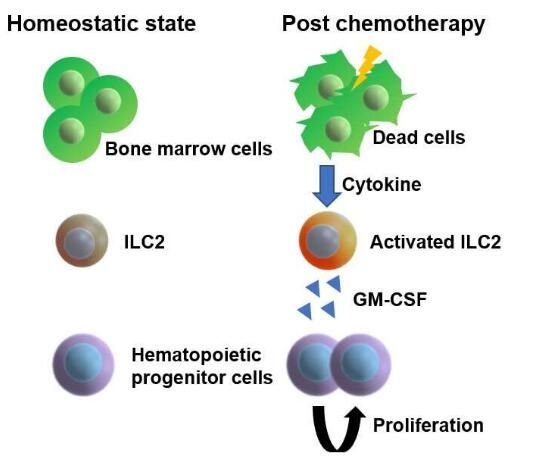 The corresponding author of the article, Professor Masaru Ishii, said that the bone marrow is a highly active organ because it has to continuously produce new blood cells. Once it loses its function, for example, during chemotherapy, such as anemia, neutropenia, and bleeding are fatal. Sexual conditions will occur; in this study, researchers want to understand how hematopoietic stem cells located in the bone marrow regenerate and fully restore their functions during chemotherapy-induced damage.

In order to achieve this goal, the researchers focused on a special subgroup of blood cells produced by HSPCs—ILC2s (group 2 innate lymphoid cells), when ILC2s exist in a variety of tissues. And when it plays an important role in the body’s immune system and tissue repair process, its residence in the bone marrow is considered to be a unique role due to its location; however, researchers do not know the nature of the function of ILC2s.

In order to clarify the biological role of ILC2s, the researchers used 5-fluorouracil (5-FU) to treat mice. This chemotherapeutic agent has a toxic effect on the HSPCs in the mouse body. Then the researchers will fresh and undamaged HSPCs. Infusion into these mice is similar to stem cell transplantation in leukemia patients. Interestingly, the researchers found that the damaged HSPC microenvironment in 5-fluorouracil-treated mice may promote transplantation. The proliferation of HSPCs; by analyzing the results of the study at the molecular level, the researchers found that ILC2 in the bone marrow of the treated mice can produce granulocyte macrophage stimulating factor (GM-CSF) to help the process of HSPC regeneration.

But how do ILCs know that GM-CSF should be produced in the late stage of bone marrow injury? In order to answer this question, the researchers expanded their focus and began investigating whether there are other cells or molecules that can guide ILC2 to produce GM-CSF.

They found that the progenitor cells of the antibody-producing B cells in the bone marrow can produce interleukin-33 after injury. (IL-33), thereby activating ILC2, which indicates that the repair of damaged bone marrow requires the participation of multiple molecules; importantly, the researchers revealed that the isolated ILC2 is transferred to the small group receiving 5-fluorouracil treatment.

The mouse body can accelerate the recovery of its hematopoietic process, while reducing ILC2 will produce the opposite result, which suggests that ILC2 may be used as a sensor for bone marrow injury in the body.