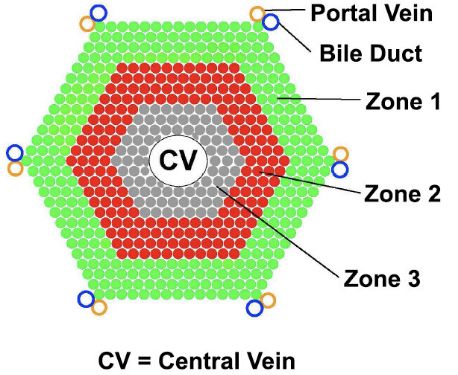 Although people have known since ancient times that the liver has an amazing ability to regenerate, the cells responsible for maintaining and replenishing the liver have always been a mystery. Now, researchers from the University of Texas Southwestern Medical Center have identified the cells responsible for liver maintenance and regeneration, and also pinpointed their location in the liver.

These findings may help scientists answer important questions about liver maintenance, liver damage (such as fatty liver or alcoholic liver disease), and liver cancer. The relevant research results were published in the Science Journal on February 26, 2021, with the title of the paper “Liver homeostasis is maintained by midlobular zone 2 hepatocytes”. The corresponding author of the paper is Dr. Hao Zhu, associate professor at the Children’s Institute of the University of Texas Southwestern Medical Center.

There are three areas in the liver lobule structure: area 1, area 2, and area 3. The picture is from UT Southwestern Medical Center.

The liver performs important functions, including chemical detoxification, blood protein production, bile excretion, and energy metabolism regulation. From the structural point of view, the liver is composed of tissue units called liver lobules, and the cross section resembles a honeycomb. Each liver lobule is organized into concentric areas, and hepatocytes (hepatocytes for short), as the main liver cell types, perform various functions in them. In the past 10 years, people have been debating whether all hepatocytes in the entire liver lobule or a certain subgroup of hepatocytes or stem cells are responsible for the production of new cells.

Due to the lack of markers to distinguish and compare the functions of different types of hepatocytes in different areas of the liver, previous efforts to identify the cells most responsible for liver regeneration have been hampered. In this new study, the Zhu laboratory solved this problem by comparing genes that mark liver cells in the entire liver. Using this method, they identified genes that are only turned on by specific liver cell subpopulations, and then used these genes as markers to distinguish the identities and functions of different liver cell subpopulations.

Zhu and his research team have bred 11 new mouse strains, each of which carries a marker for a specific liver cell subgroup. Together with the three previously established mouse strains, they observed how these labeled subpopulations of hepatocytes proliferate or disappear over time, and which cell subpopulations are responsible for liver regeneration after injury. These experiments allowed them to directly compare how different liver cell subpopulations are responsible for liver maintenance and regeneration.

Members of Zhu’s laboratory found that new hepatocytes produced by cells in zone 2 filled all three areas of the liver lobules (zone 1, zone 2, and zone 3), while cells in zone 1 and zone 3 Then disappeared. These unexpected observations indicate that there is no rare stem cell population responsible for maintaining the liver. On the contrary, in a specific area of ​​the liver, a common set of mature hepatocytes divide regularly to produce new hepatocytes throughout the liver. Zhu’s laboratory also exposed mice to chemicals that mimic common forms of liver damage, showing that cells in zone 2 can best escape death, regenerate liver cells, and maintain liver function.

Zhu said, “In humans, cells in Zone 1 and Zone 3 are most commonly damaged by alcohol, acetaminophen, and viral hepatitis. Therefore, it is understandable that cells in Zone 2 will not be affected by the liver. Toxic damage at both ends of the lobules, they will be in the primary position for liver regeneration. However, more research is needed to understand the different cell types in the human liver.”

In order to learn more about the mechanism by which hepatocytes in zone 2 are used to regenerate liver functions, members of the Zhu laboratory conducted genetic screening to find genes that are important for growth and regeneration. They found a pathway called the IGFBP2-mTOR-CCND1 axis, which is active in zone 2 but not so active in zones 1 and 3. When they removed the components of this pathway from the mice, the cells in the second zone no longer produced new hepatocytes, thus establishing that this was the mechanism that led to the regeneration of the cells in the second zone.

Zhu said, “Identifying the hepatocytes in zone 2 as a regenerative cell population answers some basic questions about liver biology and may have an important impact on liver diseases. In addition, we have constructed tools to study different types of hepatocytes. It can be used to study how different cells respond to liver damage or the genetic changes that lead to liver cancer.”