Japan stem cells study: the relationship between telomeres and stem cells.  Some studies report that stress shortens telomeres.  The 37 trillion cells that make up our body are constantly undergoing metabolism, and old cells are replaced by new ones. This article will introduce you to the relationship between telomeres and stem cells.

What is the key to longevity?

Others believe that too short telomere length will increase the risk of cancer, stroke and other diseases. In the field of preventive medicine, there is now a detection method that can determine the degree of aging and disease risk by detecting a person’s telomere length. Help improve the life of the future.

The other is the complete duplication of the ends of the chromosomes. It is responsible for the stability of the accurate replication and distribution of DNA to new cells during cell division. When the telomeres disappear from the tip, no more cell divisions, thus eliminating replication errors.

When telomeres become shorter, cell functions become weaker. For example, the ability to produce collagen, which is a source of skin elasticity, is reduced, leading to sagging skin and wrinkles. Nowadays, research on lengthening telomeres to delay aging and prevent diseases such as cancer and stroke is ongoing. 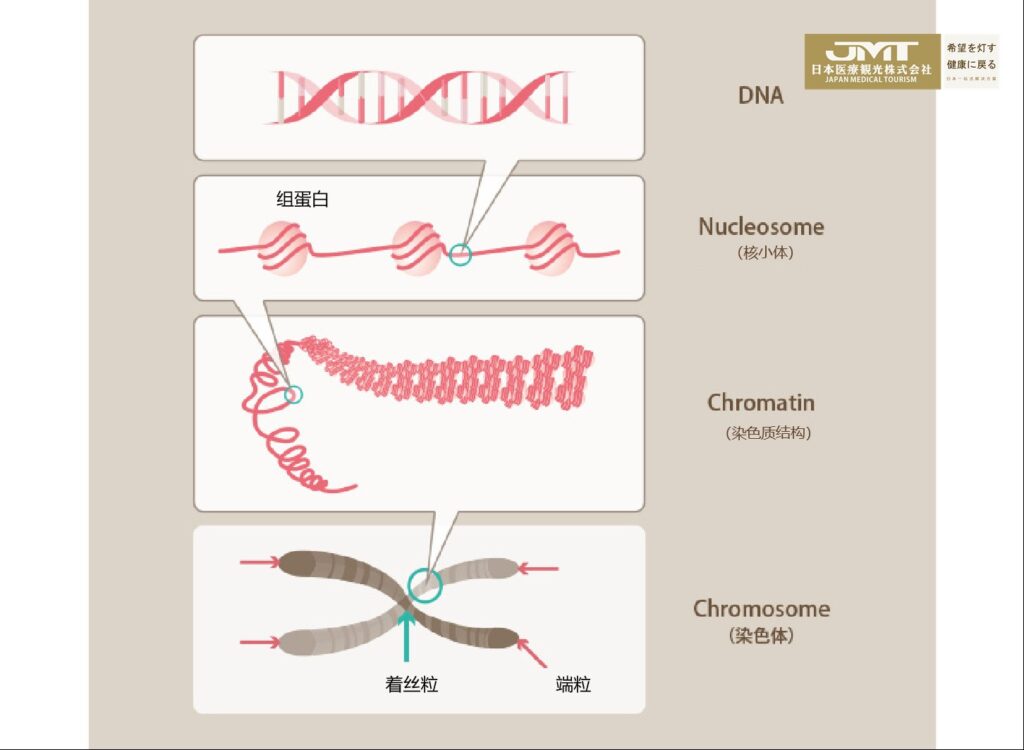 In 1985, people discovered an enzyme that can slow down or prolong the shortening of telomeres. This enzyme is called “telomerase”. Dr. Elizabeth-H-Blackburn and her colleagues who discovered this enzyme won the Nobel Prize in Physiology and Medicine in 2009.

Telomerase is an enzyme that prevents shortening of telomere length. As we all know, ES cells and iPS cells used in regenerative medicine can proliferate semi-permanently. This is because telomerase prevents telomeres from shortening and allows DNA to replicate no matter how many times it divides.

This telomerase does not work in ordinary cells, only in three types of cells. The three types are germ cells, stem cells (including ES cells and iPS cells), and cancer cells.

The three types of cells that make telomerase work

Now, we will explain to you the three types of cells that make telomerase work.

Germ cells refer to cells that are responsible for transmitting genetic information to the next generation during reproduction. In humans, they are eggs and sperm. In germ cells, telomerase activity is maintained at a high level, and DNA is permanently maintained at an almost constant length determined by the type of organism. In other words, we inherited almost the same length of DNA from our distant ancestors, which means that the species is preserved.

Somatic stem cells are cells that divide every day to make up for the cells lost due to metabolism. Somatic stem cells exist throughout the body and only divide into certain types of cells. ES cells, namely embryonic cells, and iPS cells are examples of such cells.

For example, hematopoietic stem cells in bone marrow will actively divide and grow into red blood cells, white blood cells and platelets. Because the role of telomerase is to restore shortened telomeres, a large amount of blood components can be produced every day. By the way, bone marrow transplantation, known as the treatment of leukemia, is to transplant these hematopoietic stem cells. “In this age of 100 years, I want to be younger and extend my healthy lifespan.”

Many people will have this hope. If you prevent telomeres from disappearing, can you achieve health and longevity by extending the length of telomeres?

An American experiment found a way to extend telomeres through daily life. This is “exercise”, “diet”, “sleep” and “interpersonal relationship”. Through aerobic exercise such as walking, eating a vegetable-based diet, at least 7 hours of sleep, and maintaining good relationships with friends and partners, the participants in the experiment increased their telomeres by an average of 10%*.

Instead, experiments were conducted to intentionally activate telomerase, but experiments with mice resulted in the formation of more cancer cells while the skin was regenerated. Therefore, artificially increased telomerase is a double-edged sword. In addition, some studies report that stress shortens telomeres.

It is expected that new discoveries about stem cells and telomeres will continue to emerge, such as the aforementioned telomerase inhibition to treat cancer.