In a new study, researchers from Singapore and the United Kingdom confirmed that the human signaling protein interleukin 11 (IL-11) has a damaging effect on human liver cells, which overturned the previous hypothesis that it can help paracetamol  poisoned and damaged liver.

This finding suggests that blocking IL-11 signaling may have the effect of repairing liver damage. The relevant research results were published in the journal Science Translational Medicine on June 9, 2021. The title of the paper is “Redefining IL11 as a regeneration-limiting hepatotoxin and therapeutic target in acetaminophen-induced liver injury”. 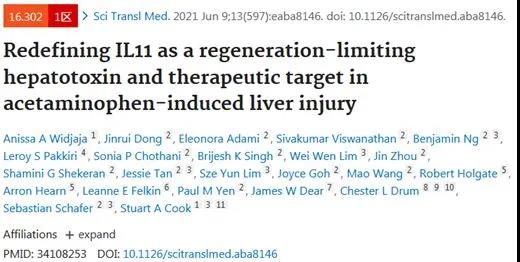 Paracetamol, also called acetaminophen, is a widely used over-the-counter pain reliever, and its overdose can cause severe liver damage and even death. It is the most common pharmaceutical preparation involving exposure to toxic substances in Singapore, and in the United Kingdom, 50,000 people appear in the emergency department due to paracetamol poisoning each year. If they use a drug called N-acetylcysteine ​​within 8 hours of an overdose, they can be treated. However, after a while, the only cure may be a liver transplant.

In order to find a cure for this condition, scientists have been conducting research on mice. Their investigations have shown that excessive amounts of paracetamol deplete the antioxidants in the liver. This leads to damage to mitochondrial proteins, triggering a chain of events that ultimately leads to liver damage and liver cell death. Further studies have shown that anti-IL11 treatment in the form of antibody drugs can not only reverse liver damage, but also support liver regeneration and promote the survival of mice with liver damage. This led to the idea that anti-IL11 therapy can help treat paracetamol poisoning in humans.

Anissa Widjaja, co-corresponding author of the paper and assistant professor of the cardiovascular and metabolic disease program at Duke-National University of Singapore School of Medicine, said, “We recently discovered that IL-11 is actually not conducive to a type of steatohepatitis, NASH) liver cell function in fatty liver. This makes us want to understand in more detail what happens in the mouse model of paracetamol toxicity.”

By using an animal model based on the National Laboratory Animal Research Advisory Committee (NACLAR) guidelines, they found that the level of IL-11 in the serum of a mouse model of paracetamol toxicity was high. Further investigation revealed that IL-11 is involved in activating the pathway leading to liver cell death. Surprisingly, they found that the liver of mice reacted differently depending on the administration of IL-11 to humans or mice. The human form of IL-11 has a protective effect on liver damage, while the mouse form of IL-11 causes liver cell death. When human IL-11 is administered to mice with paracetamol toxicity, it competes with mouse endogenous IL-11 and blocks its receptor. It is this blocking effect that protects mice from liver damage. IL-11 given to the same species is harmful because it does not cause this competition and the resulting blocking effect. 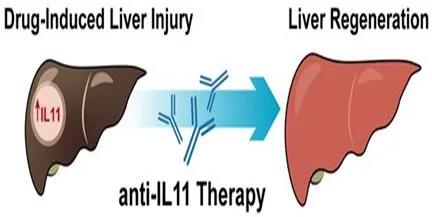 The co-corresponding author of the paper and Professor Stuart Cook of the Cardiovascular and Metabolic Disease Program at Duke-National University of Singapore School of Medicine said, “This means that IL-11 is actually a substance that is toxic to the liver. Blocking its cell receptors can help the liver regenerate after injury. This discovery may have an impact on liver failure caused by therapeutic drugs. If liver transplantation is not possible, this liver failure may lead to death.”

This research adds to more and more studies on IL-11, and Professor Cook is an authoritative expert who has been dedicated to studying this important signaling protein for many years. In 2017, he co-founded Enleofen Bio in Singapore, aiming to develop first-class antibody drugs for the treatment of human fibroinflammatory diseases. In 2019, as a world-leading pharmaceutical company for the treatment of fibrotic diseases and the development of therapeutic antibodies, Boehringer Ingelheim obtained the exclusive license of Enleofen’s anti-IL11 platform.

Professor Patrick Casey, Senior Associate Dean for Research at Duke-National University of Singapore, commented, “New insights from basic research enable scientists not only to test hypotheses, but also to make corrections when evidence overturns previous hypotheses. Professor Cook and him ‘S team is one of the leading experts in IL-11, and their latest findings have once again promoted our understanding in this field of research.”

The Cook team is now investigating whether IL-11 can hinder the regeneration of other organs, such as the kidney, and whether it participates in the loss of tissue function with age.