Nature: Innate lymphocytes have anti-tumor effects and can be combined with PD-1 inhibitors to enhance the effect of cancer treatment

Innate lymphocytes combine with PD-1 inhibitors to enhance cancer treatment.  UV exposure is the main risk factor for the development of melanoma. The regulation of melanoma growth and metastasis is mainly mediated by adaptive immune cells, especially tissue-resident memory T cells. Although the skin also contains other immune cell types, including innate lymphocytes (ILC), they are still largely ignored.

Type 2 innate lymphocytes (ILC2) are essential for maintaining tissue homeostasis. In cancer, ILC2s can have the functions of promoting tumorigenesis and anti-tumorogenesis at the same time. In both cases, the tumor-promoting or anti-tumor response is always related to the increase of eosinophil infiltration. However, there is increasing evidence that they may play a key role in promoting the anti-tumor response of melanoma.

However, little is known about the potential mechanisms of ILC2-dependent eosinophils to promote tumor and anti-tumor, and it is not known whether they are clinically relevant or targeted to improve the prognosis of patients.

On June 7, 2021, researchers from the Walter and Eliza Hall Institute of Medicine in Australia published a research paper titled Blockade of the co-inhibitory molecule PD-1 unleashes ILC2-dependent antitumor immunity in melanoma in the journal Nature Immunology.

The study found that high type 2 innate lymphocyte (ILC2) infiltration in human melanoma is associated with a good clinical prognosis, but tumor-infiltrating ILC2s express PD-1, which limits their intratumoral accumulation, proliferation and anti-tumor effects . By activating IL33-driven ILC2s, combined with PD-1 inhibitors, it can significantly increase the anti-tumor immune response and overcome the inhibition of ILC2s in tumors.

This study shows that type 2 innate lymphocytes (ILC2) is a key immune cell type involved in melanoma immunity, and it is proposed that the use of ILC2 function in combination with immune checkpoint inhibitors can be used as a potential anti-tumor immunotherapy. 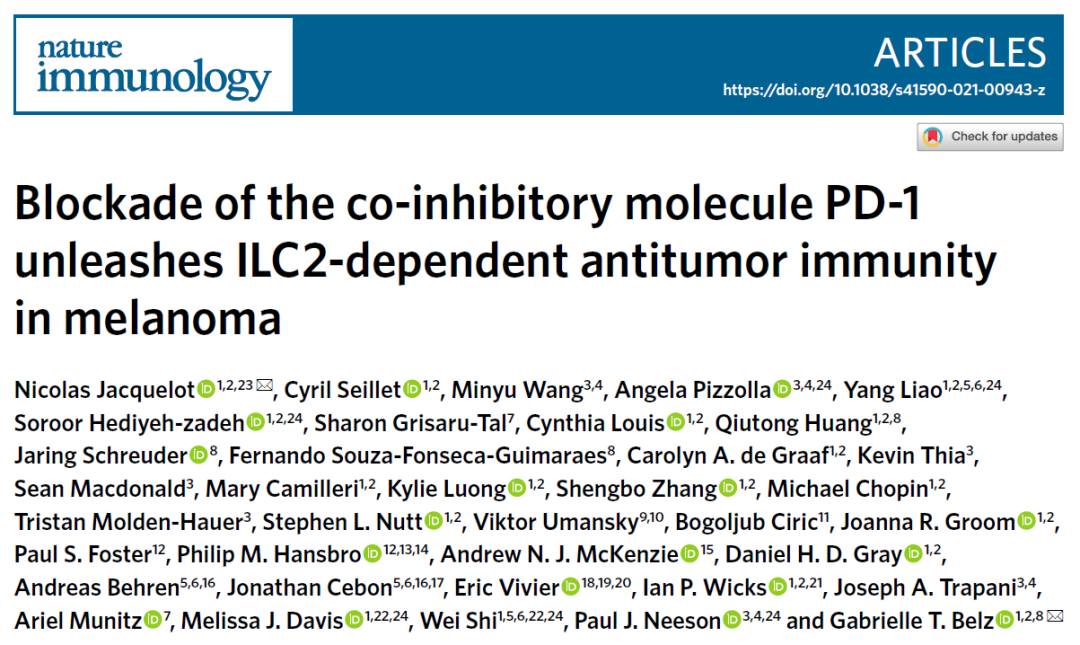 In order to study how innate lymphocytes (ILC) affect the formation of melanoma, the research team first constructed a mouse model that mimics human melanoma through gene editing or injecting tumor cells, and characterized ILC-infiltrating tumors growing in mice.

Next, the research team evaluated the role of immune cell subsets in anti-melanoma immunity. Compared with immune-preserving mice, immune-deficient mice lacking adaptive T and B lymphocytes have rapid tumor growth in vivo and poor survival rate of mice.

They then investigated whether this protection is driven by specific ILC subgroups. Knockout ILC2s gene mice eliminates the anti-tumor effect. Even in the absence of other innate or adaptive lymphocytes, ILC2s can mediate anti-tumor immunity, indicating that ILC2s mediates the effective anti-tumor response of melanoma.

In order to gain insight into the mechanism by which ILC2 forms an anti-tumor immune response, the research team performed single-cell RNA sequencing analysis on tumor-infiltrating leukocytes isolated from tumor mice. The results showed that ILC2s in tumors expressed higher levels of IL-13 and GM-CSF than ILC2s residing in the lungs.

In GM-CSF knockout mice, the growth rate and size of melanoma increased, which proved the role of GM-CSF in regulating the growth of melanoma.

Further studies have found that ILC2-derived GM-CSF is essential in the immune response to melanoma, which is a toxic response to tumor cells mediated by eosinophils.

Although ILC2 plays a role in inhibiting the formation of melanoma tumors, they do not continue to accumulate over time and exhibit reduced cytokine function.

In order to understand the mechanism that supports this conversion in ILC2, the research team mapped the immune checkpoint and costimulatory molecule expression in tumor-infiltrating ILC and T cells in the scRNA-seq data. The results showed that tumor-infiltrating ILC2s express Pdcd1, which encodes PD-1.

This suggests that anti-PD-1 based therapy may be effective in melanoma, so the research team used IL-33 or anti-PD-1 to treat model mice in vivo.

The results showed that IL-33 or anti-PD-1 reduced tumor growth rate and tumor size. However, compared with other treatment groups, the combined use of IL-33 and PD-1 inhibitors significantly enhanced the anti-tumor response.

In general, the results of this study indicate that tumor-infiltrating ILC2 provides a platform for secretion signals, cell recruitment and interaction between innate immune cells to exert anti-tumor functions. This study demonstrated that IL-33 activation doubled the production of ILC2 cytokines and enhanced PD-1 driven ILC2 inhibition.

The combination of IL-33 and PD-1 blockers increased tumor ILC2 and eosinophil recruitment and improved anti-tumor protection. This reveals a mechanism to improve the function of ILC2 and emphasizes that in this case, combined immune checkpoint blockade is another way to enhance the anti-tumor response.