How to design mRNA vaccine | What is the related carriers?

How to design mRNA vaccine | What is the related carriers?

Vaccines are the most effective public health intervention to prevent the spread of infectious diseases. Successful vaccination eradicates many life-threatening diseases such as smallpox and polio.

The World Health Organization estimates that vaccines can prevent 2 to 3 million deaths from tetanus, whooping cough, influenza and measles each year. However, despite the obvious success of conventional vaccines, they are not effective against pathogens such as Plasmodium, hepatitis C and HIV that evade immune surveillance.

In addition, they need to be modified regularly to deal with rapidly mutating pathogens, such as influenza viruses.

The mRNA-based nucleic acid vaccine was proposed more than 30 years ago, hoping to produce a safe, multifunctional, and easy-to-produce vaccine. mRNA vaccines have many advantages over traditional vaccines: unlike some viral vaccines, mRNA will not be integrated into the genome, thus avoiding the worry about insertion mutations; mRNA vaccines can be manufactured in a cell-free manner, thereby achieving rapid, economical, and efficient Production. In addition, a single mRNA vaccine can encode multiple antigens, enhance the immune response against adaptive pathogens, and can target multiple microorganisms or virus variants with a single formulation.

Initially, mRNA therapy was not paid attention to due to concerns about its stability, inefficiency and excessive immune stimulation. However, in the past ten years, the field of mRNA therapy has evolved with each passing day, including in-depth research in mRNA pharmacology, the development of effective vectors and the control of mRNA immunogenicity, which has brought the clinical application of mRNA vaccines into a new stage.

Design and synthesis of mRNA

In vitro transcription (IVT) mRNA mimics the structure of endogenous mRNA. There are five parts, from 5ʹ to 3ʹ including: 5ʹcap, 5ʹ untranslated region (UTR), an open reading frame encoding an antigen, 3ʹUTR and a PolyA tail. 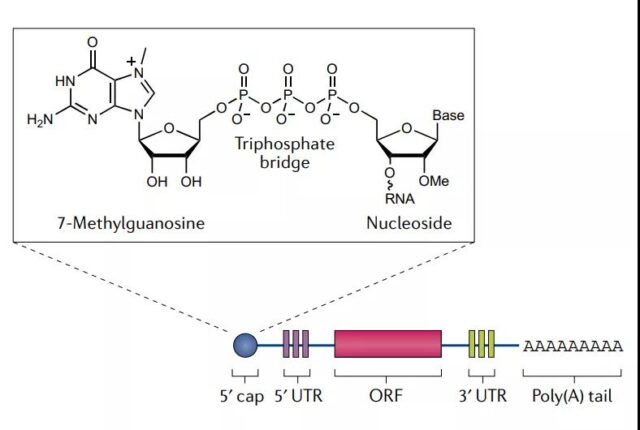 Like natural eukaryotic mRNAs, the 5’end cap structure contains a 7-methyl guanosine nucleoside, and the 5’end structure will sterically protect the mRNA from exonuclease degradation and work together with the translation initiation factor protein. , Recruiting ribosomes to initiate translation. The length of the PolyA tail indirectly regulates mRNA translation and half-life.

The 5’and 3’UTRs on both sides of the coding region regulate mRNA translation, half-life and subcellular localization. Natural UTRs from highly expressed genes (such as α- and β-globin genes) are the first choice for synthetic mRNAs. In addition, UTR can be optimized according to cell type, such as by removing miRNA binding sites and AU-rich regions in 3’UTR to minimize mRNA degradation.

To maximize translation, the mRNA sequence usually contains modified nucleosides, such as pseudouridine, N1-methylpseudouridine, or other nucleoside analogs. The use of modified nucleosides, especially modified uridine, prevents pattern recognition receptor recognition and ensures that sufficient levels of protein are produced during the translation process. Both Moderna and Pfizer–BioNTech SARS-CoV-2 vaccines contain nucleoside modifications. Another strategy to avoid pattern recognition receptor detection, pioneered by CureVac, uses sequence engineering and codon optimization to consume uridine by increasing the GC content of vaccine mRNA.

In addition to the improvement of mRNA sequence, significant progress has also been made in simplifying mRNA production. Synthetic mRNA used clinically is transcribed from DNA plasmids in vitro by using phage RNA polymerase T7 (T3 and SP6 polymerases can also be used). In addition, the use of CleanCap’s co-transcription capping technology simplifies the purification steps.

Because the mRNA is large (104–106Da) and negatively charged, it cannot pass through the anionic lipid bilayer of the cell membrane. In addition, in the body, it will be swallowed by cells of the innate immune system and degraded by nucleases. Therefore, in vivo applications require the use of mRNA delivery vehicles that transfect immune cells without causing toxicity or unnecessary immunogenicity. At present, many solutions based on innovative materials have been developed for this purpose.

Lipid nanoparticles are the most advanced mRNA carrier clinically. As of June 2021, all SARS-CoV-2 mRNA vaccines that are being developed or approved for clinical use use LNPs. LNP provides many benefits for mRNA delivery, including simple formulation, modularity, biocompatibility and larger mRNA payload capacity. In addition to RNA drugs, LNP usually includes four components, ionizable lipids, cholesterol, auxiliary phospholipids and PEGylated lipids, which together encapsulate and protect fragile mRNA.

Ionizable lipids and mRNA form nanoparticles in acidic buffer, which makes the lipids positively charged and attracts RNA. In addition, they are positively charged in the acidic environment of endosomes, which promotes their fusion with endosome membranes and releases them into the cytoplasm.

DODAP and DODMA are the first ionizable lipids used for RNA delivery. By designing to improve the efficacy of DODMA, DLin-MC3-DMA was produced. This is the first ionizable lipid used in FDA-approved pharmaceutical formulations: siRNA drug patisiran (Onpattro). In addition to effectively and safely delivering siRNA, DLin-MC3-DMA is also used for mRNA delivery.

In addition to seeking to improve efficacy, people are paying more and more attention to improving the specificity of drugs, especially for vaccines and immunotherapy. Lipid 11-A-M58 with polycyclic adamantane tail and lipid 93-O17S59 with cyclic imidazole head have been designed to target T cells in vivo. Although the mechanism is unclear, the cyclic groups of these lipids are essential for targeting T cells.

Although ionized lipids are arguably the most important component of LNP, the other three lipid components (cholesterol, auxiliary lipids, and pegylated lipids) also promote the formation and function of nanoparticles. Cholesterol is a naturally occurring lipid that enhances the stability of nanoparticles by filling the gaps between lipids and helps to fuse with endosomal membranes during the process of uptake into cells.

Auxiliary lipids regulate the fluidity of nanoparticles and enhance their efficacy by promoting the lipid phase transition that helps the membrane and endosomes fuse. The choice of the best auxiliary lipid depends on the ionizable lipid material and RNA carrier. For example, for lipid-like materials, saturated auxiliary lipids (such as DSPC) are best for delivering short RNA (such as siRNA), and unsaturated lipids (such as DOPE) are best for delivering mRNA. DSPC has been used in FDA approved SARS-CoV-2 vaccine mRNA-1273 and BNT162b2.

The PEGylated lipid component of LNPs is formed by combining polyethylene glycol (PEG) with anchoring lipids (such as DMPE or DMG). Hydrophilic PEG can stabilize LNP, regulate the size of nanoparticles by limiting lipid fusion, and increase the half-life of nanoparticles by reducing non-specific interactions with macrophages. Both mRNA-1273 and BNT162b2 SARS-CoV-2 vaccines contain PEGylated lipids.

Although the clinical progress is not as good as LNP, polymers have similar advantages to lipids and can effectively deliver mRNA. Cationic polymers concentrate nucleic acids into complexes of different shapes and sizes, which can enter cells through endocytosis.

Polyethyleneimine is the most widely studied nucleic acid delivery polymer. Despite its superior efficacy, its toxicity limits its application due to its high charge density. In addition, several biodegradable polymers with less toxicity have been developed. For example, poly(β-amino ester) performs well in mRNA delivery, especially to the lung.

A new type of lipid-containing polymer has recently been developed, called Charge Change Releasable Transporters (CARTs), which can effectively target T cells. It is very difficult to manipulate T cells. Therefore, CART is a very An attractive delivery material with great potential in the field of mRNA vaccines and gene therapy.

In addition to lipid and polymer carriers, peptides can also deliver mRNA into cells, thanks to the cationic or amphiphilic amine groups (such as arginine) in their backbone and side chains. These cationic or amphiphilic amines The base is electrostatically combined with mRNA to form a nanocomposite. For example, a membrane fusion cell penetrating peptide containing a repeated arginine-alanine-leucine-alanine (RALA) motif.

The arginine-rich protamine peptide is positively charged at neutral pH and can also concentrate mRNA and promote its delivery. The complex of protamine and mRNA activates the Toll-like receptor (TLR7, TLR8) pathway that recognizes single-stranded mRNA. Therefore, it can also be used as an adjuvant for vaccines or immunotherapy applications. CureVac AG is evaluating RNActive, a delivery platform containing protamine, for clinical trials of melanoma, prostate cancer and non-small cell lung cancer.

Finally, squalene-based cationic nanoemulsions can also deliver mRNA. These nanoemulsions are composed of oily squalene cores. Some squalene preparations, such as Novartis’s MF59, are used as adjuvants in FDA-approved influenza vaccines. MF59 causes cells at the injection site to secrete chemokines, thereby recruiting antigen-presenting cells, inducing monocytes to differentiate into dendritic cells, and enhancing antigen uptake by antigen-presenting cells. The mechanism by which squalene-based cationic nanoemulsions escape from endosomes and transport mRNA into the cytoplasm is unclear.

A recent study used a systemic selection process based on cell culture to identify new UTRs, which significantly increased the protein expression of IVT mRNA. Compared with the human β-globin 3’UTR, these sequences can induce the relevant transcript to produce approximately 3 times the protein.

In addition, an interesting new form of vaccine was recently reported. This method uses mRNA encoding alphavirus RNA-dependent RNA polymerase plus a second mRNA encoding antigen to make it replicable in the cytoplasm. This system can effectively induce a protective immune response in mice at a very low dose (50ng). These findings are particularly attractive because the use of low doses reduces the cost of vaccine production. The absence of delivery materials further reduces costs, simplifies manufacturing, and increases the possibility of vaccine freeze-drying and storage at ambient temperature.

In terms of production, in addition to cleancap technology, a simple method of purifying mRNA by adsorbing double-stranded RNA contaminants to cellulose (a cheap and abundant polysaccharide) has recently been developed. Studies have proved that this highly scalable and inexpensive method is as effective as high-performance liquid chromatography for removing dsRNA contaminants in IVT mRNA samples.

Another lipid complex preferentially targets dendritic cells after systemic administration. The use of mRNA vaccines to selectively target DCs to induce a strong immune response is a potentially key discovery, and this platform has proven its promise in clinical trials.

In the past few years, extremely important progress has been made in the field of mRNA vaccines, and has provided evidence for the feasibility of this new vaccine model.

There are also many areas that need in-depth research and a more comprehensive understanding of the mechanism of action of various mRNA vaccine types to further optimize mRNA vaccine technology.