HBV cccDNA can predict postoperative overall survival of HBV-related liver cancer and extrahepatic metastasis. In the case of non-differential pre-dilution, the level of cccDNA in liver tissue adjacent to cancer was detected, ranging from <2 × 103 to 123.0 × 106 copies/g. Multiple linear regression analysis showed that cccDNA was independently correlated with HBeAg and serum HBV DNA levels (P <0.001 and P = 0.012).

Editor’s note: Quantitative evaluation of HBV cccDNA is critical to the development of antiviral therapy for chronic hepatitis B. Recently, the results of a Taiwan study published on cancers showed that a newly developed peptide nucleic acid (PNA) clamped qPCR method was used to quantify cccDNA, and it was found that the level of cccDNA in liver tissues adjacent to cancer is related to the overall survival (OS) of patients and extrahepatic Metastasis is independently related, regardless of whether the patient has achieved virological suppression. This indicates that in HBV-related liver cancer, virologically suppressed patients can further benefit from new antiviral drugs designed to reduce cccDNA.

New antiviral treatments for HBV focus on the elimination of cccDNA. However, the effective range of traditional cccDNA-specific quantitative PCR (qPCR) is limited, which hinders the reliability of comparisons between biopsy-derived cccDNA levels. In addition, the role of cccDNA in the prognosis of HBV-related liver cancer is still unclear. This research has developed a peptide nucleic acid (PNA) clamped qPCR method, which can provide a wider specific cccDNA quantification range (effective range up to 5 logs).

In the case of non-differential pre-dilution, the level of cccDNA in liver tissue adjacent to cancer was detected, ranging from <2 × 103 to 123.0 × 106 copies/g. Multiple linear regression analysis showed that cccDNA was independently correlated with HBeAg and serum HBV DNA levels (P <0.001 and P = 0.012).

Multivariate of tissue HBV cccDNA and clinicopathological and virological parameters

In the subgroup where serum HBV DNA was not detectable after surgery, the tissue distribution pattern of HBsAg and cccDNA levels could predict the outcome after surgery. 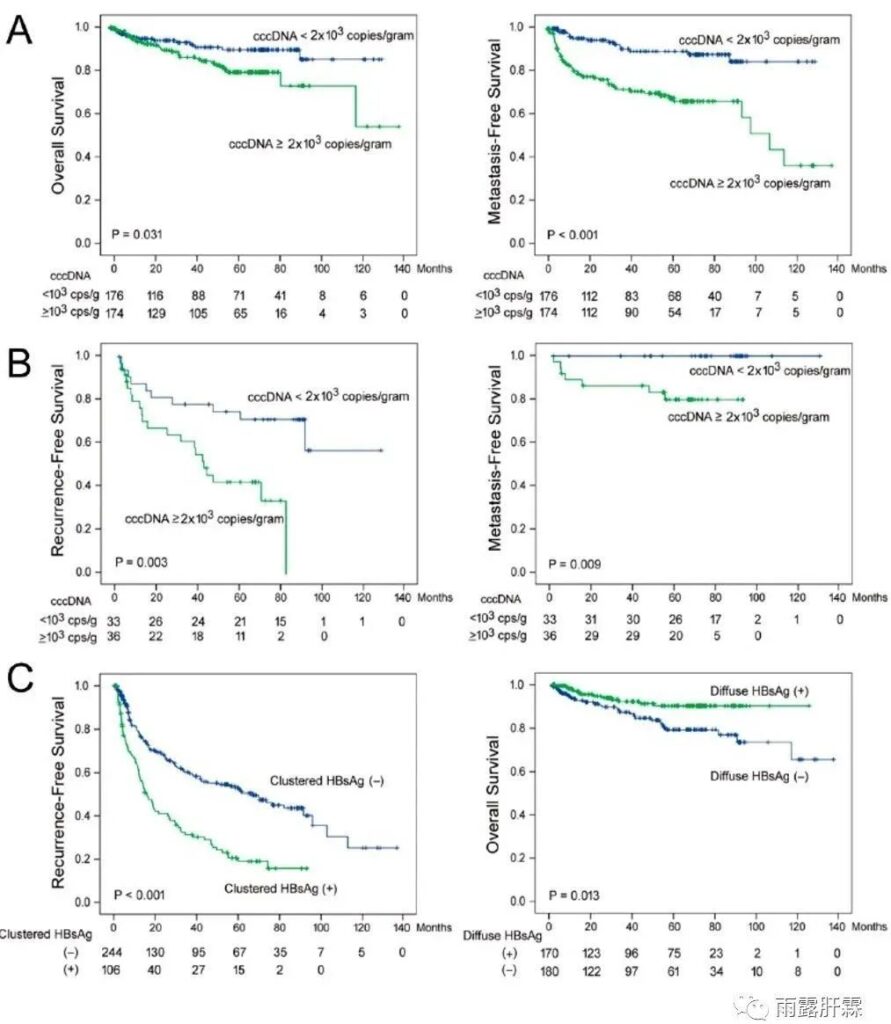 The relationship between cccDNA level and postoperative outcome

(A. Overall patients; B. Patients with undetectable HBV DNA;

The recurrence rate of HBV-related liver cancer after surgery is relatively high. If there are good predictors, it will help reduce the recurrence rate. The study found that the level of cccDNA in the liver tissue adjacent to the cancer was independently correlated with the overall survival of patients after surgery and the absence of extrahepatic metastasis, which has a certain predictive value.

Elimination of cccDNA in the liver is the standard for complete cure of chronic hepatitis B. However, the detection technology for cccDNA is not mature enough and there is no standard detection method. Therefore, alternative indicators of cccDNA are also being explored in terms of biological markers of chronic hepatitis B. Whether it can be used to predict the recurrence of HBV-related liver cancer requires further research. explore.