A total of 1005 patients were enrolled in the study, who were randomly assigned to the atilizumab group or BSC group at a ratio of 1:1, and received up to 16 treatment courses. The primary endpoint was PD-L1 positive (PD-L1 expression ≥1%) stage II-IIIA patients, all randomized stage II-IIIA patients, and intention-to-treat (ITT) DFS in patients with stage IB-IIIA determined by the investigator. The key secondary endpoints are OS (overall survival) in overall and ITT IB-IIIA stage subjects.

In stage II-IIIA patients whose tumors express PD-L1≥1% (PD-L1 positive), compared with best supportive care (BSC), treatment with atilizumab after surgery and chemotherapy can make The recurrence or mortality of stage II-IIIA non-small cell lung cancer patients with PD-L1 expression ≥1% was reduced by 34% (HR=0.66, 95%CI: 0.50-0.88). This part of the population in the atelizumab group The bit disease-free survival (mDFS) has not been reached, while the mDFS in the BSC group was 35.3 months. 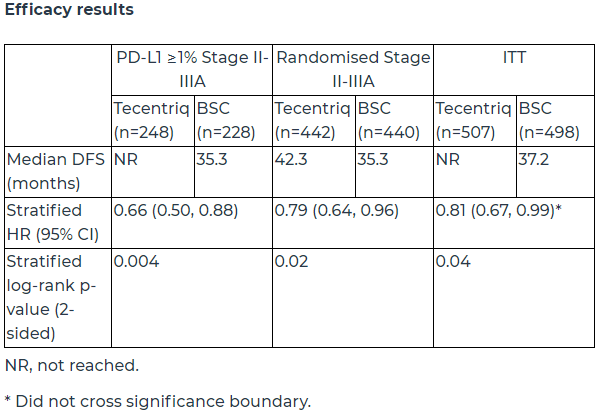 In terms of safety, consistent with the expected results, the incidence of overall adverse events and grade 3-4 adverse events in the atilizumab group was higher than that in the BSC group.

Roche will announce the detailed clinical data of the trial at the ASCO meeting on June 6.

Lung cancer is one of the leading causes of cancer deaths worldwide, causing 1.8 million deaths each year. NSCLC is the most common type, accounting for about 85% of all lung cancers. Adjuvant therapy can reduce the risk of recurrence and provide the best chance of cure.

Nevertheless, about half of patients with stage I-III NSCLC will eventually relapse after receiving treatment. Atelizumab is the first immunosuppressant that has been proven effective in reducing the recurrence rate in phase III clinical trials.