The progress of diagnosis and treatment of non-small cell lung cancer at the ASCO Conference, one article to understand

The 2021 American Society of Clinical Oncology (ASCO) annual meeting ends on June 4-8. At the conference, the results of a number of major studies were announced, bringing abundant evidence-based medical evidence for cancer diagnosis and treatment.

Among them, there are also many new developments in the field of non-small cell lung cancer (NSCLC). What are the exciting contents of the targeted/immunotherapy application of early NSCLC perioperative period? What are the new discoveries in advanced NSCLC?

After the success of targeted and immunotherapy-based systemic drug therapy in advanced NSCLC, the application in early and mid-term surgically resectable patients has also been gradually explored in recent years. Among them, neoadjuvant and adjuvant therapy have become research hotspots. At this ASCO conference, the IMpower010 study proved for the first time that immune adjuvant therapy can bring benefits, and a number of neoadjuvant/adjuvant therapies focused on publishing research results. Immunization and targeted perioperative treatment can be described as a new upsurge.

The 2021ASCO conference announced the IMpower010 research results for the first time in the form of an oral report [1]. This study is also the first prospective randomized controlled phase III clinical trial for adjuvant therapy of single-agent immune checkpoint inhibitors, successfully opening up a new path for the application of immunotherapy in early NSCLC. A total of 1005 patients with IB (≥4cm)-IIIA stage NSCLC were enrolled in the study and received 16 cycles of PD-L1 inhibitor atilizumab (1200 mg, once every 3 weeks) monotherapy at a 1:1 ratio. Or Best Supportive Treatment (BSC).

The results showed that in patients with stage II-IIIA, the atilizumab group significantly prolonged the median disease-free survival (DFS) of patients with PD-L1 TC ≥ 1%, reaching the primary study endpoint (NE vs 35.3 Month, HR 0.66, P=0.004). The 2-year and 3-year DFS rates of the atilizumab group were 74.6% and 60.0%, which were higher than those of the chemotherapy group of 61.0% and 48.2%. In each of the key subgroups, DFS benefit can be observed in atelizumab treatment. This means that adjuvant therapy with atelizumab can bring more benefits than chemotherapy. 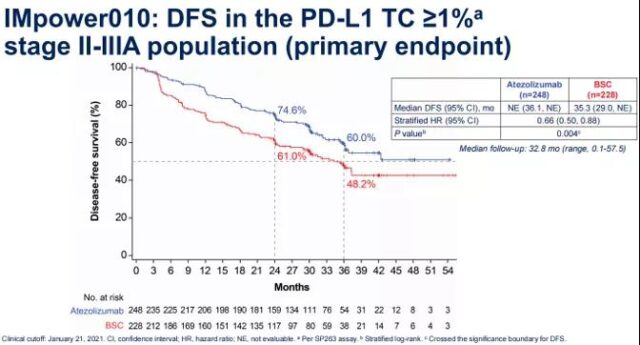 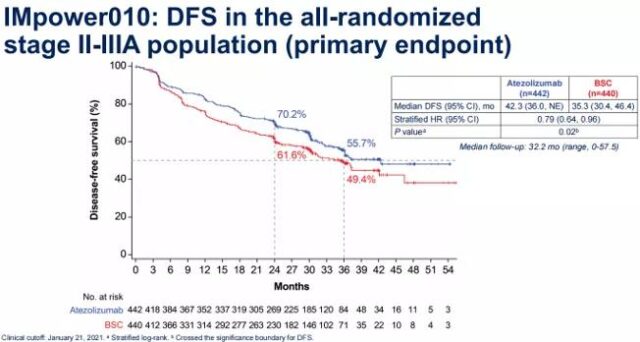 In addition, in the ITT (IB-IIIA) population, the median DFS in the atelizumab group was 42.3 months, which reduced the risk of recurrence by 19% (HR 0.81, P=0.04), but this interim analysis of ITT population DFS does not exceed the boundary of significant difference, and it takes longer to observe the recurrence of the disease. The IMpower010 study reached two main research endpoints at the same time, confirming the feasibility of atilizumab adjuvant therapy, and providing a new diagnosis and treatment strategy for early NSCLC. In terms of safety, the side effects of atelizumab are consistent with previous reports.

In addition to adjuvant therapy, atelizumab has also achieved considerable efficacy in neoadjuvant therapy. The LCMC3 study included patients with stage IB-IIIA NSCLC that could be surgically resected, and ateliizumab was used as a single agent for neoadjuvant therapy before surgery. The results showed that 159 patients received surgical treatment. Among EGFR/ALK-negative patients, the primary pathological response (MPR) rate was 21%, and the MPR rate of patients with high PD-L1 expression (TPS≥50%) was 33%, and MPR and PD-L1 expression are positively correlated [2]. Currently, the phase III clinical study IMpower030 is underway and it is worth looking forward to.

The CTONG1103 study [3] and the CheckMate-816 study [4] became the two hotspots of neoadjuvant therapy research at the ASCO conference. CTONG1103 Phase II study included patients with stage IIIA-N2 EGFR mutation-positive operable NSCLC who were treated with erlotinib or chemotherapy for neoadjuvant therapy before surgery, and continued to use erlotinib or chemotherapy for maintenance after surgery.

This conference updated the OS data. The results showed that the median OS of erlotinib and chemotherapy group was 42.2 vs 36.9 months, which did not reach statistical difference (HR 0.83, P=0.513). The updated median progression-free survival (PFS) of the two groups was 21.5 vs 11.4 months (HR 0.36, P＜0.001). There were no grade 3-4 adverse reactions in the erlotinib group, while the incidence rate in the chemotherapy group was 29.4%.

Studies suggest that erlotinib neoadjuvant therapy can bring PFS benefits compared with chemotherapy, but it has not been converted into OS benefits, but based on the safety of EGFR-TKI, the future application of targeted therapy in neoadjuvant needs to be further explored . 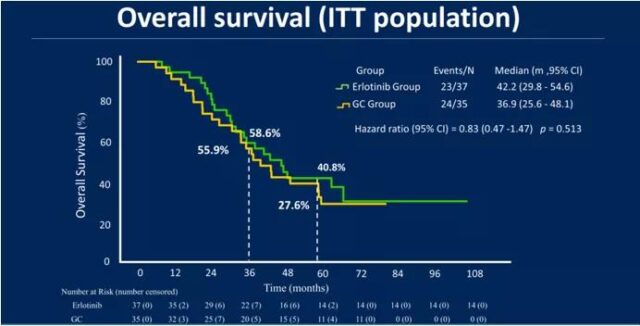 In recent years, the research results of the systemic drug treatment of stage I-III non-small cell lung cancer have been continuously introduced, and some of the results are expected; this is not only the introduction of new treatment concepts, but may even become a milestone in the treatment model, but it will still be in the future. It needs to be further verified in terms of the refined stratification of the applicable population under the guidance of biomarkers.

1)  Atilizumab is safe for the first-line treatment of advanced NSCLC. PD-1 inhibitors and PD-L1 inhibitors cannot be “generalized”

It is an indisputable fact that immunotherapy can bring long-term survival to patients with advanced NSCLC. As the treatment time increases and survival improves, safety has become another important consideration in evaluating and selecting treatment options. A study at the ASCO conference analyzed the occurrence of adverse reactions (AEs) in the first-line treatment of atilizumab, and provided a reference for clinical diagnosis and treatment from a safety perspective.

Table 1 Occurrence of irAEs in atilizumab group and chemotherapy group 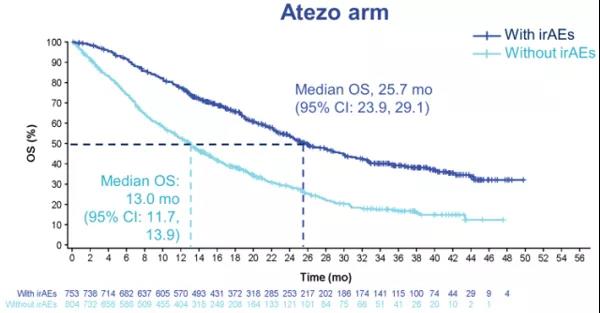 Figure 5 Results of irAEs and OS

Good safety has become a guarantee for multiple joint models of PD-L1 inhibitors and other drugs with different mechanisms of action, providing more choices for clinical diagnosis and treatment. Taking IMpower132 as an example, ateliizumab + chemotherapy first-line treatment of non-squamous NSCLC patients, subgroup data results of Asian patients: median PFS 10.7 months, better than chemotherapy group 5.3 months (HR=0.41) , The median OS was 30.2 months and 21.9 months (HR=0.73). This program has been approved in Japan for the indication of “unresectable advanced/recurrent NSCLC”. This year’s European Lung Cancer Conference (ELCC) reported the results of the subgroup analysis of the study [9], in the Chinese population cohort, the median PFS of the atilizumab group was 8.3 months, which was also better than the chemotherapy group by 5.8 Months (HR 0.73); OS is not yet mature.

In addition to immunotherapy, new targeted drugs have also made many breakthroughs in recent years, and the treatment of “rare targets” has become the focus of attention of global experts. This ASCO conference announced the efficacy of larotinib in the treatment of NTRK fusion-positive advanced NSCLC. The study [10] included a total of 20 patients, 50% of whom had previously received ≥3 lines of treatment. The results showed that the ORR was 73%, the median PFS was 35.4 months, and the median OS was 40.7 months. In patients with brain metastases (n=10), ORR was 63%, median PFS was 7.2 months, and median OS was 17.2 months.

Another foreign study named BFAST [11] analyzed the different treatment results of KRAS mutant NSCLC patients in the real world. A total of 63 patients with KRAS G12C mutations were enrolled in the study, most of which were first-line treatment (50 cases). These patients received first-line and subsequent-line treatment options including chemotherapy (31 cases), immunotherapy (25 cases), chemotherapy combined with immunization Treatment (12 cases) and targeted therapy (3 cases). The results showed that in the first-line treatment, the median OS of patients with TP53 mutation was significantly longer than that of patients without TP53 mutation (17.9 vs 7.9 months, P=0.00022). In addition, patients with STK11 and/or KEAP1 mutations had a significantly shorter median OS, 6.0 vs 19.1 months (P<0.0001). 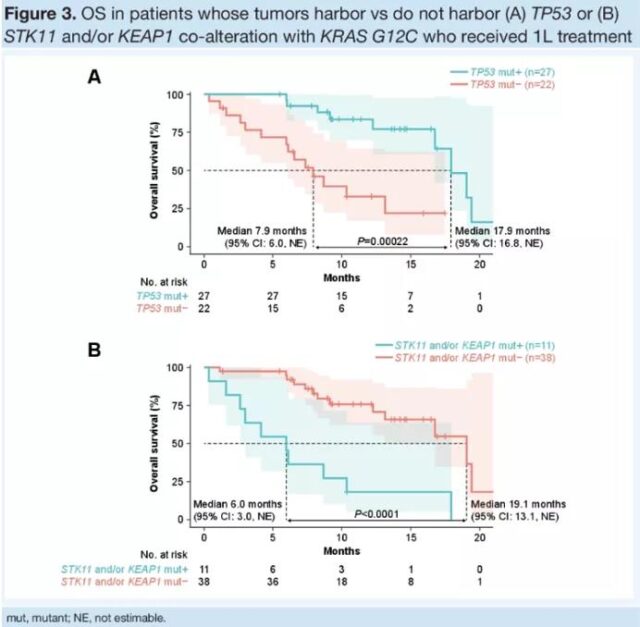 From the initial helplessness to radiotherapy and chemotherapy, targeted therapy, to today’s immunotherapy, people have never stopped exploring the fight against lung cancer. ASCO ended successfully, bringing new knowledge and learning to many clinicians and at the same time more confidence. For lung cancer patients, the “shrinking” of tumors is progress, but it is also meaningful if they can “live in peace” with tumors. The chronicity of tumors will eventually become the direction of our continuous efforts.