The blood-brain barrier (BBB) ​​refers to the barrier between blood plasma and brain cells formed by brain capillary walls and glial cells, and the barrier between plasma and cerebrospinal fluid formed by the choroid plexus. Only specific types of molecules are allowed to pass from the blood. The flow enters the brain neurons and other surrounding cells.

The existence of the blood-brain barrier is of great significance in preventing harmful substances from entering the brain from the blood. However, the blood-brain barrier also prevents the transfer of most small molecule drugs and macromolecules (such as peptides, proteins and gene-based drugs). Limits the treatment of central nervous system diseases (such as neurodegenerative diseases, brain tumors, brain infections and strokes, etc.).

With the increasingly serious population aging problem, neurodegenerative diseases such as Alzheimer’s disease are growing rapidly, and the treatment of brain diseases is facing severe challenges. Therefore, there is an urgent need for drug delivery strategies that effectively break through the blood-brain barrier.

On June 16, 2021, researchers from Columbia University in the United States, together with the National University of Singapore and the University of Chicago, published a study titled: Structural basis of omega-3 fatty acid transport across the blood–brain barrier in the top international academic journal Nature paper.

Omega-3 fatty acids are important for the development of the brain and eyes. They are mainly derived from dietary sources and are converted by the liver into a lysophospholipid called lysophosphatidylcholine (LPC) so as to pass through the blood-brain barrier and blood-retinal barrier from the blood to the brain and retina, respectively.

A protein called MFSD2A is located on the cell membrane of these endothelial cells and acts as a molecular channel for Omega-3 to cross these barriers. However, how MFSD2A mediates the uptake of lysophospholipids carrying Omega-3 fatty acids remains a mystery.

By analyzing the structure of the MFSD2A protein, this mystery can be solved, and this information can be used to design nervous system therapeutic drugs that can hijack this molecular channel, disguised as Omega-3 fatty acid lysophospholipids, and pass the barrier smoothly.

To study the structure of MFSD2A, the research team used a technique called single-particle cryo-electron microscopy (cryo-EM) to cool the sample to a low temperature, observe the molecules on the sub-nanomolar scale, and combine it with new biochemical analysis. This allows them to reveal the atomic-level details of the protein structure, which can then be used in computer simulations to explore its working mechanism.

The researchers used large-scale atomic assembly molecular dynamics simulations, and then used advanced computational biophysics methods to analyze the data in detail to obtain a 3D structure diagram of the transporter protein. 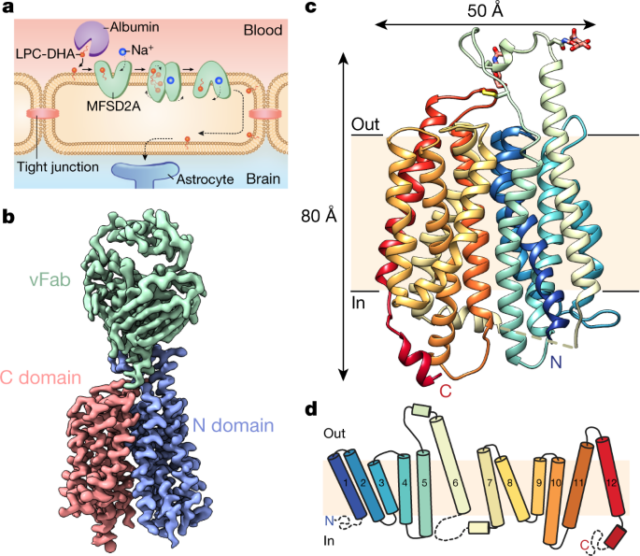 Structural analysis shows that MFSD2A is in the shape of a bowl, and Omega-3 is bound to a specific side of the bowl. The bowl is inverted and faces the inside of the cell, but this is only a static 3D structure of the protein. In reality, the protein must move to transport Omega- 3.

To understand what these movements might look like, the researchers used a 3D model of the protein as a starting point for running computational simulations, revealing how the transporter moves and adjusts its shape to release Omega-3 into the brain. 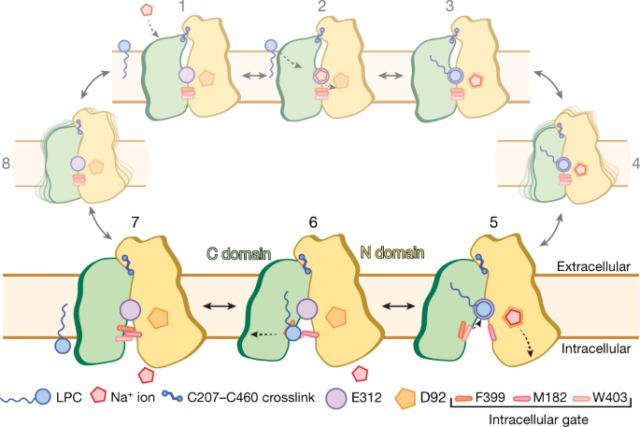 Moreover, the researchers also tested and confirmed the assumptions about the working principle of MFSD2A derived from structural and computational simulations to determine the important specific parts of the protein.

The blood-brain barrier blocks about 98% of drug absorption, limiting the treatment of neurological diseases. The structural information revealed by the study can be used to better design therapeutic drugs for neurological diseases that can be transported through MFSD2A.

The researchers said that further studies are needed to reveal more details about how MFSD2A mediates the transport of lysophospholipids through the blood-brain barrier.