The review of more than 50 target PROTAC degradation agents

The review of more than 50 target PROTAC degradation agents, these scientific problems need to be solved urgently.

In the past few decades, small molecules and monoclonal antibodies (mab) have greatly changed the treatment of cancer. The high selectivity and high affinity of monoclonal antibodies help to reduce side effects, but their molecular size limits cell permeability and cannot target intracellular proteins. Small molecules have good bioavailability and low production costs, but most transcription factors, backbone proteins and non-enzymatic proteins still lack effective therapeutic drugs. These proteins are considered to be “non-drugable” targets.

From the perspective of mode of action (MOA), small molecules work by occupying active pockets; they require high doses to maintain activity, which will increase the risk of off-target and cause adverse effects. In addition, the surface of difficult-to-drug targets is usually flat, making it difficult for traditional small molecules to attach; and changes in the conformation of mutant proteins can also lead to resistance to small molecules. In addition, continuous inhibition of the target protein may lead to feedback activation of downstream signals, leading to overexpression of compensatory protein, which may significantly increase the risk of acquired resistance.

Proteolysis targeting chimera (PROTAC) is a new chemical knockout strategy for protein of interest (POI). PROTAC is composed of three special elements: E3 ubiquitin ligase ligand, POI ligand and linker. The E3 ubiquitin ligase ligand is responsible for the specific recruitment of E3 ubiquitin ligase; the POI ligand is used to target and hijack the POI; the linker part is used to bind the two ligands. The special bifunctional small molecule is a powerful chemical tool that promotes the polyubiquitination of POI and subsequent proteasome-mediated degradation of POI by forming a stable ternary complex, making POI close to E3 ligase (Figure 1 ). 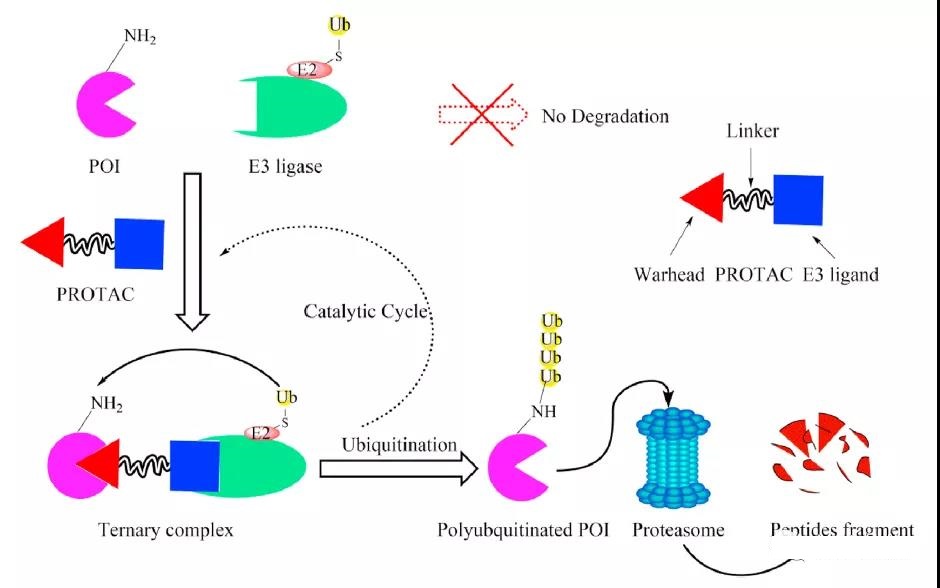 A PROTAC molecule includes a warhead to target the POI (red triangle), an E3 ligand (green square) to recruit E3 ligase and a linker (black line) to connect them together. When the PROTAC molecule approaches POI and E3 ligase, E3 will use E2 ubiquitin conjugating enzyme to transfer ubiquitin to the POI surface. The proteasome will then recognize the polyubiquitination signal and degrade the POI. At the same time, the PROTAC molecule dissociates and participates in the next degradation cycle.

As far as MOA is concerned, PROTAC molecules are essentially different from traditional small molecule inhibitors. PROTAC is an event-driven approach based on the ubiquitin-proteasome system (UPS) that induces transient binding of ubiquitination, thereby eliminating pathogenic proteins. Subsequently, PROTAC can be recovered without reducing its activity and used in the next degradation cycle of the target protein.

This substoichiometrically active MOA avoids high levels of administration and corresponding adverse reactions. Considering that disease-causing proteins must be re-synthesized within a certain period of time, the accumulation of target proteins will be delayed. In addition, degradation is an iterative deployment process of POI. Compared with traditional small molecules, POI is not easy to increase the overexpression or mutation of target genes. To a certain extent, PROTAC can solve the acquired resistance caused by traditional inhibitors. Because the degradation mechanism of PROTAC is fundamentally different from that of inhibitors, the warhead only needs to have a slight affinity for the receptor, so in theory, PROTAC may target a variety of refractory drug targets.

In 2001, the pioneer Craig M. Crews developed the first PROTAC molecule. ARV-110 is the first oral small molecule PROTAC androgen receptor (AR) degrader, and clinical trials for the treatment of metastatic castration-resistant prostate cancer are underway (NCT03888612, Arvinas). This article focuses on reviewing the latest progress of PROTAC targeting various proteins, systematically expounding the advantages of PROTAC technology, and discussing in detail the possible challenges and scientific problems that need to be solved in this field.

By searching relevant literature in recent years, according to incomplete statistics, PROTAC has successfully degraded more than 50 target proteins, including: 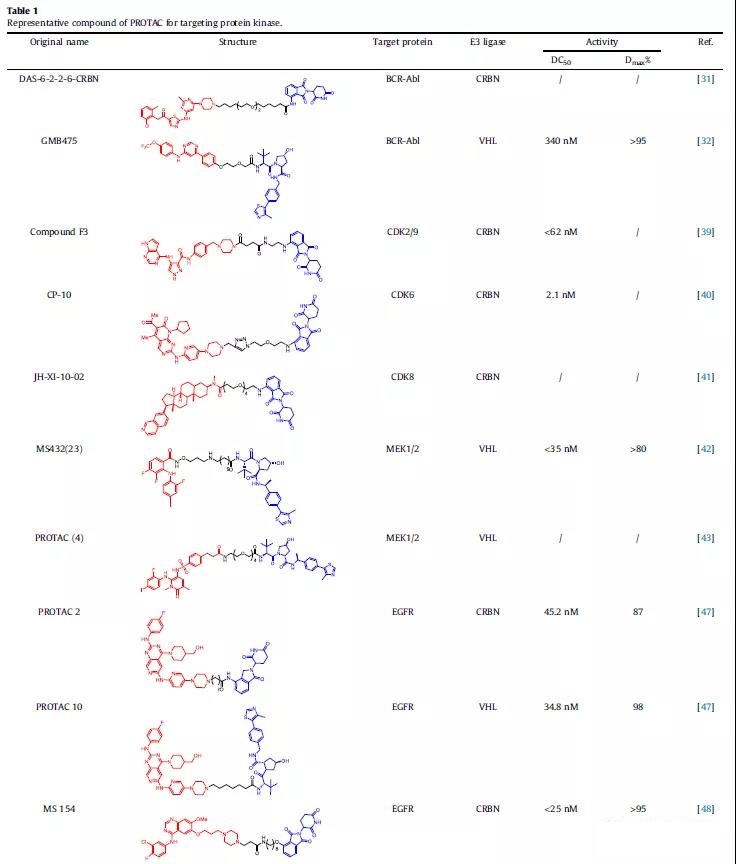 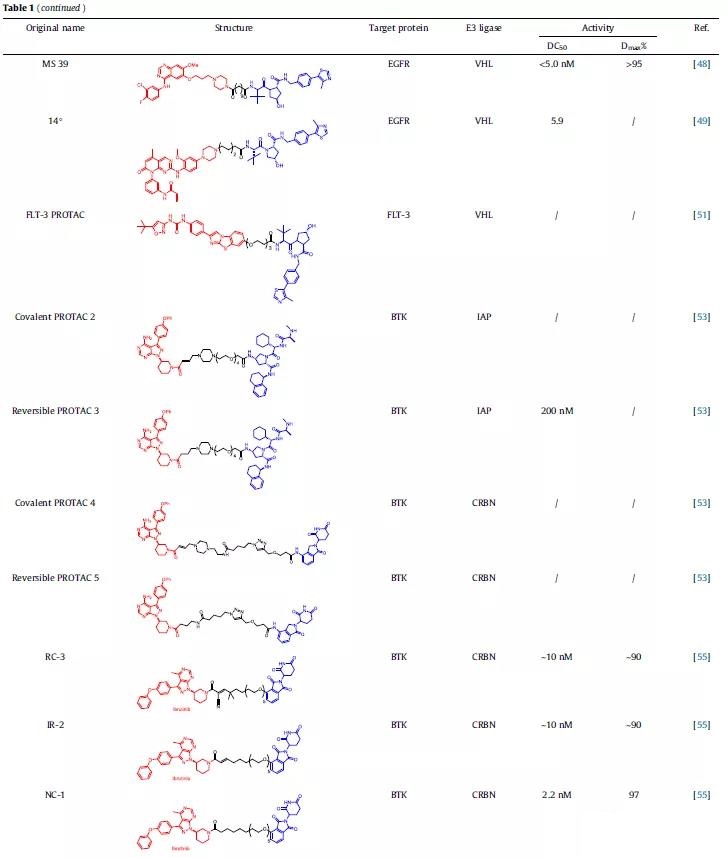 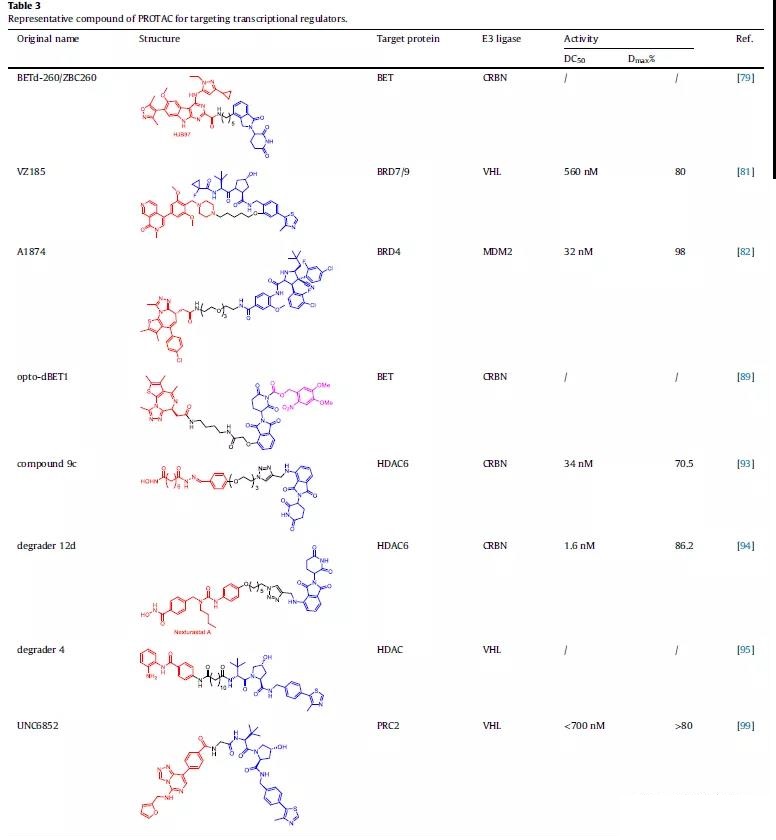 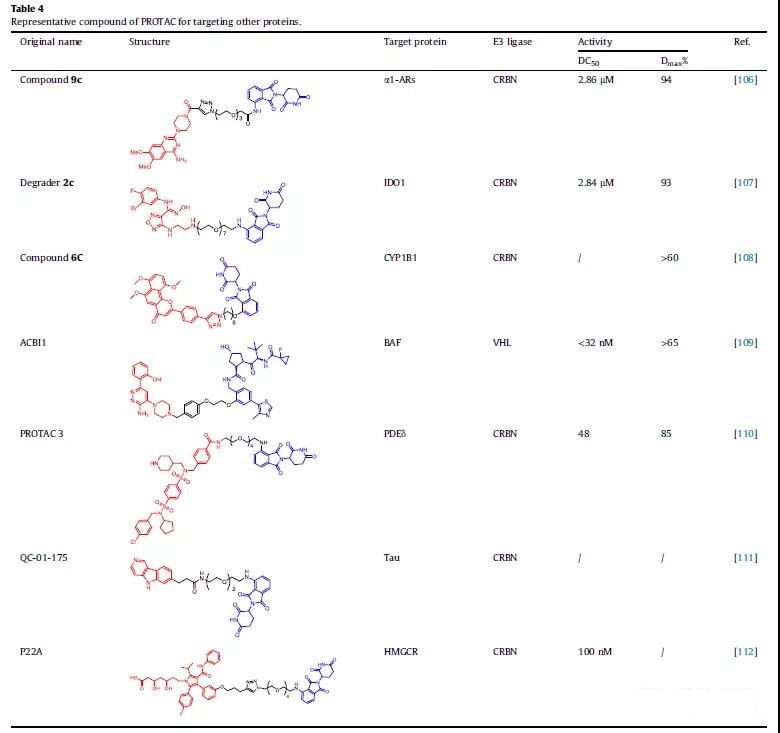 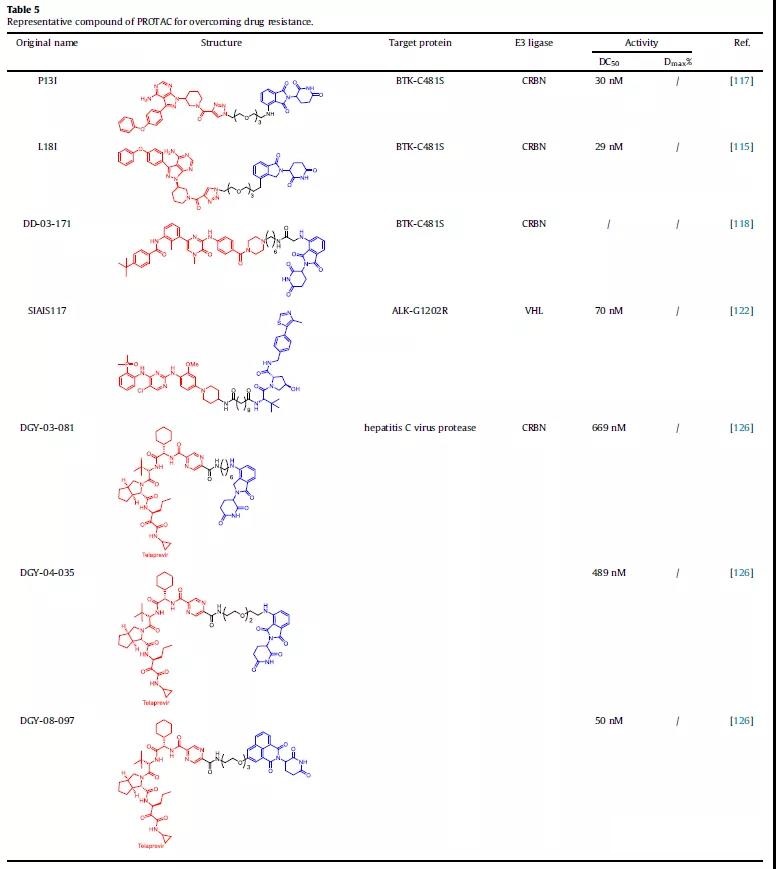 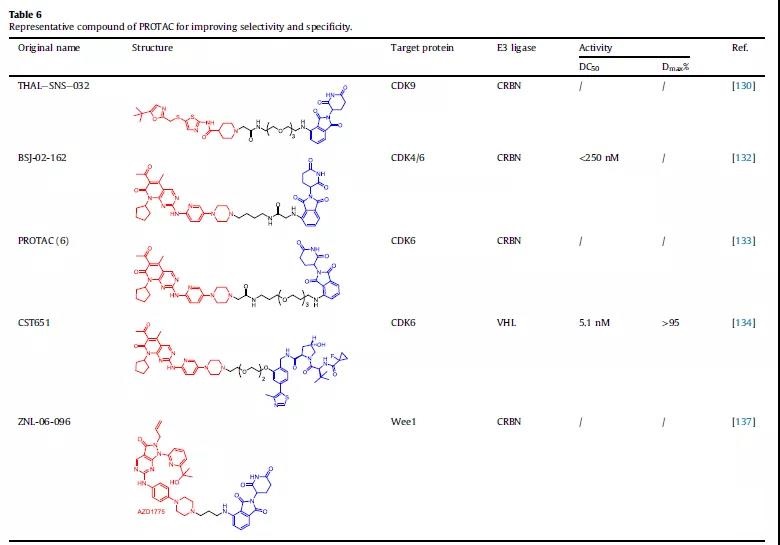 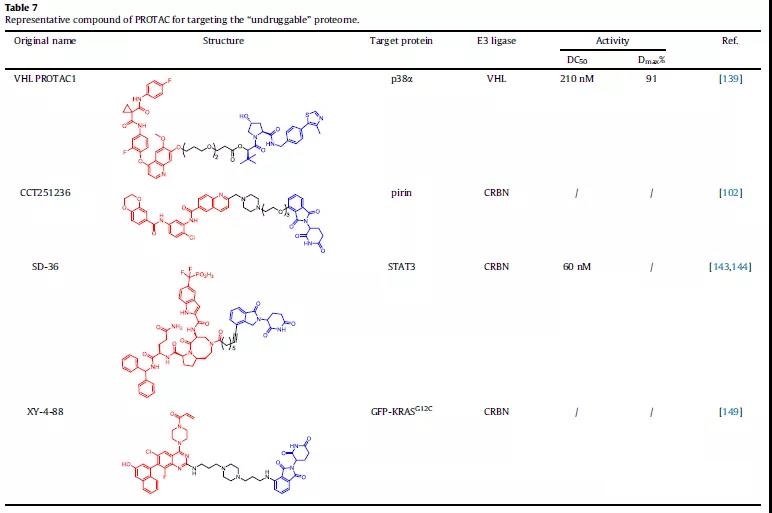 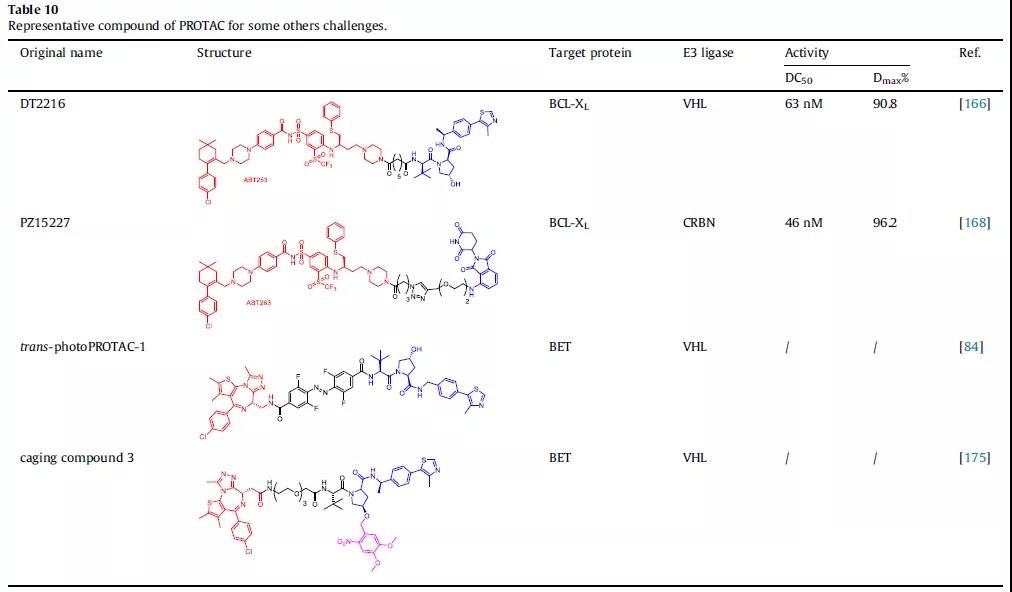 Table 11 Representative PROTAC for degradation of some challenging targets

Not all receptors, enzymes or proteins have the same expression in human tissues, and E3 ubiquitin ligase is no exception. More and more evidence shows that E3 ubiquitin ligase is expressed differently in different tissues. Recently, a study showed that the expression of CRBN E3 ligase and VHL E3 ligase in human platelets is very low. ABT199 is the only BCL-2 selective inhibitor approved by the FDA; and ABT263, a dual inhibitor of BCL-2 and BCL-XL, was rejected due to BCL-XL inhibition triggering targeted and dose-limiting thrombocytopenia. In this context, the development of BCL-XL-dependent tumor-targeted drugs that have no effect on platelets has become imminent. Because the expression level of VHL E3 ligase in platelets is very low, the bivalent small molecule derived from PROTAC provides a strategy for targeting BCL-XL that has no effect on platelets.

ABT263 was transformed into cell-selective BCL-XL PROTAC to obtain DT2216 molecules (DC50=63 nM, Dmax=90.8%). Consistent with speculation, DT2216 not only improves anti-tumor activity, but also reduces platelet toxicity. In addition, DT2216 does not degrade BCL-2, suggesting that the use of PROTAC technology can transform anti-tumor drugs with targeted tissue specificity and dose-limiting toxicity into tumor-selective, tissue-selective, tissue-specific E3 ligases by recruiting tumor or tissue/cell specific ligases. Selective and less toxic drugs.

In short, we firmly believe that using the differential expression of E3 ligase, combined with advanced technologies such as photopharmacology, the PROTAC strategy will find a place in the treatment of local diseases, and ultimately achieve precision medicine.

So far, most PROTAC molecules are outside the classic Lipinski “Five Rules” law. Therefore, PROTAC as a therapeutic drug faces unique challenges. Research on the absorption, distribution, metabolism, excretion and toxicity of PROTAC requires more theory and practice; increasing the uptake and bioavailability of cells to maintain the necessary concentration of PROTAC is still a huge challenge. The first oral AR-PROTAC degradation agent has entered the clinical development stage, indicating that many expected pharmacokinetic challenges such as poor permeability and low bioavailability can be overcome. This article believes that in order to promote more PROTAC drugs into clinical research, the following scientific issues need to be strengthened:

E3 ligase is a key component of proteasome-mediated protein degradation. There are more than 600 E3 ligands known in the human body, but so far less than 1% of E3 ligands are small molecules. At present, more than 90% of the reported PROACs are recruited through a few E3 ligases such as CRBN, VHL, MDM2, and cIAP1. One of the main challenges facing PROTAC is to expand the E3 ubiquitin ligase that can be used in PROTAC technology. Whether a more specific E3 enzyme and its ligand can be found in specific cells or tissues is also a major scientific issue that must be considered.

PROTAC can only effectively and specifically ubiquitinate the target protein when it forms a stable “target protein-PROTAC-E3 ubiquitin ligase” ternary complex. However, complex ternary crystal structure systems are difficult to capture and identify. At present, there are few methods to study PROTAC-mediated ternary complexes, mainly including time-resolved fluorescence energy transfer (TR-FRET), isothermal titration calorimetry ( ITC), AlphaLISA, surface plasmon resonance (SPR), etc. Although these methods have shown certain value in the analysis of ternary complex formation, they cannot fully summarize the requirements of the ubiquitin-proteasome system for POI degradation. The current work mainly focuses on the stability of the “target protein PROTAC” or “ubiquitin ligase PROTAC” binary complex, and there are few reports on the crystal structure of the PROTAC-mediated ternary complex. More and more evidences show that feasible ternary complex formation parameters are very important for the cell viability and ideal properties of PROTAC. The stability of the target protein-PROTAC-E3 ternary crystal structure needs further study.

The linker design of PROTAC is also critical. The linear alkyl chain or PEG structure has a high risk of oxidative metabolism, which greatly reduces the concentration and duration of drug exposure, and accelerates the excretion of PROTAC molecules from the body. At present, the design principles guiding the design of the length and composition of the PROTAC intermediate connecting chain are not yet clear.

Reliable biological activity evaluation cannot be ignored. From the perspective of PROTAC’s MOA, it has substoichiometric activity. It is not advisable to use traditional methods to determine the pharmacokinetic (PK) and pharmacodynamic (PD) curves of PROTAC. A recent study showed that the disconnect between PK and PD and the low nanomolar potency are beyond the detectable PK range of PROTAC, which constitutes an obstacle to scientific and safe dosing.

In addition, the ternary system is often more complicated than the binary system. Only the effective synergy between the two ligands can effectively initiate degradation. When treated with a certain concentration of PROTAC, researchers often observe mild or severe “hook effects”, which set obstacles to determining the ideal treatment window. The appearance of the Hook effect means the independent binding of POI and E3 ligands, while preventing the formation of ternary complexes, which may cause serious side effects. Therefore, the establishment of a rapid, effective, accurate, repeatable, and reliable PROTAC biological activity evaluation system is a hot research topic.

Finally, the complexity of PROTAC molecules poses a huge challenge to medicinal chemists. The large-scale synthesis of PROTAC molecules largely depends on the connection site, connection length, etc., which are a major obstacle to systematic research. The “click reaction platform” provides chemists with tremendous benefits in terms of expanding the scale of synthesis and expanding the space of the compound library.

The generation of effective PROTAC molecules through the “click reaction platform” has been widely reported. The Soural team used solid-phase synthesis technology to quickly and efficiently synthesize the PROTAC molecule based on thalidomide. Biao Jiang et al. developed a chemoselective alkylation reaction of lenalidomide with different halides promoted by organic bases under mild reaction conditions, which provides a highly functionalized PROTAC library based on lenalidomide. new method.

In the future, chemical researchers should devote themselves to the development of efficient, green, and mild reaction conditions, significant chemical selectivity and regioselectivity, and pollution-free synthesis technology or platform. To provide enough active pharmaceutical ingredients (API) for the clinic, large-scale production also needs further exploration.

Any drug that interferes with the regulation of endogenous proteins requires a perfect design and satisfactory specificity to regulate a series of biological events, which is a historic challenge. It is believed that through the joint efforts of researchers in the academic and pharmaceutical circles, these challenges will be successfully resolved in the near future.