Self-immune “star” target IL-17: from discovery to targeted therapy.  IL-17 (IL-17A, CTLA-8) was cloned for the first time in 1993, but its function has not been clearly studied for nearly ten years.

In 2005, the discovery of a new CD4+T helper cell (Th) population characterized by the expression of IL-17 made IL-17 begin to receive attention.

This subpopulation was later called “Th17 cells.” Although Th17 cells are generally considered to be the main source of IL-17, CD8+ cells have also been shown to produce this cytokine and are called “Tc17.”

In addition, many innate immune subgroups can also produce this cytokine, including innately acting lymphocytes, such as γδ-T cells, some natural killer T (NKT) cells and TCRβ+ natural Th17 cells.

With the deepening of research, it has been discovered that the pro-inflammatory properties of IL-17 are the key to its host protection. On the other hand, unrestricted IL-17 signaling is also related to the progression of autoimmune diseases and cancer.

In 2016, antibodies against IL-17A (secukinumab and ixekizumab) were approved for the treatment of moderate to severe plaque psoriasis. Although trials of ankylosing spondylitis and psoriatic arthritis have good data, IL-17 blockers are less effective in other diseases.

Therefore, although targeting IL-17 has been an effective method for the treatment of certain diseases, the mechanism of the local and systemic effects of IL-17 still needs to be further studied.

Types and structure of IL-17 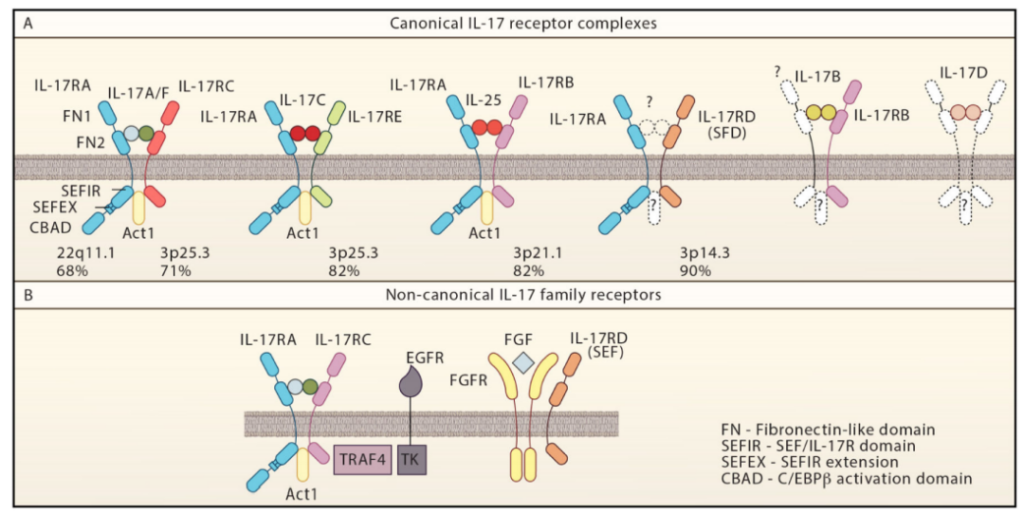 IL-17RA is a receptor used by several other IL-17 family ligands. IL-17 and IL-17F exist as homodimers or heterodimers, and various forms of cytokines induce downstream signals through specific dimers of IL-17RA and IL-17RC receptor complexes.

Act1, a linking molecule between IκB kinase and stress-activated protein kinase (CIKS), is a unique cytoplasmic adaptor required to activate all known IL-17-dependent signaling pathways. Act1 contains a SEFIR domain and interacts with IL-17RA and IL-17RC through the same type of SEFIR.

In addition to the SEFIR domain, the IL-17RA mutation study also identified a non-conserved region required for IL-17RA’s signaling function. This region is an extension of about 100 residues beyond SEFIR, called “SEFIR extension” (SEFEX).

X-ray crystallographic studies on the cytoplasmic domain of IL-17RA confirmed that the SEFIR and SEFEX regions together constitute a single composite structural motif. SEFIR domains also exist in other IL-17R family members, although their function is not yet clear.

The intracellular tail of IL-17RA also contains a distal domain that is different from SEFIR/SEFEX, because the first study of this motif is based on the correlation with the activation of transcription factor CCAAT/enhancer binding protein (C/EBP) β , Therefore, the region was named “C/EBPβ activation domain” (CBAD).

However, IL-17A can only weakly activate NF-kB. Through gene chip screening of IL-17A-induced downstream genes, people have discovered other transcription factors C/EBPβ and C/EBPδ. 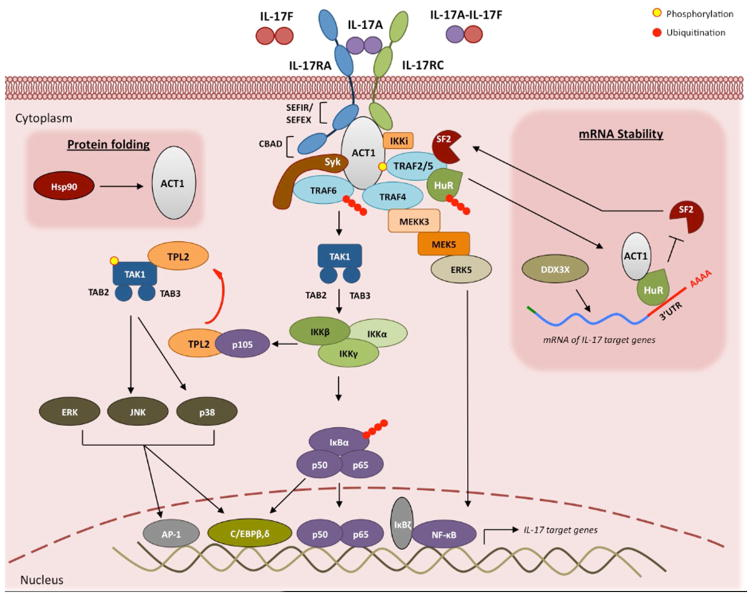 In addition to activating inflammatory genes through de novo transcription, IL-17 also promotes the expression of a large number of gene targets by controlling the stability of mRNA.

In fact, mRNA stability seems to be one of the mechanisms by which IL-17 works synergistically with other cytokines such as TNF-α. In addition, many inflammatory cytokines and chemokines induced by IL-17 are inherently unstable. Since IL-17 is less stimulating to NF-κB and only moderately induces the transcription of inflammatory genes, it controls IκBζ, etc. The ability of factors to indirectly control the expression of inflammatory genes is the basic feature of IL-17-mediated inflammation.

E3 ubiquitin ligases such as Act1 and TRAF6 are central activators of the IL-17 pathway. The protein containing β-transduction protein repeats (β-TrCP) is an F-box E3 ubiquitin ligase, which is stimulated for a long time Ubiquitination of the phosphorylated Act1 recognized by the K48 ubiquitin chain triggers Act1 degradation and limits IL-17 activity.

In addition, heat shock protein 90 (Hsp90) is a chaperone that facilitates protein folding and assembly and maintains the integrity of Act1 at the protein level. Inhibition of Hsp90 leads to the proteasome degradation of Act1, thereby down-regulating the activity of IL-17. 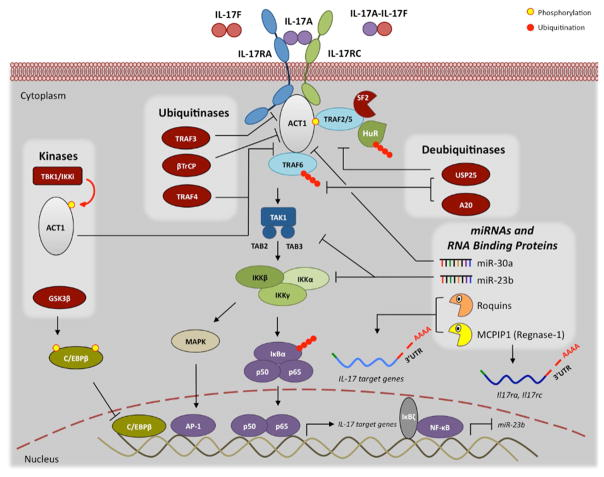 Although the effect of its ubiquitin ligase activity is unclear, both TRAF3 and TRAF4 are inhibitors of IL-17 signaling. TRAF3 binds to the CBAD domain in IL-17RA and interferes with the interaction of IL-17RA-Act1.

In contrast, TRAF4 and TRAF6 compete for the occupancy of the TRAF binding site on Act1.

The contribution of IL-17 and Th17 cells to a variety of diseases is the basis of their clinical targeting. There are many options for targeting IL-17, including direct and indirect effects, and some products are already on the market. 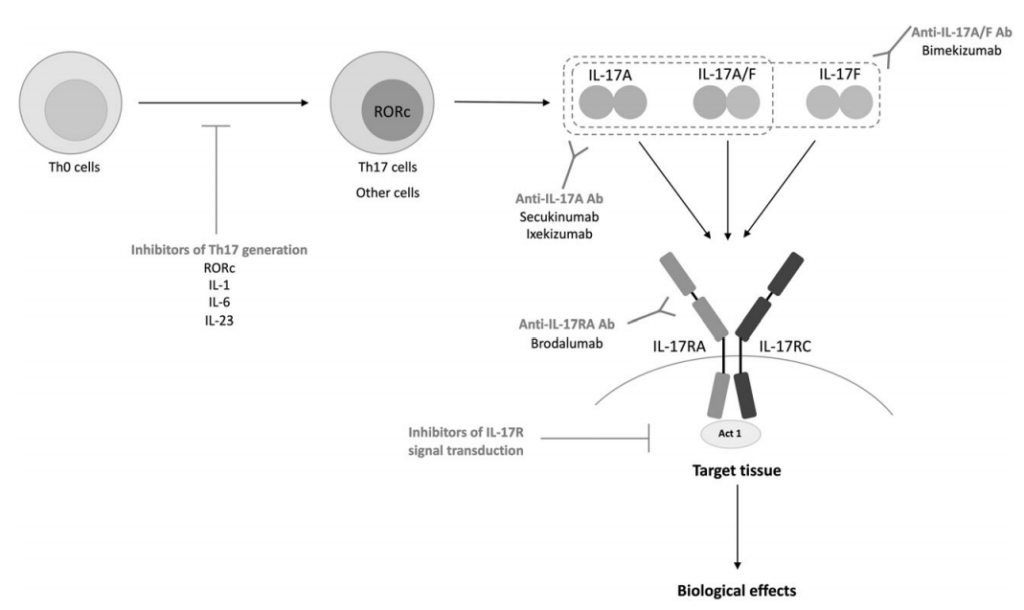 The most direct method to target IL-17 is to use antibodies against IL-17A, such as secukinumab and ixekizulmab; the other method is to block IL-17RA, such as brodalumab.

In addition, bi-specific antibodies against IL-17A and IL-17F, bimekizumab, and anti-IL-17A and TNFα, have entered the clinical stage.

In addition, some products that indirectly target IL-17 have also been on the market. These include inhibitors of IL-6, IL-1 or IL-23, which affect Th17 cell differentiation. Targeting RORc with small molecules or administering IL-2 can also restore the balance between Th17 and Treg. So far, these treatments targeting IL-17 have been fairly well tolerated.

In addition to psoriasis, psoriatic arthritis and ankylosing spondylitis, clinical trials for other diseases are also underway or planned, including skin diseases such as atopic dermatitis, discoid lupus, and pyoderma gangrenosum And hidradenitis suppurativa, as well as systemic diseases such as giant cell arteritis, lupus nephritis, non-alcoholic fatty liver, type 1 diabetes and more recently COVID-19.

In the past 25 years, IL-17 has transformed from a newly discovered cytokine to an approved method for the treatment of inflammatory diseases. Our understanding of IL-17 has also expanded from local effects to systemic effects.

A key issue that needs to be clarified to improve targeting is to understand its contribution to disease heterogeneity, which is crucial for selecting patients with IL-17-driven diseases. In the future, this personalized treatment may improve the response to IL-17 targeted therapy.