Gastrointestinal Stromal Tumors (GIST) are the most common mesenchymal tumors of the gastrointestinal tract. Their biological behavior can range from benign to malignant.

In terms of the incidence of tumors in the entire digestive tract, the incidence of GIST is second only to gastric cancer and colorectal cancer, accounting for 1%-3% of gastrointestinal malignancies.

The annual incidence of GIST is about 10-15 per million, and the annual number of cases in China is about 2-3 million. More than 5,000 new patients are diagnosed in the United States each year. The incidence of GIST varies in different geographic locations, ranging from 4.3-6.8/million to 19-22/million.

It was not until 1998 that scientists finally figured out that V-KIT proto-oncogene mutations are the driving factors for most GISTs. Later, the first patient with advanced GIST was treated with the ABL/PDGFR/KIT multikinase inhibitor imatinib. The FDA approved imatinib for patients with advanced GIST in February 2002. 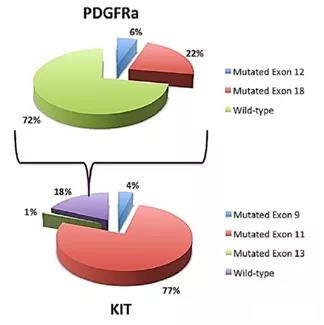 The research results of Chinese scholars showed that exon 11 mutations are also the most common c-KIT mutations in Chinese, accounting for 66.9%, and the most common mutations in PDGFRA gene occur in exons 18 and 12. Compared with the western population, there are no significant differences in the gene mutation sites and mutation types of GIST patients in Chinese patients.

Wild-type GIST has been shown to be related to multiple gene mutations. This article only describes the KIT and PDGFRA mutations of GIST. 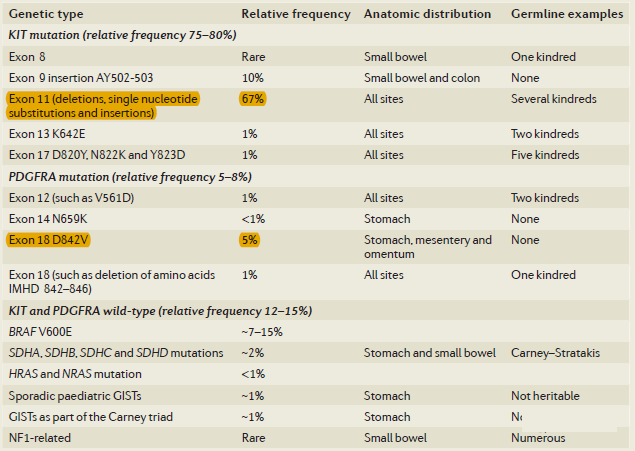 In 1998, it was reported for the first time that there was an activating KIT mutation in GISTs, which was a landmark discovery. It has been confirmed that KIT activating mutations exist in approximately 75% of GIST patients. Mutation activation can allow the malignant proliferation of GIST cells independent of ligand.

KIT is a transmembrane type III tyrosine kinase receptor, and its ligand is stem cell factor (SCF). Under normal conditions, after SCF ligand binds to KIT, it induces its dimerization and activates downstream signaling pathways, such as JAK–STAT3, PI3K–AKT–mTOR, and RAS–MAPK. 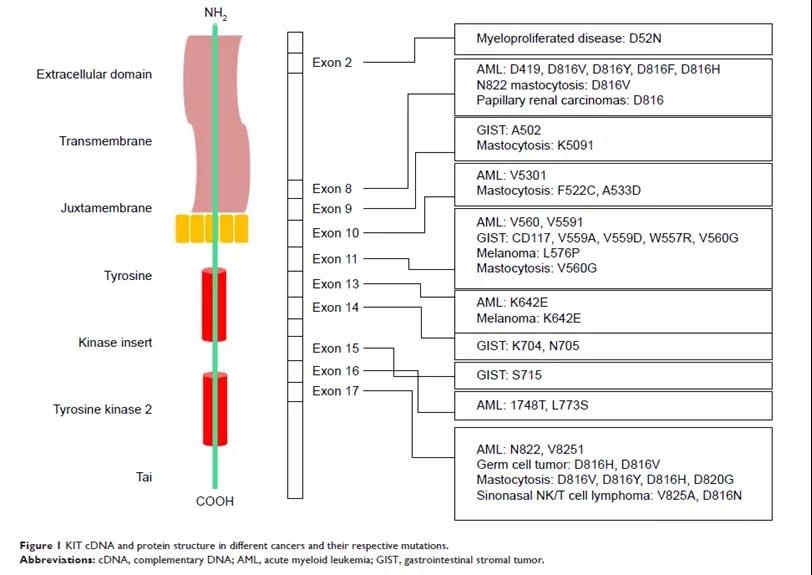 The structure of KIT and its mutation

Two years after the discovery of the KIT activating mutation, imatinib was confirmed to be an effective KIT inhibitor. Another year later, imatinib was used to treat a patient with metastatic GIST and achieved good results. Subsequently, a large cohort clinical trial using imatinib to treat patients with advanced GIST achieved remarkable success. Since then, the clinical treatment of GIST ushered in the era of targeted therapy and has become a successful example of precision medicine.

About two-thirds of GIST patients have activating mutations in exon 11 of the KIT gene. The mutation at this position abolished the self-inhibitory function of the KIT paramembrane domain (JM), which resulted in continuous KIT activation. Among the various forms of mutations, deletion mutations are the most common type, followed by point mutations.

Generally speaking, the conformational change of KIT caused by the mutation of exon 11 destroys the receptor’s autoinhibitory domain and allows continuous kinase activation. The vast majority (greater than 80%) of GIST with exon mutations are located in the stomach.

KIT gene exon 9 mutations account for 8-10% of GISTs, 95% of which are the duplication of codons 502 and 503 in the extracellular domain. The resulting conformational changes can mimic the binding of SCF, leading to dimerization and continuous activation. There are few reports of mutations in codon 476.

KIT gene exon 9 mutation is more related to GIST resistance than exon 11 mutation. Mutations in exon 9 of the KIT gene are more likely to occur in the small or large intestine, while only 2% of GISTs in the stomach have mutations at this location.

In vitro studies have shown that mutations in exon 9 of the KIT gene reduce the sensitivity of imatinib. Clinical trials have also proved that in unresectable metastatic GIST, mutations in exon 9 of the KIT gene are an unfavorable marker for overall survival and progression-free survival (PFS). However, this resistance can be overcome by using higher doses of imatinib (800 mg vs 400 mg), and the response rate obtained is almost comparable to that of tumor patients with a mutation in exon 11 of the kit.

Mutations in exon 13 of the KIT gene, such as 1945A>G, are very rare, about 1%. GIST carrying this mutation is usually in the stomach, showing a spindle cell morphology. The functional consequences of mutations at this position are not yet clear; some reports indicate that they are sensitive to imatinib; there are also reports that there are exon 13 mutations in patients who fail to treat imatinib and sunitinib.

PDGFRA is the second most common mutated oncogene in GISTs; its function overlaps with KIT, so PDGFRA and KIT mutations are mutually exclusive in GIST.

Most GISTs with PDGFRA mutations occur in the stomach, usually with epithelioid or mixed epithelioid and spindle cell histology, usually accompanied by mucoid matrix changes.

Although the downstream activation pathway is the same as the KIT mutation, GIST with PDGFRA mutation often has a lower risk of recurrence.

Most of the PDGFRA mutations in GIST occur in exon 18, which can stabilize the kinase activation loop:

Mutations in exon 12 of the PDGFRA gene are the second most common in GIST, and are thought to account for 1-2% of GIST. Exon 12 mutations usually appear as deletions rather than duplications, and 1821T>A is a common site, resulting in the substitution of Val561Asp at the protein level.

The paramembrane domain of PDGFRA is thought to mediate a self-inhibitory function, and mutations in this inhibitory domain cause excessive activation.

The PDGFRA mutation rarely occurs in exon 14 and the mutation often occurs at codon 659.

Exon 14 is similar to exon 12; therefore, it may also participate in the self-inhibition function of the paramembrane domain and exhibit a similar phenotype.

More than 50% of primary, localized, and resectable GIST can be treated with surgery alone. However, about 25% of patients had metastases at the time of diagnosis, and about 40% of patients relapsed after the initial surgery.

For a long time, the clinical treatment effect of GIST is not good. The effective rate of conventional chemotherapy is <5%, and the median survival time of advanced patients is about 18 months. It was not until 2000 that the multi-kinase inhibitor imatinib was used in the treatment of GIST, and this situation was not improved. .

In this inactive state, imatinib binds to the amino acid Cys673 in the hinge region, Glu640 in the proximal kinase domain, and Asp810 and Phe811 in the DFG motif between the proximal and distal kinase domains; This combination of martinib can stabilize KIT kinase in an inactive conformation.

Imatinib was first used in the clinical treatment of a 50-year-old female with metastatic GIST, and its effect was significant. Large-scale international clinical trials have shown that imatinib has achieved disease control in 70-85% of patients with advanced KIT-positive GIST, with a median progression-free survival of 20-24 months.

At present, imatinib is the first-line treatment for GIST. The median survival time of advanced GIST patients treated with imatinib is about 5 years, and 34% of patients survive for more than 9 years.

Recently, imatinib has also been shown to reduce the risk of recurrence after curative surgery.

Although the application of imatinib has brought breakthroughs in the clinical treatment of GIST, not all GIST patients are effective, and most GIST patients who are sensitive to imatinib will develop drug resistance and eventually progress malignantly.

Resistance to treatment with KIT and PDGFRA inhibitors (such as imatinib) can be divided into two categories: primary and secondary.

Although in the absence of imatinib treatment, the clinical prognosis of KIT exon 11 mutant GISTs is poor, the mutation is highly sensitive to imatinib in vitro, and its half maximum inhibitory concentration (IC50) is less than 100nm; The KIT exon 9 mutation and KIT wild-type GIST are less sensitive to imatinib (approximately 1000 nM)153.

Therefore, the insufficient dose of imatinib in patients with exon 9 mutations may be the cause of obvious drug resistance. 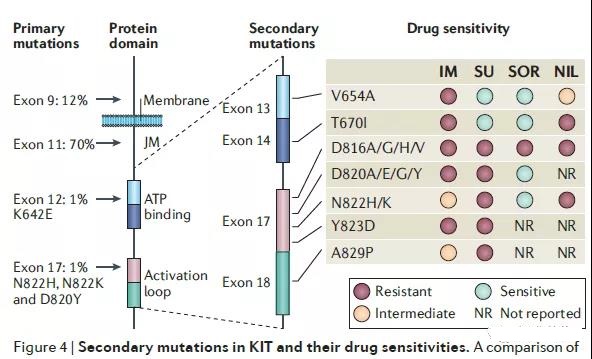 After the initial benefit of imatinib, the vast majority of patients will eventually develop disease progression or secondary drug resistance.

Unlike the KIT activating mutations that are mainly encoded in exons 9 and 11, the stimulating mutations are concentrated in two regions of the KIT kinase domain, which are the domains targeted by imatinib:

Resistance to PDGFRA mutations has also been observed in GIST, the most common being the acquired D842V mutation (activation loop).

What is more alarming is that there is considerable heterogeneous drug resistance between different lesions, and even in different areas of the same lesion. There are reports that

This heterogeneity of drug resistance largely affects the efficacy of rescue TKI therapy after first-line imatinib treatment, because the diversity of resistant minority clones prevents the systemic eradication of GIST cells by any specific TKI.

Although the secondary mutation of KIT is the most common cause of acquired resistance to imatinib therapy, there are many other factors involved, such as down-regulation or loss of KIT and PKC expression, over-expression of IGF1R, and focal adhesions Kinase (FAK), AXL overexpression, etc.

A new generation of targeted drugs

Sunitinib and regorafenib are active against imatinib-resistant GIST and are used as second- and third-line treatments after imatinib fails. Unfortunately, due to the heterogeneity of drug-resistant clones and other reasons, the effective duration of the drug is relatively short.

Sunitinib is effective for changes in KIT exons 13 and 14 (for example, p.V654A or p.T670I) because its binding is not hindered by mutations. However, secondary mutations in the receptor activation loop (A-loop) encoded by KIT exons 17 and 18 are resistant to imatinib and sunitinib.

Regorafenib is used to treat GIST patients after the failure of imatinib and sunitinib. Although it has been shown to be active against certain mutations in the A loop, its clinical benefit is quite limited due to its inability to inhibit the p.D816V mutation, and adverse progress will occur again within a year.

For more than 10 years after this, no new drugs have successfully become GIST drug treatment options. Until January 10, 2020, the FDA approved the latest targeted drug Avapritinib (BLU-285) for gastrointestinal stromal tumors!

Therefore, the market of Ripretinib (DCC2618) further solves the problem of clinical resistance of GIST.